Seventeen years after the events of Sept. 11, 2001, the Northern California 9/11 Truth Alliance will hold its 14th Annual 9/11 Truth Film Festival, featuring Peter Phillips as keynote speaker, films on the research into the tragic events of 9/11/2001, the recent efforts to get a genuine inquiry into the events, and film excerpts revealing information and new evidence about the Robert F. Kennedy assassination, exonerating the accused assassin, Sirhan Sirhan. 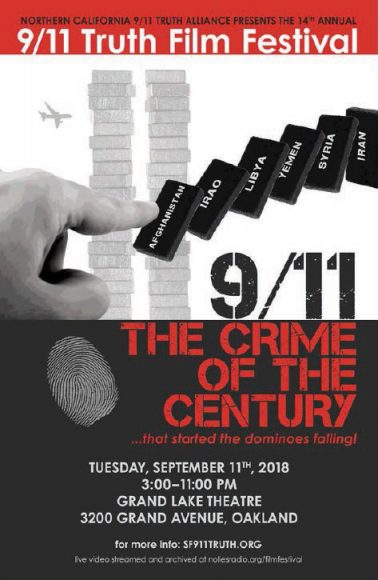 Peter Phillips has been a professor of Political Sociology at Sonoma State University since 1994, the former director of Project Censored from 1996 to 2010, and president of Media Freedom Foundation from 2003 to 2017. He has been editor or co-editor of fourteen editions of Censored, co-editor with Dennis Loo of Impeach the President: The Case Against Bush and Cheney (2006), and editor of two editions of Progressive Guide to Alternative Media and Activism (1999, 2004). His most recent book is Giants: The Global Power Elite from Seven Stories Press (August 2018), in which he discusses individuals who hold the purse strings to the majority of the world’s wealth. Giants identifies by name the members of this club of multi-millionaires, their 17 global financial companies­and includes NGOs such as the Group of Thirty and the Trilateral Commission­and their transnational military protectors, allowing identification of who constitutes this network, where the wealth is concentrated, how it suppresses social movements, and how it can be redistributed for maximum systemic change. 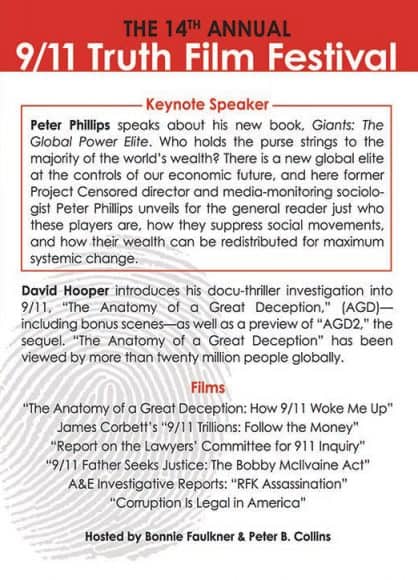 Filmmaker David Hooper will introduce the bonus scenes from his docu-thriller investigation into 9/11, “The Anatomy of a Great Deception,” as well as a preview of part 2 of “The Anatomy of a Great Deception,” his current film in production.
Any newcomers to the 9/11 truth movement are encouraged be in the theater at our start time of 3:00 pm in order to see “The Anatomy of a Great Deception” then. It is an ideal film for those new to the subject, and has been seen by 20 million people!
The film festival, will be hosted by Bonnie Faulkner and Peter B. Collins. The Northern California 9/11 Truth Alliance is one of the first 9/11 truth groups in the country. and has been hosting events since 2002. The group’s mission is to seek and disseminate truths about the terrible crimes committed on September 11, 2001, exposing gaps and deceptions in the official story. The film festival will be streamed live at noliesradio.org/filmfestival. More details can be found on the Northern California 9/11 Truth Alliance website https://sf911truth.org/Suggested donation, $15 to $25, no one turned away for lack of funds.

All events live-streamed by noliesradio.org according to the following schedule:

All 3 video streams will be archived for 10 days after the event so you can arrive late, watch it later, watch it again, or pickup any pieces that you missed the first time.

You can watch on your computer, iphone, android phone, ipad, etc.