From Iraq to Afghanistan to Palestine, Occupation is a Crime
Jobs & Education – Not Wars & Occupation 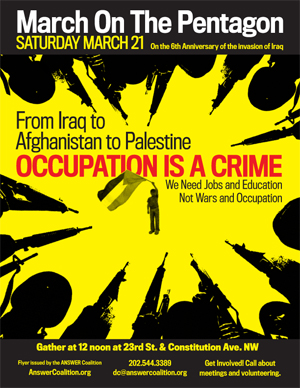 Various coalitions, organizations, and networks are joining together in a March
21 National Coalition to bring people from all walks of life and from all cities
across the United States to take part in a March on the Pentagon on the sixth
anniversary of the Iraq war: Saturday, March 21.

More than 1,000 organizations and individuals have now endorsed the March 21,
2009, March on the Pentagon to say “Bring the Troops Home NOW!”
on the sixth anniversary of the criminal invasion of Iraq.

The thousands who march will demand “From Iraq to Afghanistan to Palestine,
Occupation is a Crime” and “We Need Jobs and Education, Not Wars
and Occupation.” They will insist on an end to the war threats and economic
sanctions against Iran. They will say no to the illegal U.S. program of detention
and torture.

While millions of families are losing their homes, jobs and healthcare, the
real military budget next year will top one trillion dollars–that’s $1,000,000,000,000.
If used to meet people’s needs, that amount could create 10 million new
jobs at $60,000 per year, provide healthcare for everyone who does not have
it now, rebuild New Orleans, and repair much of the damage done in Iraq, Afghanistan
and Palestine. The cost for the occupation of Iraq alone is $400 million each
day, or about $12 billion each month.

The war in Iraq has killed, wounded or displaced nearly one third of Iraq’s
26 million people. Thousands of U.S. soldiers have been killed, and hundreds
of thousands more have suffered severe physical and psychological wounds. The
U.S. leaders who have initiated and conducted this criminal war should be tried
and jailed for war crimes.

The war in Afghanistan is expanding. Robert Gates, Bush’s defense secretary,
who was kept at his post by President Obama, has announced that the troop levels
in Afghanistan may double in the coming months. Both he and Vice President Biden
predicted higher casualties–or what they cavalierly call “an uptick”
in casualties–in the coming period.

We must also act to end U.S. support for Israel’s on-going war against
the Palestinian people. The Bush Administration also gave the green light and
provided the weapons and the money for Israel’s recent war against the
Palestinian people in Gaza. More than 5,000 Palestinians were killed or wounded;
the majority of casualties were civilians, including hundreds of children, in
this high tech massacre. And “We the People” paid the bill, as the
U.S. provides $2.5 billion a year for Israel’s massive military machine.

The March 21, 2009, March on the Pentagon will be a critical opportunity to
let the new administration in Washington hear the voice of the people demanding
an immediate end to wars and occupation, and demanding economic justice. Joint
actions will take place on the West Coat in San Francisco and Los Angeles.