Details from the point of view of organizer, Carol Brouillet, with photos from Terry Koch, Christine, and others

Richard Gage, AIA spoke at the rally and marched with us. (In August NIST came out with its official explanation of the destruction of Building 7 and Architects and Engineers for 9/11 Truth are at the forefront of challenging it.
Support them also by signing their petition for a truly independent investigation.)

Carol Wolman, Green Party Candidate in California District 1, founder of the New Broom Coalition and Impeach Cheney-Bush, also a member of the National Impeachment Network also spoke and marched with us. 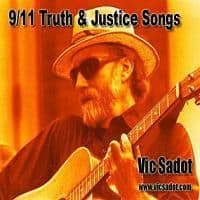 Vic Sadot, who came up with the musical classics “Cheney’s in the Bunker,” and “The Ballad of William Rodriguez” was supposed to be with us, but his truck broke down en route- 800 miles away in Wyoming. This year we did have our best prop–the replica of the Commission Report with the giant holes in it, which was made for the San Francisco Tea Party for 9/11 Truth.

We also passed out thousands of cards to promote our upcoming event. 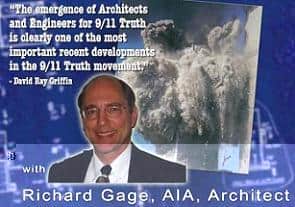 Almost everyone was late to the rally, although I was up at 5:30 am, I had to set up the booth for Northern California 9/11 Truth Alliance at Speedway Meadow before heading to the Panhandle. Richard Gage had just had 2000 new DVDs made which inconveniently needed to be transported to San Francisco that morning, along with the awning for the Architects and Engineers for 9/11 Truth booth, so the 12′ replica- our visually impossible to overlook landmark, was also was late to the rallying point between Oak and Fell, facing Ashbury. Our musician, Vic Sadot, also experienced technological difficulties, his truck broke down in Wyoming, 800 miles away from us, so he didn’t make it. On the other hand, we had some unexpected cameo guest appearances, including Craig Bartmer, a former NYPD officer, first responder, rescue worker, survivor, who is now working for the Cindy Sheehan campaign, and Cosmos, founder of truthaction.org. When Richard set up the sound system, Craig was the first speaker, and shared his story about his personal experiences, and the incredibly bad treatment of first responders, and those suffering from their exposure to the toxic dust in New York. Being so far from New York, his direct narrative was a moving revelation, and a first, to many of us. In addition to the forty or fifty people who came for the rally and march, local people passing through the park were drawn to us, and stayed to hear what we had to say. We had lots of signs, banners, leaflets, Deception Dollars to pass out. Shirley Golub, who ran against Pelosi, brought the Pelosi on a Peach Impeachment banner; Craig brought numerous supporters of Cindy Sheehan and Impeachment. 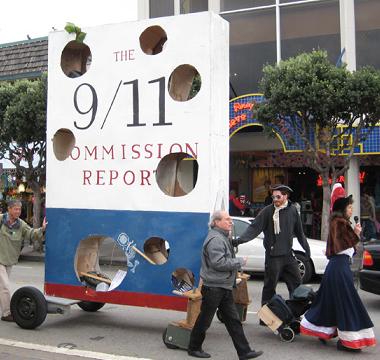 I had hoped that the press would come, drawn by the recent absurd allegations of the NIST Report which claimed “mystery solved” that WTC 7, a 47-story steel structure, fell due to normal office fires–the first time in history that a modern steel-framed high rise building collapsed for this reason. The New York Times had mentioned Richard Gage, AIA, founder of Architects and Engineers for 9/11 Truth who challenged this assertion, and should have been featured prominently in the television news reports NIST’s conclusions. Sadly, none of the media were at the rally (or maybe they came before we got there and didn’t stick around). A very good cover story entitled “Down the 9/11 Rabbit Hole” did come out, however, in the August 27th 2008 issue of the North Bay Bohemian, which featured Ken Jenkins and Richard Gage.

We simply had to “be the media” that day to get out our message to the people that we encountered in the park, on our route, and at the Festival, and later via the internet. John Parulis filmed the speakers and the march and will probably post them somewhere. Richard spoke and explained in detail the overwhelming evidence that the three towers could not have been brought down by two planes and fire, but did exhibit all the characteristics of “controlled demolition.” He also brought beautiful new banners and T shirts. 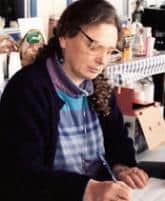 Our next speaker was Carol Wolman, Green Party candidate in District 1, a psychiatrist with a long activist history, and an eloquent writer. Carol actually described the event in her recent article, “Breaking the Spell- with 9-11 Truth.”

Mike Marino echoed Carol with some rousing observations and suggestions. I spoke very briefly, mainly about the logistics, and noting that the day was also the wedding day of Deception Dollar 9/11 Truth activist (and my friend) Blaine Machon. I also noted that there were other marches/events taking place in Brussels, Canada, Australia, England, and across the country.

Somehow, I managed to forget my microphone, but we had more than one sound system, some good music, and a bullhorn or two. With the replica and a police escort (and a permit for a change) we began our march up Ashbury to Haight, down Haight, and on through Golden Gate Park. Most people were supportive and took flyers, and Deception Dollars. The sun shone; it was a beautiful warm, sunny day, and we paused the parade several times for the slower members of the group. 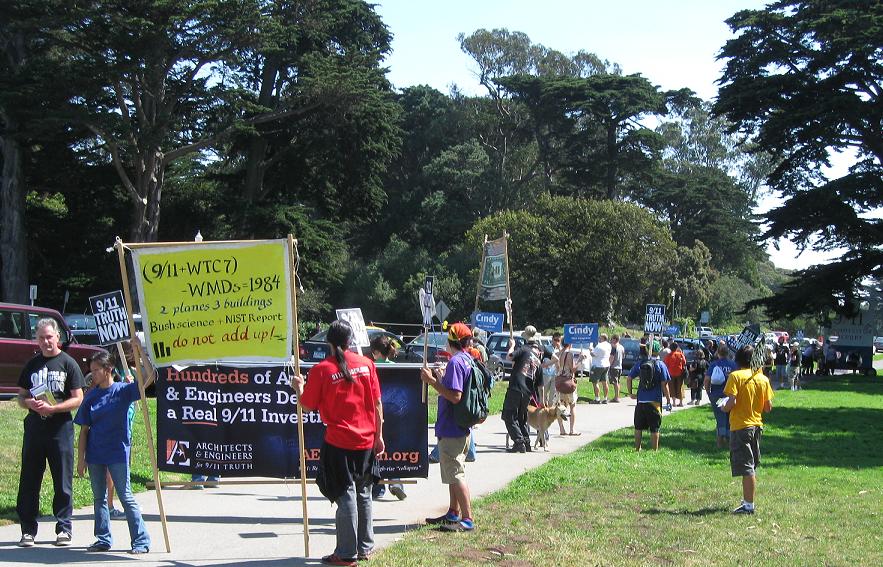 By the time we reached the Festival, however, the field was becoming quite crowded and it was a struggle to get the banners and replica up near the stage, but we did it, and were at least noticed and mentioned by the speakers. I tried to persuade the main organizer to give Richard a couple of minutes, but they were already running 12 minutes late, cutting people’s speaking time and she said, “Try again next year in June.” She did say that they were very glad we were there, and appreciated our work, which was good to hear.

The crowds were receptive to us; we did pass out all the cards we had brought to promote the upcoming 9/11 Film Festival at the Grand Lake Theater on September 11th, plus lots of Deception Dollars and other flyers. We parked the replica near the booths and lots of people found us, talked to us and got books, magazines, DVDs, and our vast assortment of free literature. When the Festival’s music formally concluded at 5 pm, we started playing our 9/11 Truth/Impeachment music and carried on until it got dark.