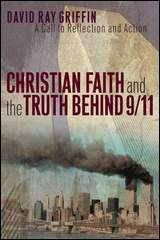 The official publishing house of the Presbyterian Church (U.S.A.) has printed a new book about the Sept. 11 terrorist attacks that has outraged conservatives in the church and elsewhere.

The book, “Christian Faith and the Truth Behind 9/11,” written by David Ray Griffin, a professor emeritus at Claremont School of Theology in California, accuses the Bush administration of carrying out the attacks as a pretext for expanding America’s “demonic” imperial power.

Griffin argues, among other things, that the World Trade Center towers collapsed because of secretly planted explosives — he quotes eyewitnesses who claim that’s what it looked and sounded like — and not because airliners crashed into the buildings, causing fires.

Writers on conservative Presbyterian Web sites have been responding by saying officials of the Louisville-based denomination are out of touch with members and by calling for a boycott of Presbyterian Publishing Corp.

The corporation funds itself from book sales and has editorial independence in deciding what to publish, although its board is elected by the denomination’s legislative General Assembly.

But as word of the book spreads, some Presbyterians lament that it comes as the 2.3 million-member denomination struggles with financial troubles, declining membership and a controversial General Assembly vote to open the door to ordaining gays.

“It is sad that at this time in the life of our denomination, yet another silly and inflammatory step would be taken by the church’s bureaucracy,” said the Rev. Michael Walker, executive director of Presbyterians for Renewal, a conservative group based in Louisville.

The Rev. Parker Williamson of the North Carolina-based Presbyterian Lay Committee asked how “these wild accusations make it through the editorial process.”

Davis Perkins, president of the publishing company, said the book’s stances are not those of the corporation or of the Presbyterian Church (U.S.A.).

But in recent written statements, he defended the decision to publish the book, saying it is “not an off-the-wall polemic but rather a considered work” with “49 pages of extensive scholarly notes.”

Perkins said Griffin’s claims “will not be universally accepted by his readers, but the arguments supporting those claims merit careful consideration by serious-minded Christians and Americans concerned with truth and the meaning of their faith.”

The publisher would not say how many of the 7,500 copies of the book have been sold since its publication last month.

The book was published under the corporation’s prestigious Westminster John Knox imprint, which produces works on theology and popular spirituality from a range of scholars, including liberal and evangelical Christians and also Jews. It also produces popular works such as “The Gospel According to The Simpsons.”

But Perkins said such works haven’t stirred controversy over whether they reflect the church’s “official position.”

Publishing a range of views “is what academic/trade publishers do,” he said. The corporation publishes specifically Presbyterian works under a separate imprint, Geneva Press.

Griffin is part of a wider movement whose books and Web sites challenge the official version of what happened on Sept. 11, 2001. Similar claims by University of Wisconsin-Madison instructor Kevin Barrett have brought calls for him to be fired.

In his book, Griffin claims that the U.S. military could have intercepted the four hijacked jets if it had wanted to and that the hijacker accused of slamming an airliner into the Pentagon lacked the flying skills to do so.

Griffin calls on Christians to oppose the Bush administration’s foreign policy, just as ancient Christians opposed the Roman Empire. He said that although he doesn’t believe in literal evil spirits, such empires have “demonic” power to do great harm.

“Our first allegiance must be to God,” he writes. “… If we believe that our political and military leaders are acting on the basis of policies that are diametrically opposed to divine purposes, it is incumbent upon us to say so.”

Griffin is a member of another Protestant denomination, the Christian Church (Disciples of Christ). The Presbyterian Publishing Corp. has published several of his books on theology.

Griffin said in an interview last week that for the first year and a half after Sept. 11, he believed the attacks simply were carried out by Arab terrorists angry about American foreign policy. “I didn’t think … even the Bush administration would do such a thing,” he said.

But skeptics of the widely accepted accounts convinced him that the attacks were “an inside job” used to justify the administration’s expansion of military powers and the adoption of the doctrine of pre-emptive war, the basis of the 2003 invasion of Iraq.

Griffin has written two previous books on this theme under different publishers. The third book seeks to rally church groups into challenging the official accounts.

Griffin said he’s heard the recent criticisms from Presbyterians but not “from anybody who’s actually read the book.”

“It’s remarkable how certain people can be that this idea is wrong,” he said.

Fair Use Notice
This page contains copyrighted material, the use of which has not always been specifically authorized by the copyright owner. We are making such material available in our efforts to advance understanding of political issues relating to alternative views of the 9/11 events, etc. We believe this constitutes a ‘fair use’ of any such copyrighted material as provided for in section 107 of the US Copyright Law. In accordance with Title 17 U.S.C. Section 107, the material on this site is distributed without profit to those who have expressed a prior interest in receiving the included information for research and educational purposes. For more information go to: http://www.law.cornell.edu/uscode/17/107.shtml. If you wish to use copyrighted material from this site for purposes of your own that go beyond ‘fair use’, you must obtain permission from the copyright owner.