NEW YORK, September 8, 2016 – With the approaching fifteenth anniversary of September 11, 2001, and with 9/11 wars and terrorism continuing unabated, the 9/11 Consensus Panel redoubles its commitment “to provide a ready source of evidence-based research to any investigation that may be undertaken by the public, the media, academia, or any other investigative body or institution.” 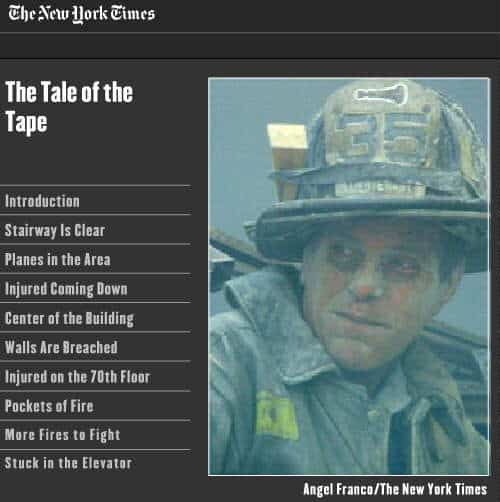 , “The Claim of Widespread Infernos in the South Tower vs the FDNY Radio Transcript,” refutes the official claim that the floors in the area where the plane hit were “infernos,” allegedly causing the melting of steel and the collapse of the Tower.

The second 2016 Consensus Point concerns the omission of evidence in the official narrative that two senior New York City employees reported a massive explosion deep inside World Trade Center (WTC) 7 on the morning of 9/11, which trapped them in a stairwell for 90 minutes.

These two Points build upon the already overwhelming evidence that 9/11, which has been used to promote a “clash of civilizations” with the Muslim world, was a deception across the board: the World Trade Center, the Pentagon, the hijackers, the phone calls from the planes, the fake security video exhibits, and the whereabouts of the political and military commands.

Once this imperialistic 9/11 strategy is understood, many people, including academics, find that they cannot continue to live in its illusory matrix, and devote their time to the task of educating others. Accordingly, some members of the Consensus Panel have promoted the facts about 9/11.

For example, Dr. Niels Harrit, Professor Emeritus of Chemistry, University of Copenhagen, had published more than 60 peer-reviewed papers in the top chemistry journals when he learned, in 2007, of the uncanny collapse of World Trade Center 7. He has since given more than 300 presentations about the World Trade Center, speaking in Denmark, Sweden, Norway, Germany, Holland, France, Switzerland, Spain, United Kingdom, Canada, USA, China, Australia, Russia and Iceland. In May, 2016, he spoke in London, and in August, 2016, at the World Social Forum in Montreal.

Frances Shure, a licensed professional counselor with a specialty in “depth psychology,” explained on Colorado Public Television in August, 2016, the substance of her groundbreaking series, “Why Do Good People Become Silent—Or Worse—About 9/11?”

Dr. Graeme MacQueen, Professor Emeritus of Peace Studies at McMaster University, has published an analysis of the anthrax scare following 9/11 entitled The Anthrax Deception: The Case for a Domestic Conspiracy. During 2016, he gave lectures on 9/11 in Montreal, San Francisco, and NYC.

Two other Panelists, physics teacher David Chandler and engineer Jonathan Cole, maintain a separate website, in which their independent research, which is also affiliated with the 2600-member Architects and Engineers for 9/11 Truth and Scientists for 9/11 Truth, is documented. 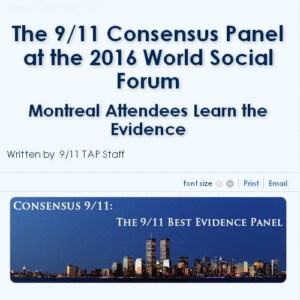 Panel co-founder, Dr. David Ray Griffin, has written an eleventh book on 9/11, Bush and Cheney: How They Ruined America and the World, which will be out in November. In the first part of the book, he lays out many ways in which the Bush-Cheney administration has weakened the U.S. Constitution and caused havoc in the Greater Middle East, which has spilled over into Europe. In the second part, he explains that the official account of 9/11 cannot possibly be true, because it entails at least 13 miracles – things that violate the laws of physics.

Elizabeth Woodworth, the other Panel co-founder, gave a PowerPoint presentation to August’s World Social Forum in Montreal, discussing the development of the Consensus Panel, and some of its lesser-known – albeit shocking – evidence. An hour will be given to this evidence on cable TV this September in British Columbia.


The Panel wishes to thank its fine team of voluntary translators, who have made its scrupulous evidence available in six languages.