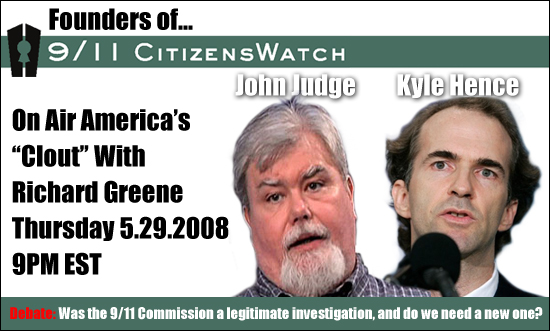 This week’s debate on Air America’s “Clout” with Richard Greene is destined to be a special one. As it stands right now, the two confirmed “pro-Truth” guests to appear are Kyle Hence, and John Judge, the founders of 9/11 CitizensWatch. Citizenswatch was a watchdog group of the 9/11 Commission that worked alongside the 9/11 Family Steering Committee. Along with the families, they called for the resignation of Executive Director Philip Zelikow, and at one point, they started an advertising campaign “demanding that Bush, Cheney, Clinton, Gore and Rice testify publicly, and under oath before the commission.” They ran “billboard advertisements in the Washington metro rail system for four weeks, as well as quarter-page ads in The Washington Post.” Thus far the one confirmed guest who does NOT agree that we need another investigation is Daniel Pinchbeck, the author of 2012: The Return of Quetzalcoatl, Tarcher, 2006 and editorial director of the web magazine, Reality Sandwich. Daniel’s position is that we need to move forward, not back.

9/11 CitizensWatch has appeared on C-SPAN:

6/18/2004:
Following the wrap-up of the National Commission on the September 11 Terrorist Attacks, the 9/11 Citizens Watch held a news conference about the hearings. Officials of the Citizens Watch talked about its watchdog role and insistence on transparency and accountability. There had been concern with conflict of interest. Family members of September 11 attack victims praised the commission’s work, criticized all U.S. intelligence agencies, and answered reporters’ questions.

7/22/2004:
The co-founders of the 9/11 Citizens Watch issued a critique of the September 11 Commission’s report released today. The organization monitored the work of the commission and conducted its own parallel investigation, saying that the commission was not independent and that the commission’s investigative standards were too low. Victims’ family members also spoke. After their presentations the participants answered reporters’ questions.

Kyle Hence is the Executive Producer of “9/11: Press For Truth”, and “In Their Own Words: The Untold Stories Of the 9/11 Families”. John Judge has worked as the Special Projects Assistant to Rep. Cynthia McKinney of Georgia, has been a member of COPA for years, and is writing a critique of the 9/11 Commission Final Report for the 9/11 Research Center.

There are very few people in the world today that understand the problems with the 9/11 Commission as John and Kyle do. Please tell your friends, and family to listen in. This show is destined to be a special one.

Last week’s guest was Dr. Peter Dale Scott, author of The Road to 9/11 and many other titles. Listen to this amazing discussion here–Click Here (MP3 21MB, Right Mouse Click And “Save File As”)