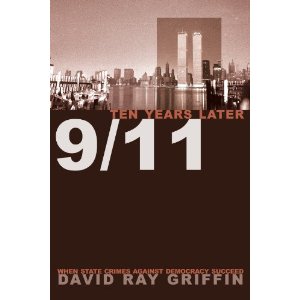 In any case, for reasons discussed in this book (especially the final two chapters), there is nothing surprising about the fact that the 9/11 crime has not been revealed. Those who have gained control of a state in an ostensible democracy have many means not only for orchestrating major crimes, but also for preventing those crimes (including their crimes against democracy itself) from being publicized.

This tenth anniversary marks a milestone in my own work: The present book is my tenth book about 9/11. I have been pleased to see, as indicated by sales, that my books on this topic have continued to seem helpful — including my oldest book, The New Pearl Harbor.1

Unfortunately, “ten years later” also applies to the war in Afghanistan, which began on October 7, 2001. The first chapter of this book deals with the still widely-held belief that this war was justified by 9/11. For people new to the issues, this chapter can serve as a summary of the evidence against the view that Osama bin Laden in particular, or al-Qaeda in general, was responsible for the 9/11 attacks. The tenth anniversary of the 9/11 attacks is also the tenth anniversary of the new onslaught of the (Christian and Jewish) West against the Muslim world — an onslaught that now includes not only the US-NATO attacks on Afghanistan, Iraq, and Libya, but also support for Israel’s 2006 war on Lebanon/Hezbollah and its continued oppression of Palestine, along with US foreplay in Iran, Yemen, and Syria. How can anyone think that 9/11 is ancient history, which no longer matters?

Editor’s Note:
Updated 9/4: Although Dr. Griffin had hoped that his new book would be available for the 10th anniversary of 9/11, printing was initially delayed (thus the original “delayed” message here. However, he has just learned from his publisher (Interlink Books) that printing is finished, and many people should now be able to receive copies before September 11th, after all.
Dr. Griffin has provided to 911Truth.org the book’s table of contents and its introduction, which follow.

For most people, “9/11” is virtually synonymous with the title of this book’s second chapter: “The Destruction of the World Trade Center.” However, rather than simply rehearsing the arguments against the official view — according to which these buildings were brought down by the airplane strikes and the resulting fires — this chapter asks: “Why Have Otherwise Rational Journalists Endorsed Miracles?” — with “miracles” understood to be events that violate well-established laws of science. Dealing with a number of left-leaning journalists, I ask why these people, who in other contexts would ridicule miracles, have endorsed them in relation to the destruction of the World Trade Center. They do not, to be sure, speak in terms of miracles. But they affirm events that require violations of fundamental scientific principles.

In the following chapter, I deal with this question in relation to two of our best and deservedly respected journalists in particular, Bill Moyers and Robert Parry. (Although Parry is not nearly as well known as Moyers, who long hosted what many considered the best hour on television every week, Parry is equally well respected by people who know his writings.) I ask: Why do Moyers and Parry endorse the official 9/11 story about the World Trade Center, even though one cannot endorse this story without implying a belief in miracles? I suggest that their endorsement can only be understood in terms of the psychological dynamics of the “Big Lie.”

In the fourth chapter, I focus on Building 7 of the World Trade Center, taking the name of this chapter from a New York City judge who, while getting ready to rule on a petition to allow the people of the city to vote on whether they want their own investigation of 9/11, asked in response to a statement about Building 7: “Building what?” Given the fact that this building was so big, and that the demolition of it was so obvious, I discuss “How State Crimes Against Democracy Can Be Hidden in Plain Sight.” I thereby introduce the language of “state crimes against democracy,” abbreviated SCADs, which was in 2010 brought into the discussion of 9/11 by means of a symposium in a leading social science journal (this being another example of the continued expansion of the 9/11 Truth Movement). As this language indicates, 9/11 was not simply a crime against the people of the United States and the world, especially the people who were murdered on 9/11 or who had loved ones who were murdered. It was also a crime against democracy itself.

Chapter 5 turns to the chief method through which the perpetrators convinced the American people that the attacks had been orchestrated by Muslims: the apparent phone calls from the 9/11 planes, through which Americans were first told that Middle Eastern men had hijacked four airliners. This information was provided by a leading member of the Bush-Cheney administration, the Department of Justice’s solicitor general, Theodore “Ted” Olson, who told CNN and hence the world that his wife, well-known CNN correspondent Barbara Olson, informed him that her plane, American Airlines 77, had been hijacked by men armed with knives and box-cutters. In 2006, it became public knowledge (by means of the FBI’s evidence provided for the trial for Zacarias Moussaoui) that Ted Olson’s report — that his wife had talked to him twice from AA 77 — was not true. This could hardly have been more important, given the fact that the alleged phone calls had provided the evidence that the planes had been hijacked, combined with the fact that the first and most important conveyor of this reported evidence was Ted Olson. And yet the American media, which have the responsibility of reporting the information the American public needs to function as a democracy,2 have never reported the FBI’s acknowledgment that the Olson calls never happened. This chapter also treats other evidence that the “phone calls from the planes” never happened.

In Chapter 6, we begin a transition to the official story about the attack on the Pentagon. This chapter is based on an essay that was written the week that Tim Russert, the well-known moderator of “Meet the Press,” suddenly died. Titled “Tim Russert, Dick Cheney, and 9/11,” this article pointed out that Cheney, in a discussion with Russert on his program only a few days after 9/11, had revealed something about his actions on 9/11 that contradicted what the 9/11 Commission later claimed — something that strongly suggested that Cheney had given “stand-down” orders prior to the Pentagon attack. I wrote this chapter because I thought that, given the respect and grief for Russert in the news media, there was a chance — not much of one, but more than usual — that someone in the mainstream media might pick up this story. But there was no breach of the general policy: Stories that challenge any important part of the official account of 9/11 are not to be covered. Nevertheless, I turned that essay into a chapter for the present work, both for its intrinsic interest and for its importance for the following chapter.

The title of that following chapter — “A Consensus Approach to the Pentagon” — alludes to the widespread sense, both in and outside the 9/11 Truth Community, that, whereas there is a lot of consensus within this community about the destruction of the World Trade Center, there is no such consensus about the attack on the Pentagon. In this chapter, I argue that, although there is indeed much disagreement on the issue that has received the most debate — Was the Pentagon hit by a Boeing 757? — this is a relatively trivial point in comparison with an issue about the Pentagon attack on which the 9/11 Truth Movement has reached consensus.

The title of Chapter 8 employs an expression that may to most readers seem strange: “Nationalist Faith.” We normally think of the primary form of faith in the United States as Christian faith. But I suggest, in agreement with theologian John Cobb, that the primary form of faith in America is the American version of nationalism, which could be called “Americanism.” To illustrate how this nationalist faith can trump Christian faith, I explain how the one book I wrote on 9/11 from an explicitly Christian point of view, Christian Faith and the Truth behind 9/11,3 led to the removal of Westminster Press’s president and vice-president, who had given the go-ahead for the publication of my book. As I explain, people in the church who complained about my book, including members of the board who censured my book, did not raise any theological objections. What was objectionable was that I had provided evidence that the 9/11 attacks, rather than having been carried out by foreign Muslims, were orchestrated by members of the U.S. government.

The final chapter expounds the idea expressed in the book’s subtitle: “When State Crimes Against Democracy Succeed.” Having introduced the notion of SCADs in the fourth chapter, I deal in this final chapter with the dangers to our country and, indeed, to the whole world, when American SCADs succeed and are not quickly reversed. When President Kennedy and then Bobby Kennedy were assassinated, wise commentators at the time warned that, if the truth about these murders were not revealed, then more, perhaps greater, state-sponsored crimes would be committed. That prediction came true on 9/11.

Ten years have elapsed since 9/11, and this greatest of all SCADs has not been reversed. So anyone who cares about the future of this country, and of the world as a whole, should be working to expose the state crime against democracy that occurred on 9/11.

1My previous nine books were: The New Pearl Harbor: Disturbing Questions about the Bush Administration and 9/11 (2004); The 9/11 Commission Report: Omissions and Distortions (2005); Christian Faith and the Truth behind 9/11: A Call to Reflection and Action (2006); 9/11 and American Empire: Intellectuals Speak Out, co-edited with Peter Dale Scott (2006); Debunking 9/11 Debunking: An Answer to Popular Mechanics and Other Defenders of the Official Conspiracy Theory (2007); 9/11 Contradictions: An Open Letter to Congress and the Press (2008); The New Pearl Harbor Revisited: 9/11, the Cover-Up, and the Exposé (2008); The Mysterious Collapse of World Trade Center: Why the Final Official 9/11 Report is Unscientific and False (2009); Cognitive Infiltration: An Obama Appointee’s Plan to Undermine the 9/11 Conspiracy Theory (2010).

I did not include in this list The American Empire and the Commonwealth of God: A Political, Economic, Religious Statement, co-authored with John B. Cobb Jr., Richard Falk, and Catherine Keller (2006), because it had only a few pages about 9/11. And I did not include Osama bin Laden: Dead or Alive? (2008), because there is no evidence — even the FBI agrees — that Osama bid Laden had anything to do with 9/11.

2The International Federation of Journalists has defined freedom of the press: “that freedom from restraint which is essential to enable journalists, editors, publishers and broadcasters to advance the public interest by publishing, broadcasting or circulating facts and opinions without which a democratic electorate cannot make responsible judgments”; contained in “Status of Journalists and Journalism Ethics: IFJ Principles,” May 2003 (http://www.ifj.org/en/articles/status-of-journalists-and-journalism-ethics-ifj-principles). It matters little whether the “restraint” is political (as in the former Soviet Union) or financial.

3David Ray Griffin, Christian Faith and the Truth behind 9/11: A Call to Reflection and Action (Louisville: Westminster John Knox, 2006).