Film & debate in the European Parliamant about 9/11.

Brussels 26 February 2008 7pm, PHS 3C50 (this is where the debate will be held) — this event is NOT open to the public, only to journalists and the politicians. (Nevertheless, Belgian & French Truthers have their contacts and will make sure this debate is videotaped and put online afterwards). 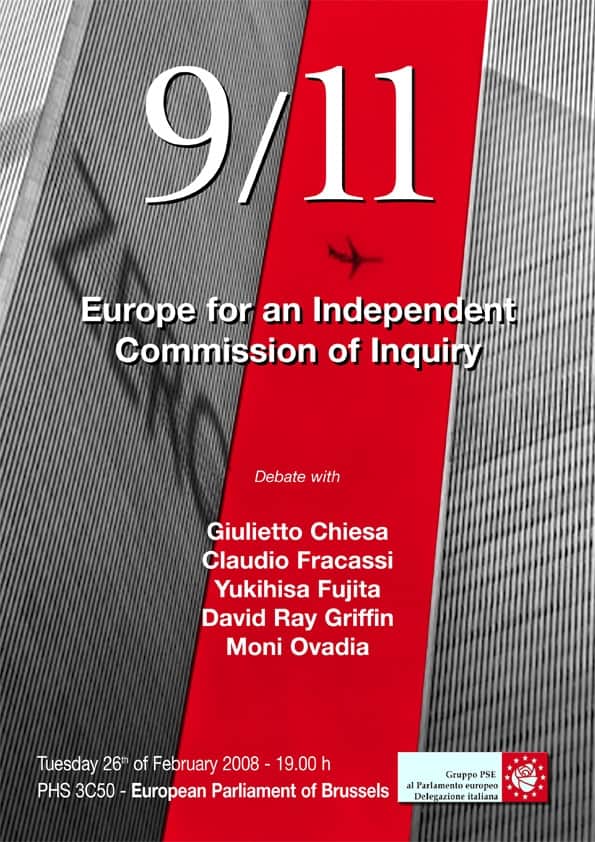 A few weeks after the Japanese parliament it is now Europe’s turn to open the debate on what really happened on 9/11. While journalists and politicians still support the official version of the events, defended by the Bush administration — in which the blame is laid on Muslims — the Europarliamentarian from Italy, Giulietto Chiesa, organizes an historical evening in the European Parliament in Brussels on Tuesday 26th February. He will present his film ZERO — 9/11: Europe for an Independent Commission of Inquiry.

This documentary is the result of 8 months of intensive research and interviews in Europe and the United States. It emphasizes the inconsistencies, manipulations, lies and omissions of the official inquiry. The film will be followed by a debate with Giulietto Chiesa himself (journalist and politician in Italy, member of the European Commission of Inquiry on the illegal prisons in Europe), Andreas von Bulow (Former Minister from Germany and specialist of the secret services), Prof. David Ray Griffin (Author of several 9/11 books) and Yukihisa Fujita (Japanese parliamentarian).

This initiative was prompted by the international Truth Movement, started by families of victims who clamor for a new and independent inquiry into the events of 9/11.

Ed. Note: Special thanks to Mark Dermul of 911belgium.be for English translation.