Vic Sadot’s latest CD, 9/11 Truth & Justice Songs is now available. Last year Vic traveled from his home in Delaware to Berkeley, and has been singing at peace and justice festivals, participating in TruthAction events with San Francisco truth advocates, and sang Cheney’s in the Bunker last year at a rally for Green Party Presidential candidate, Cynthia McKinney.

Have a listen to a sample of Vic’s work at Last FM and you’ll want a copy of this CD — Please support this talented, dedicated truth musician.

Well, the day was nine-eleven in the year two thousand-one 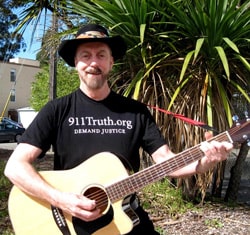 That’s the day the “war on terror” was officially begun
When 2 planes took down 3 buildings in a scene of “Shock & Awe”
Before they hauled away the rubble, it was a crime scene for the law!

1 The Ballad of William Rodriguez – The story the World Trade Center janitor of 20 years who suddenly became a Ground Zero rescue hero as he responded with courage on September 11, 2001. The song is based on an interview by Vic Sadot in 2005 with William Rodriguez. Like many other eye-witnesses, William told of a series of explosions inside the towers on 9/11/01. His testimony was omitted from the official 9/11Commission Report on Terrorist Attacks. He has since become a 9/11 Truth Activist. (5:18)

2 Cheney’s in the Bunker/Do the Orders Still Stand – Page 220 of The 9/11Commission Report: Omissions & Distortions by David Ray Griffin reveals the omitted testimony of Secretary of Transportation Norman Mineta of the morning of 9/11/01 that puts Cheney in charge in the White House bunker conducting war game drills that go live as early as 9:20 am. The Commission has Cheney arriving at 9:58 and does not mention any war drills going on simultaneously. (4:50)

3 Mad Cowboy Disease – Folk meets punk with a Zydeco 8 step dance beat. The result is a hilarious broadside aimed at G W Bush war policies backed by the use of a phony cowboy image. The song offers a bizarre rationale for Neo Con bellicosity: “It must have been the dinner at the Inauguration Ball. There must have been some Mad Cow on the menu after all.” (4:29)

4 The Ballad of Pat Tillman – The story of the famous football star who believed the official 9/11 story told by George Bush the day after the attacks. Tillman joined the Army Rangers. He served in Iraq and then in Afghanistan. He was reading and corresponding with anti-war professor Noam Chomsky, and, according to his mother Mary, Pat Tillman said that the war was “illegal”. The Pentagon lied to his parents, the media, and the American public when they said he died a heroic death in battle. Later, as the parents and reporters investigated, the Pentagon said that Tillman was killed by “friendly fire”. They made up this phony story so that they could continue to use Pat Tillman as a recruitment poster boy. On July 26, 2007 the AP released story titled “Was Tillman Murdered?”. It reported that the coroner report stated that Pat Tillman was shot by 3 bullets to the forehead at 10 yards range. (5:17)

5 Born To Win – This song about US military interventions in “Third World” countries in the name of “democracy” for the so-called “Free World” was originally written in reaction to the “Iran-Contra Scandal” of the Reagan regime in which covert drugs and arms were illegally moved. The 1985 release rings true to today’s US wars of choice. (3:56)

6 Trouble in the Rubble – Inspired by an Associated Press article by Amy Westfeldt about the 9/11 rescue dogs having their feet burned by a strange “white-hot debris”. It was run in the Washington Post on Oct 20, 2006. While it is consistent with many reports of pools of molten steel in the rubble, it is not consistent with the official story that the towers fell into rubble as a result of jet fuel fires. (5:10)

7 Blowback or Bloody Treason – Explaining 9/11 as “blowback” against aggressive US policies was the initial view of many, especially on the left, which did not challenge the “official conspiracy story” of the G W Bush administration or the subsequent 9/11 Commission report of 2004. This song was written after reading Crossing the Rubicon by former Los Angeles detective Michael Ruppert on the forensic evidence and verifiable facts relating the events of 9/11/01. (6:06)

8 Are You A Citizen Or Are You A Slave – Written by Vic Sadot & Cindy Abramowicz Hubschmitt. The song challenges citizen apathy and the notion that we cannot change anything by citing the historical record of struggle that says otherwise. Colonialism, slavery, debtor prisons have been defeated and a Bill of Rights, the right to organize unions, civil rights and voting rights were all won through struggle. It’s a strident anthem done in Cajun waltz style. (5:01)

9 Nightmare of New Orleans – A Cajun blues song about the criminally negligent response to Hurricane Katrina before, during, and after that catastrophe. (3:05)

10 The Kidnapping Coup – Tells the story of the US Bush-Cheney regime’s overthrow of the democratically elected government of Jean-Bertrand Aristide on February 29, 2004. (7:08)

12 Ride the Wind – Vic Sadot’s song about state terror and weapons of mass destruction. The title cut of a 1988 LP takes on new meanings in the post-9/11 era. Before it was about the balance of terror supplied by mutual assured destruction (MAD) in the nuclear arms race. Now it brings to mind the great fear and war mongering done in the wake of false-flag state terror operations by the globalizing corporate empire. “Ride the wind! Stand the storm! There ain’t no place to hide!” (5:36)