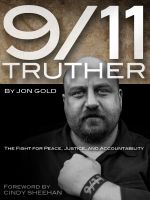 This wonderful new book by Jon Gold, with foreword by Cindy Sheehan, is now available in digital format from either Amazon or Smashwords, so you can choose the format that works best for you.

“9/11 Truther” is the story about an everyday American who saw that something was wrong with what we were told about 9/11, and tried to do something about it.

“This book is part autobiography and part chronicle of the 9/11 Truth Movement over the last ten years, from Jon’s perspective as a participant. His telling of this story is supported with examples of his writing, as well as communications he’s received from people over the years, both positive and negative. … The book is informative and enlightening, and nakedly, emotionally honest. A unique and valuable contribution.” Erik Larson

“Essential reading for those who have ever dismissed anyone as crazy for questioning what we were told about 911. Jon Gold is no conspiracy theorist, just an ordinary decent American who has questions.” Neil Deaken

“Jon Gold’s story is interesting in at least two respects: first, next to Paul Thompson, he has compiled more information about 9/11 over the past 10+ years than anyone I know, and has synthesized the results in a fair-minded way to illustrate the many demonstrable ambiguities and lies of the official 9/11 narrative; and second, he has articulated what it is to be involved in a social movement that exists on the fringe and that contains its share of fringe characters, though Gold himself is not one.” wheressuzanne