Rally For The Truth in Boulder

The Northern California 9/11 Truth Alliance has announced winners of
their "9/11
Truth for Peace and Justice" Art Contest. The art is helping them
to organize a rally, march, and September 11th Truth events, including 9/11 Film
Festivals in San Francisco and Oakland.

The
$500 Grand Prize Winning Entry by an anonymous artist is entitled, "The
Great Deception 9/11-2001." It depicts the Twin Towers, their faces
reflecting Cheney, the whisper in Bush’s ear, Mohammed Atta, Bin Laden, the
official 9/11 Report, a fuming Rumsfeld, the collapse of WTC Building Seven, and
Pakistan’s I.S.I. general (who breakfasted with Porter Goss and Bob Graham at
the time of the attack and was later identified as the man who had $100,000
wired to Atta). Included is a quote from the Project for a New American Century:

"The process of transformation is likely to be a long
one, absent some catastrophic and catalyzing event like a new Pearl
Harbor."

All the winners are listed and their art displayed at www.sf911truth.org

Northern California 9/11 Truth Alliance will hold the fourth
annual "9/11 Truth" rally and march from the Panhandle,
(between Oak and Fell @ Ashbury) up Ashbury, down Haight, across Golden Gate
Park (about 2 miles). The marchers will end up at the 7th Annual Power to the
Peaceful Concert, featuring Michael Franti and Spearhead. The popular concert
and social justice festival drew 50,000 people last year and is free to the
public.

In San Francisco, on the second floor of the Veteran’s War Memorial Building,
401 Van Ness Avenue, "9/11
Truth for Peace and Justice – Films, Discussion, Dialogue and Reflection"
will take place in multiple rooms. There will be music, a display of art from
the Art Contest, and presentations, as well as discussions, dialogues, film
screenings. The event is free to the public. Co-sponsored by Veteran’s for
Peace- Chapter 69, American Legion Post 315, and endorsed by United for
Peace-Bay Area, Marin Coalition for Peace and Justice, Central Committee for
Conscientious Objectors.

The Northern California 9/11 Truth Alliance has been at the forefront of the
national 9/11 Truth Movement; they maintain an information hotline at
866-268-2320. Additional 9/11 Truth rallies, marches and events are scheduled
for Colorado, New York, the UK, and Toronto.

Note: The next two Bay Area events are on Aug. 26 (Activism & the
9/11 Truth movement) and Aug. 31 (Ralph Schoenman on the London Bombings). See www.communitycurrency.org/events.html 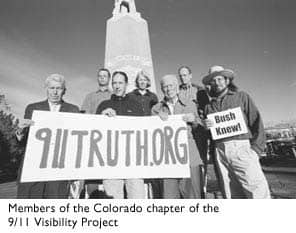 Colorado 9/11
Visibility will be holding a Rally For The Truth on Sunday, September
11th, 2005, 1:00-4:00 p.m. in Boulder, Colorado, across from the Boulder County
Courthouse (between 13th and 14th streets and on the south side of Spruce facing
the Pearl Street Mall). This is without a doubt, the most important day of the
year for those of us seeking the truth about 9/11 and we’re taking it to the
streets! Please join us in attendance to honor those killed on that day and to
demand a real investigation into the crimes of 9/11.

As a result of alliances forged at the D.C.
Truth Convergence in July, Chris Emery will be coming in
from OKC to attend and speak at our rally. Chris Emery is a documentary film
producer and member of the Oklahoma
City Bombing Investigation Committee.

The OKCBIC has worked tirelessly for the past 10 years, trying to expose the
crimes and cover-up of the horrible bombing on April 19, 1995 in OKC. The
similarities between OKC and 9/11 are eerie. We urge everyone in Colorado and
neighboring states to come out and meet these modern day American heroes, and to
learn about their struggle for the truth.

presented by Toronto’s own boilingfrog

‘Because the events of September 11, 2001 have since shaped geo-politics, and
that Canadians are continually told it is not a matter of if, but when, a
terrorist strike happens here, we feel it imperative to take a critical and
thorough look back at the defining moment of the 21st Century,’ says
Kelly Reinhardt of boilingfrog.ca.

‘Sen. Colin Kenny, the chair of the Senate Committee on National Security and
Defence, has warned about terrorist threats in Canada for years. "It’s not
if it is going to happen. It’s when it is going to happen," he says, adding
that Canada should treat the London bombings as a wake-up call.’ (CTV.ca
News Staff)

The specter of new terror events frightens many, but even more frightening
is the overwhelming amount of evidence pointing towards US Government complicity
in the largest terrorist attack in history.

But this is nothing new.

Viewers will learn during this film festival that governments, past and
present, have used bogus ‘pretext incidents’ to draw their nation into war, and
curtail civil liberties.

The 9/11 Film Festival will feature the best of independently produced videos
on the subject:

‘The Great Deception: The War on Terrorism, An Alternative View’

‘The War for Oil and Drug Money’

‘Behind Every Bush There is a Terrorist’

‘The Great Conspiracy: The 9/11 News Special You Never Saw’

Toronto audiences will have the first opportunity to publicly view
presentations from last years International Citizens’ Inquiry Into 9/11, Phase
2, Toronto, May 2004. Citizens who make up Skeptics’ Inquiry For Truth (SIFT),
who organized that event, also commissioned a poll at that time titled
"Attitudes towards September 11th Study"

Full schedule and line up with links to filmmakers, reviews, distributors,
available at www.boilingfrogsblog.blogspot.com

‘The Magazine of the 9/11 Truth Movement’

Barrie Zwicker, Writer and Producer, introduces his film, and discusses with
audience afterwards.

See "The Great Conspiracy" & a portion of the amazing
prime-time Japanese news hour that demolished the official story of 9/11. 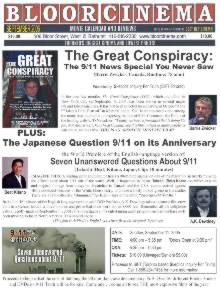