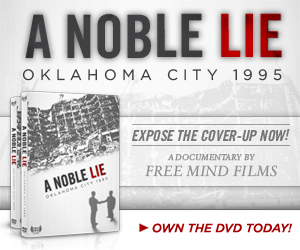 Noble Lie: A myth or untruth knowingly told by the elite to maintain social harmony, or the social position of the elite. – The Republic, Plato

The 1995 bombing in Oklahoma City was a direct blow to the heart of America. One hundred sixty-eight people were killed, including nineteen children. For those watching the nightly news, terrorism had come home. For years following the bombing, countless victims’ family members, survivors, rescuers and ordinary Americans have questioned the official accounts about that fateful day.

Hoping to shed light on answers long ignored and censored, both by prominent media outlets and the U.S. government, A Noble Lie peels back what we thought we knew about the bombing and its perpetrators. This film exposes information never before examined or brought to the attention of the American public.

A Noble Lie is the culmination of years of research and documentation conducted by independent journalists, scholars and ordinary citizens. Often risking their personal safety and sanity, they have gathered evidence which threatens to expose the startling reality of what exactly occurred at 9:02 am on April 19, 1995 in Oklahoma City.

Utilizing footage and eyewitness testimony, previously unseen,
A Noble Lie will change forever the way you look at the true nature of terrorism.