A Few Highlights and Major Achievements

We serve the public and the September 11th truth and justice movement by providing the leading Web portal to 9/11 research. 911Truth.org stands as one of the best publications in its own right, coupling mass appeal with vetted research that aims for the jugular, upholding the highest standards of fact and logic; an archive of the best reporting, analysis, A/V material and teaching resources on the topic. A few of our many sister and spin-off sites include the “Justice for 9/11” complaint, “The 9/11 Reading Room” archive [no longer on line], the “9/11 Visibility Project”, and websites of the many 911truth.org-affiliated grassroots groups around the world.

911Truth.org, its staff and board members look back on a long and proud record of co-organizing research and strategy conferences to expose the 9/11 cover-up. Several of these have been held in New York City, with other major gatherings in San Francisco and Toronto (2004), Berlin (2003), and the “Emergency Truth Convergence” (2005) in Washington DC, as well as many other events on a smaller scale. The conferences have acted as the nerve center of a growing 9/11 truth movement. They have also resulted in hundreds of hours of self-produced educational media, reaching millions of people with the facts of 9/11 through the Web, DVD and public-access TV broadcasts. We do not merely try to affect corporate media coverage of the issues; increasingly we are becoming the media. The legacy continued in Chicago in 2006 with Revealing the Truth – Reclaiming Our Future, an international gathering that became a tipping point for the exponential growth of the 9/11 truth movement.

In January 2008 in Santa Cruz, CA, our first national conference of 2008 was a phenomenal success! 300 participants gathered to brainstorm and strategize on how to build a new media network, resulting in amazing ideas and plans. Details and info has been posted, and is being updated by working groups at Truthemergency.us. Implementation of these ideas will take a concerted, long-term effort, and we are excited to be working with such broad-based activists in this critical area. You will begin seeing more ‘New Media’ articles posted at the site as the year progresses. An alternative newsire, which can replace all corporate media as a daily source for news, has been created as an outcome of this conference: mediafreedom.pnn.com/5174-independent-news-sources

41 percent of New York State residents agree with the belief that US government leaders knew about 9/11 in advance and consciously allowed it to happen, according to an August 2004 telephone survey of 800 adults. Commissioned by 911Truth.org, the survey also found that two-thirds of New York City residents support a new independent investigation into the crimes of September 11th. Thanks to the Zogby poll, 911Truth.org was able to show that the numbers of people harboring well-justified doubts about the Official Story are growing, and that 9/11 truth is a mainstream position. In a follow-up, we conducted the WBAI-FM/911Truth.org New York Lawmaker Survey of city, state and federal legislators representing constituencies in New York City. We aim to marshal support among members of the New York state assembly and senate, city council, and US congress for a new criminal investigation of September 11th, whether by the New York Attorney General, the Congress or a new, truly independent, non-governmental and non-corporate body. In May, 2006, 911Truth.org commission Zogby International to conduct another poll, this time national in scope. Results of that poll, which found that over 70 million voting age Americans distrust the official 9/11 story and support a new investigation of possible US government role in the attacks. Details are in our press release. Briefly, poll results indicated 42% believe there has indeed been a cover up (with 10% unsure) and 45% think “Congress or an International Tribunal should re-investigate the attacks, including whether any US government officials consciously allowed or helped facilitate their success” (with 8% unsure). 911Truth.org commissioned another national poll for Summer 2007. Zogby/911Truth.org 2007 poll results were released September 6, 2007. Read the press release here. Our thanks to a few very generous donors for making this expensive process possible. Total cost for the poll was just over $6,000. Unfortunately, in spite of our best efforts, an official press release from Zogby, posting at their front page, and PRWeb release, the media has entirely blacked out this important information. The results: 51% of Americans support a new investigation, are very important to use in speaking with your elected officials. Post the results to your websites, include a link in your email signatures, deliver them to your legislators, newspapers, clergy, and friends. We are not a “fringe minority” to be dismissed. We are a significant cross-section of mainstream America, and we demand to be heard!!

The Spitzer Complaint: Justice for 9/11

In 2004 the staff and board members of 911Truth.org researched, wrote and presented a complaint to New York State Attorney General Eliot Spitzer, petitioning him to immediately convene a grand jury on the still-unsolved crimes of September 11th, 2001. Advised by Attorney Carolyn Betts, we published this thorough, well-grounded legal pleading at www.Justicefor911.org , in a partnership with 911CitizensWatch and the World Trade Center Environmental Organization. Unlike other states, New York allows no formal process for filings with the Attorney General. Given that Spitzer was unwilling to even talk about a new investigation, and has now become Governor of New York, “Justice for 9/11” is as much a public campaign as a legal one. The Petition of Solidarity in support of the complaint currently stands at 15,000 confirmed signatories. The action shall now extend to filings with attorney generals in other states, in the hope of sparking a cooperative approach based on the model of the tobacco and Microsoft cases. We shall pursue this effort until an Attorney General does his duty by the citizens of New York, or until other prosecutors show the courage and conviction that truth, justice and the security of the people demand.

Launched to accompany the Spitzer Complaint, the Statement was signed by more than 100 luminaries from many fields, representing all political persuasions; among them are scientists, artists, writers, musicians, former government officials, a Congresswoman, and all three of the 2004 major third-party presidential candidates. The Statement was also signed by fifty members of September 11th families. 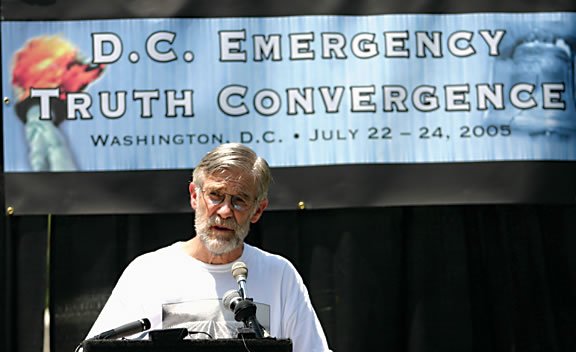 A three-day conference in Washington DC (July 22-24, 2005) was timed to coincide with the one-year anniversary of The 9/11 Commission Report release. Georgia Rep. Cynthia McKinney also took the one-year anniversary as the occasion to hold hearings on Capitol Hill on July 22. These were broadcast on C-SPAN and took testimony from Paul Thompson, Nafeez Ahmed, Michael Ruppert, John Judge, Peter Dale Scott et al., most of whom also participated as speakers in the subsequent Emergency Truth Convergence organized by 911Truth.org. The “ETC” opened with a National Press Club briefing by

Peter Phillips of Project Censored, New Pearl Harbor author David Ray Griffin, and documentary film-maker Danny Schechter. The “Defeat Lethal Deceit” rally at Lafayette Park on Saturday brought 9/11 truth to the public spaces of Washington for the first time. A C-SPAN “Book TV” taping focused on Nafeez Ahmed’s The War on Freedom. A national “Beyond Downing Street” Town Hall meeting and 18 education and strategy sessions focused on unity among a few of the major “truth disclosure” campaigns, focusing not only on 9/11 but the US government’s lies to justify the illegal invasion of Iraq; the Oklahoma City bombing of 1995; the stolen elections of 2000 and 2004; the poisoning of the world through the use of depleted uranium munitions; veterans’ needs; corporate media control; and the continuing cover-up of the June 8, 1967 attack on the USS Liberty. 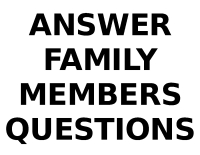 Beginning in 2003, members of 911Truth.org and then-allied 911CitizensWatch attended & monitored all of the public hearings of the government’s 9/11 Commission, until the publication of The 9/11 Commission Report . They lobbied the Commission to take testimony under oath, until it finally began swearing-in all public witnesses. They directed a campaign to assure that Condoleeza Rice’s testimony was heard under oath and in public. Their hard-hitting press conferences on the concerns of the September 11th families were often broadcast on C-SPAN, and provided public support to whistleblowers like Sibel Edmonds and April Gallop. 911Truth.org co-published the Official 9/11 Cover-up Guide, Parts I & II.  These brochures were distributed to the public, 9/11 Commissioners, family members and the press during the last two Commission hearings in May and June 2004 (and are still available online.) They kept track of the proceedings, providing in-depth reporting from the Commission beat, sometimes as the only source on major stories (such as the Max Cleland resignation). Finally, when the 9/11 Commission concluded what turned out to be a two-year-long whitewash, they exposed its omissions, distortions, failings and staggering conflicts of interest.

Grassroots Contacts Support
The list of Grassroots Contacts grew during 2007 and 2008 by approximately 100 organizers in cities and towns across America, Europe, Australia, and South America, and we were able to make more resources available to them. We held monthly national conference calls, and provided daily support via email and phone to these great organizers.

• attended the national meeting of World Can’t Wait in November 2008 in Chicago, which was extremely valuable

• participated with 27 other national/regional organizations at the NYC Emergency Impeachment Summit held in February, at which the Impeach07.org Coalition formed.

• traveled to Atlanta in August 2007 for the amazing, first-ever United States Social Forum, where we joined with some 15,000 other people to march through historic downtown Atlanta, caucus, and talk with hundreds of other groups and leadership, distributed thousands of fliers and DVDs, hosted four tables with other 9/11 truthers, presented a well-attended two-hour workshop on 9/11 and social justice. We prepared and introduced a referendum calling for an independent, international investigation into 9/11, which was overwhelmingly passed by the full assembly at the final gathering of attendees.

• coordinated an August gathering of coalition groups in NYC, which included representatives of several of the NYC 9/11 truth groups and non-9/11-specific organizations, and participated in a similar gathering in Philadelphia in July.

• assisted and supported local groups across the nation in working together with other local/regional activist groups to introduce and promote 9/11 truth information and joint actions and campaigns.

• attended and presented a 9/11 truth informational proposal (rejected) to the United for Peace & Justice national meeting in 2006.

911truth.org Working Groups Initiative
We attempted to create specific-focus Working Groups during 2007-8, and brought together interested people in many of these areas at different periods during the year:

Legal–Research, Representation, Networking – We would like to improve our effectiveness in pursuing legal redress by developing ongoing relationships with people in the legal field.

Research & Investigative Journalism / 9/11 Newswire – We emphasize investigative research pieces focusing on specific aspects of the 9/11 crimes and consequences, and analytical articles to help readers make sense of the information.

Campus Outreach – We found that college groups come and go… Conference calls among campus groups were being held regularly, until students changed schools or graduated!

Resource Development – Facilitated the creation, coordination and distribution of educational materials in all media.

International Outreach and Networking – International groups grew by leaps and bounds in 2007, and 911truth.org helped people connect with our Grassroots contacts at home and around the world.

See Getting the Message Out: 911 truth