Ever since the founding of 911Truth.org and its precursor, “The 9/11 Truth Alliance” at the same Web site, the group’s board has initiated or played key roles in the following actions and events to gain exposure for 9/11 Truth: 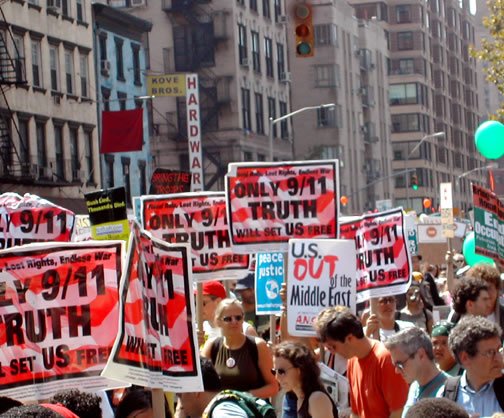 In cities across the US, 911Truth.org has distributed thousands of signs announcing the presence of 9/11 truth blocks at major antiwar rallies. Signs reading “Stop the 9/11 Cover-up” have appeared on the front pages of Newsday, the Los Angeles Times and many other publications. 911Truth.org provided full support to the largest street protests devoted exclusively to September 11th truth demands. On September 11th 2005 in New York City, hundreds of people marched from The New York Times building to the United Nations to “End the 9/11 Media Blackout” and demand an international truth commission. Massive protests at Ground Zero on September 11th, 2006 went down in history as “The Day the Lie Died,” with over 2,000 participants.

“Globalize 9/11 Truth” (October, 2004): Campaign delivered 9/11 info flyers to all permanent UN missions and got thousands worldwide to contact them and urge pursuit of 9/11 truth.

A series of breakthrough events, that began with a week full of protests and teach-ins during the Republican National Convention and culminated with the 9/11 Citizens’ Commission (“The Omissions Hearings”) on Sept. 9 and the massive “Confronting the Evidence” show on Sept. 11 (the latter co-organized with Walden Three). These drew thousands of participants and led to a massive expansion of activist involvement in the most crucial of all locations for the movement.

DNC “Expose the 9/11 Cover-Up” (July 2004, Boston): Workshops and teach-ins, thousands of signs and flyers given to activists who gathered for the Democratic Party convention.

“Dude, There’s More to the Story” (June 2004): Mass national leafleting of Michael Moore’s “Fahrenheit 9/11” on its debut at theaters across the US and Canada, urging viewers to learn about the issues that Moore’s film did not approach and to get involved with 911Truth.org.

“Antiwar 9/11 Eureka” (June 2004): Mass mailing to 400 of the most active peace & justice groups, arguing that waking people up to 9/11 lies can help turn millions more against the war. (The packages contained David Ray Griffin’s book, The New Pearl Harbor , our Official 9/11 Cover-up Guide , Part I, and endorsement letters from peace and justice leaders.) 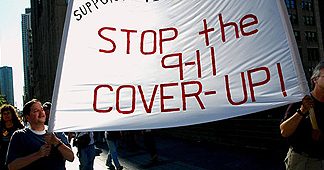 Ongoing: Series of lectures and films at St. Mark’s Church in Manhattan, as covered in New York magazine and The Village Voice . 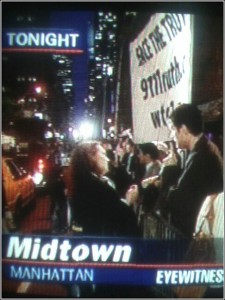 The Vigil for Truth at Ground Zero has taken the case directly to the public at the former World Trade Center site, almost every Saturday since January 2004.

“Unanswered Questions-Demanding Answers” (Berlin International 9/11 Summit, Sept. 7, 2003): More than 800 people including reporters from the entirety of the German mass media turned out to hear Nafeez Ahmed, Cynthia McKinney, Michael Ruppert and Daniel Hopsicker, German author Mathias Broeckers, the Italian magistrate Guido Salvini (who successfully prosecuted the true perpetrators of false-flag attacks in Italy in the 1980s) and many other European experts.