The paper ends with this sentence: “Based on these observations, we conclude that the red layer of the red/gray chips we have discovered in the WTC dust is active, unreacted thermitic material, incorporating nanotechnology, and is a highly energetic pyrotechnic or explosive material.”

In short, the paper explodes the official story that “no evidence” exists for explosive/pyrotechnic materials in the WTC buildings.

What is high-tech explosive/pyrotechnic material in large quantities doing in the WTC dust? Who made tons of this stuff and why? Why have government investigators refused to look for explosive residues in the WTC aftermath?

These are central questions raised by this scientific study.

The peer-review on this paper was grueling, with pages of comments by referees. The tough questions the reviewers raised led to months of further experiments. These studies added much to the paper, including observation and photographs of iron-aluminum rich spheres produced as the material is ignited in a Differential Scanning Calorimeter (see Figures 20, 25 and 26).

The nine authors undertook an in-depth study of unusual red-gray chips found in the dust generated during the destruction of the World Trade Center on 9/11/2001. The article states: “The iron oxide and aluminum are intimately mixed in the red material. When ignited in a DSC device the chips exhibit large but narrow exotherms occurring at approximately 430 degreesC, far below the normal ignition temperature for conventional thermite. Numerous iron-rich spheres are clearly observed in the residue following the ignition of these peculiar red/gray chips. The red portion of these chips is found to be an unreacted thermitic material and highly energetic.” The images and data plots deserve careful attention.

Editor’s Note:
Please Digg and Reddit and post on other community sites. Steve Jones has been commenting further at 911blogger.com and asking for scientifically-based comments to be added there. If you are not already registered user at 911blogger.com, contact the site editor here.In addition, Jones and Ryan have been interviewed by Michael Wolsey at Visibility911.com — links follow.

Some observations about the production of this paper:
1. First author is Professor Niels Harrit of Copenhagen University in Denmark, an Associate Professor of Chemistry. He is an expert in nano-chemistry; current research activities and his photo can be found here:
http://cmm.nbi.ku.dk/
Molecular Structures on Short and Ultra Short Timescales
A Centre under the Danish National Research Foundation

The Centre for Molecular Movies was inaugurated 29th November 2005, at the Niels Bohr Institute, University of Copenhagen. The Centre is made possible through a five year grant from the Danish National Research Foundation (see e.g. www.dg.dk). We aim to obtain real time “pictures” of how atoms are moving while processes are taking place in molecules and solid materials, using ultrashort pulses of laser light and X-rays. The goal is to understand and in turn influence, at the atomic level, the structural transformations associated with such processes.

The Centre combines expertise form RisÃ¸ National Laboratory, University of Copenhagen, and the Technical University of Denmark in structural investigation of matter by synchrotron X-ray based techniques, femtosecond laser spectroscopy, theoretical insight in femtosecond processes, and the ability to tailor materials, and design sample systems for optimal experimental conditions.”

We understand that the Dean of Prof. Harrit’s college, Niels O Andersen, appears as the first name on the Editorial Advisory Board of the Bentham Science journal where the paper was published.

3. Dr. Farrer is featured in an article on page 11 of the BYU Frontiers magazine, Spring 2005: “Dr. Jeffrey Farrer, lab director for TEM” (TEM stands for Transmission Electron Microscopy). The article notes: “The electron microscopes in the TEM lab combine to give BYU capabilities that are virtually unique… rivaling anything built worldwide.” The article is entitled: “Rare and Powerful Microscopes Unlock Nano Secrets,” which is certainly true as regards the discoveries of the present paper.

4. Kudos to BYU for permitting Drs. Farrer and Jones and physics student Daniel Farnsworth to do the research described in the paper and for conducting internal reviews of the paper. Dr. Farrer was formerly first author on this paper. But after internal review of the paper, BYU administrators evidently disallowed him from being first author on ANY paper related to 9/11 research (this appears to be their perogative, but perhaps they will explain). Nevertheless, the paper was approved for publication with Dr. Farrer’s name and affiliation listed and we congratulate BYU for this. We stand by Dr. Farrer and congratulate his careful scientific research represented in this paper.

5. Perhaps now there will finally be a review of the SCIENCE explored by Profs. Harrit and Jones and by Drs. Farrer and Legge and their colleagues, as repeatedly requested by these scientists. We challenge ANY university or established laboratory group to perform such a review. This paper will be a good place to start, along with two other peer-reviewed papers in established journals involving several of the same authors:

6. James Hoffman has written three essays further explaining the implications and results of the paper. Thank you, Jim, for this work! http://911research.wtc7.net/essays/thermite/index.html

7. Important features of the research have been independently corroborated by Mark Basile in New Hampshire and by physicist Frédéric Henry-Couannier in France, proceeding from earlier scientific reports on these discoveries (e.g., by Prof. Jones speaking at a Physics Dept. Colloquium at Utah Valley University last year.) We understand that details will soon be forthcoming from these independent researchers.
Now read the paper for yourself, and let your voice regarding these discoveries be heard!
http://www.bentham.org/open/tocpj/openaccess2.htm then click on “Active Thermitic Materials Discovered…” 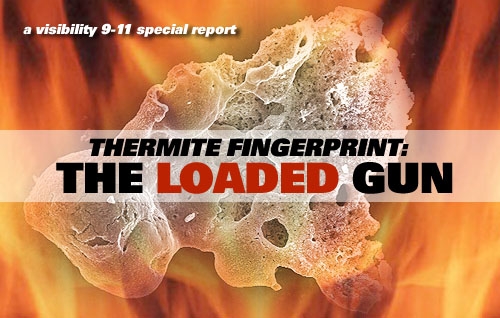 These two important episodes of Visibility 9-11 welcomes back to the program, Kevin Ryan and Physicist Dr. Steven E. Jones.

Kevin is a chemist who is formerly of Underwriter Laboratories. Kevin became a 9-11 whistleblower when he was fired for writing his now infamous 2004 letter to Frank Gayle at the National Institute for Standards and Technology (NIST). Kevin has been very prolific in his research since getting fired by UL and has either authored or co-authored many important papers relating to 9-11 since 2004.

Dr. Jones is a retired physics professor and first emerged in late 2005 with his important paper, Why Indeed Did the World Trade Center Buildings Completely Collapse?, and has continued to do groundbreaking research into the “collapses” of all three high rise buildings on September 11th, 2001.

Kevin and Dr. Jones both sit as co-editors at the Journal of 9-11 Studies and Dr. Jones is the founder of Scholars for 9-11 Truth and Justice. Both have been stalwarts in the scientific and scholarly area of the 9-11 Truth Movement.

Our talks today with Kevin and Dr. Jones features an in-depth discussion on a new paper which has been formally published and peer reviewed by The Open Chemical Physics Journal titled Active Thermitic Material Discovered in Dust from the 9/11 World Trade Center Catastrophe. In this revolutionary new research paper, discoveries made in the World Trade Center dust, particularly the red/gray bi-layered chips, are examined in great detail and include evidence of the thermite fingerprint at every juncture.

The research paper ends with this sentence, which pulls no punches when it comes to what the authors believe these red/gray chips to be:

Based on these observations, we conclude that the red layer of the red/gray chips we have discovered in the WTC dust is active, unreacted thermitic material, incorporating nanotechnology, and is a highly energetic pyrotechnic or explosive material.

Kevin Ryan, one of the co-authors of the research paper says,

My colleagues and I have a new mainstream peer-reviewed paper published today, entitled “Active Thermitic Material Discovered in Dust From the 9/11 World Trade Center Catastrophe.” Basically it shows that high tech explosive/pyrotechnic materials are scattered throughout the WTC dust. How can this be?

Dr. Steven E. Jones, another co-author of the paper, writes:

In short, the paper explodes the official story that ”no evidence” exists for explosive/pyrotechnic materials in the WTC buildings.” The red/gray chips are the “loaded gun” of 9-11.

Find links to the research paper, these episodes, and watch for other planned interviews on this topic at our Visibility 9-11 Special Report, The Thermite Fingerprint; The Loaded Gun.