These days it’s difficult to remember what values the American people share. That’s because the U.S. government does so many things that seem to contradict basic human values. Wars of aggression, torture, kidnapping and indefinite detention, warrantless wiretapping, and so many other oppressions have become standard operational procedure for the U.S. government. Those who recognize and seek to correct this system of abuse soon realize that the key to doing so is to reveal the truth behind the primary driver for all of them—the crimes of 9/11.

A person can do these things to any extent possible and it will not make them any more American than they were before they began. Popular culture and corporate media make every effort to present American patriotism as a sum of these kinds of activities but it is easy to see through that false front. 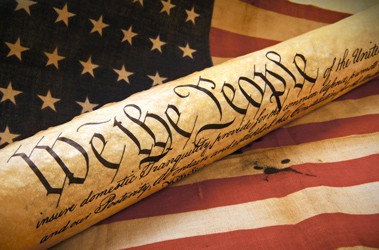 Only one thing makes someone an American and that is support and defense of the U.S. Constitution. The founding fathers of the United States defined Americans as those who are committed to the ideals of the Constitution. To this day, anyone claiming to represent the nation must swear an oath to uphold those ideals.

The U.S. Constitution is comprised of articles that spell out the government’s powers and the process of making amendments. It also includes the 27 amendments that exist today. The first ten amendments, ratified four years after the original text, are known as the Bill of Rights. These include the freedoms of speech, religion, and the press. Also, there are the rights to bear arms, to privacy, and to a speedy and public trial. The rejection of cruel and unusual punishment is another basic tenet of the U.S. Constitution.

Unfortunately, virtually every Article and Amendment of the Constitution has been under attack since September 11, 2001. Yet very few people have risen to support or defend it. In fact, many so-called Americans have encouraged assaults on the core American values.

That abuse began with the violation of Article 1 of the Constitution that rejects starting wars of aggression without having been “actually invaded, or in such imminent danger as will not admit of delay.” Instead of working to determine what actually happened on 9/11 and thereby defend the nation, the Bush Administration immediately invaded Afghanistan, a country that it had planned to invade long before the 9/11 attacks. Sixteen months later, the government invaded Iraq based on what everyone now knows was a pack of lies.

Americans who questioned that anti-American approach were silenced with claims that they were not “supporting the troops” if they did not consent to the growing greed-fueled militarism. The Afghanistan invasion was coupled with the passing of the Patriot Act—an attack on basic Constitutional rights and a failure to preserve those rights as described in Article 2.

In 2006, national polls showed that over one third of Americans believed that federal officials assisted in the 9/11 terrorist attacks or took no action to stop them so that the United States could go to war in the Middle East. At the same time, Americans witnessed a growing list of abuses of their Constitutional rights. These abuses violated the Bill of Rights in nearly every way and were driven by unproven claims about what happened on September 11, 2001.

On the tenth anniversary of 9/11, the Center for Constitutional Rights described how the Constitution had been shredded based on assumptions about the 9/11 attacks. By then, it had also become clear that the government was actually giving aid and comfort to the enemy (violating Article 3) through arming and training terrorists. One might think it obvious that stopping such actions would be the goal of all Americans but to do so one Congress member has had to spell it out in legislation.

Failing to protect Americans against domestic violence (a violation of Article 4), the FBI was found to actually be manufacturing terrorism. It was further learned that some FBI leaders had been facilitating or sponsoring terrorism since long before 9/11. This practice continues today and the manufactured plots have become so obvious that officials are finding it difficult to explain why Americans should take them seriously.

Attorney and author John W. Whitehead has detailed the continuing attacks on the Bill of Rights by writing that,

“What began with the passage of the USA Patriot Act in October 2001 has snowballed into the eradication of every vital safeguard against government overreach, corruption and abuse. Since then, we have been terrorized, traumatized, and tricked into a semi-permanent state of compliance. The bogeyman’s names and faces change over time—Osama bin Laden, Saddam Hussein and now ISIS—but the end result remains the same: our unquestioning acquiescence to anything the government wants to do in exchange for the phantom promise of safety and security.”

The attacks on American values have been so extensive that people often no longer notice how bad it has become. For example, the government has named those captured and tortured in the name of 9/11 as “forever prisoners”—a term that exemplifies the hatred of freedom represented by the new phony Americanism. The fact that one of these men was a central character in building the official account of 9/11 and has since been exonerated for any involvement in those crimes makes no difference.

How can real Americans respond to this ongoing assault against the Constitution by flag-waving, militaristic, greed-driven fools? How can we “support and defend the Constitution of the United States against all enemies, foreign and domestic” by “bearing true faith and allegiance to the same?”

To end the wave of anti-Americanism that began with the crimes of 9/11, Americans have two options. The first is to stand up publicly and fight the attacks on our Constitution by helping everyone understand that the crimes of 9/11 have not been solved. In fact, there are still so many unanswered questions about those crimes that everything done in “response” is almost certainly a crime in itself.

The second option is to end the tyranny through revolution. This was how America began, of course, and that great beginning is enshrined in the precursor to the Constitution—the Declaration of Independence. At the time, the founders stated that, “When a long train of abuses and usurpations, pursuing invariably the same Object evinces a design to reduce them under absolute Despotism, it is their right, it is their duty, to throw off such Government, and to provide new Guards for their future security.”

As Americans it is our duty to throw off the tyrannical abuses of power that are threatening to end America. That duty starts with questioning 9/11—the driver behind all of it.

The Facts Speak for Themselves