In The American Trajectory: Divine or Demonic? David Ray Griffin traces the trajectory of the American Empire from its founding through to the end of the 20th century. A prequel to Griffin’s Bush and Cheney, this book demonstrates with many examples the falsity of the claim for American exceptionalism, a secular version of the old idea that America has been divinely founded and guided.

The Introduction illustrates the claims for divine providence and American exceptionalism from George Washington to the book Exceptional by Dick and Liz Cheney. After pointing out that the idea that America is an empire is no longer controversial, it then contrasts those who consider it benign with those who consider it malign. The remainder of the book supports the latter point of view.

The American Trajectory contains many episodes that many readers will find surprising:

The conclusion deals with the question of how knowledge by citizens of how the American Empire has behaved could make America better and how America, which had long thought of itself as the Redeemer Nation, might redeem itself.

“David Ray Griffin is a master of the art of courageously, constructively and meticulously exposing and debunking dangerous myths, propaganda and disinformation. He is a therapeutic disinfectant for brainwashed minds. Just as his previous book, Bush and Cheney: How They Ruined America and the World, was essential reading to understand the world in which we now live, The American Trajectory: Divine or Demonic? is essential reading to understand the true nature of the ‘exceptional’ role of the United States in world affairs—past, present and future.”—John Whitbeck, International lawyer; author of The World According to Whitbeck 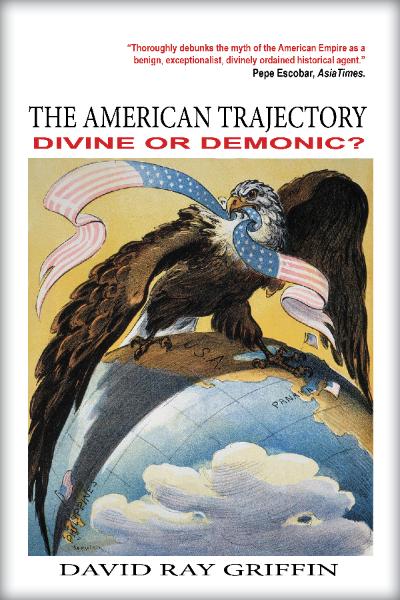 In past centuries, U.S. political leaders described America as divinely founded and guided; some still do. But now leaders generally secularize their language, speaking of American exceptionalism. Whether this idea is endorsed or criticized, the issue is now usually discussed in terms of the American Empire, whether it is benign or malign. The chapters of this book show that the American empire has been more malign than benign, more demonic than divine.


1 The Beginning to World War I:
Deals with expansionism (including slavery and the genocide of Native Americans) and early imperialism (going overseas to take of Hawaii, Cuba, the Philippines et al.)

2 World War I:
Gives special attention to role of the sinking of the Lusitania in getting America into the war; then discusses reasons for the quick rise of World War II.

3 Between the Wars:
Deals with the first offensive against Communism, the creation of dictatorships in the Western hemisphere, and the drive to prevent war by forming the League of Nations.

4 World War II:
Treats America’s wartime planning for the postwar world, playing politics during the war, and the myth that America was devoted itself to the defense of freedom.

5 Pearl Harbor:
Provides evidence contrary to the US story that the attack was unprovoked and a surprise, then deals with the cover-up of the Roosevelt administration’s role.

6 Hiroshima and Nagasaki:
Deals with the creation of the atomic bombs, their use on Japan (rather than Germany), and the myth that they were necessary to win the war without the loss of a huge number of US lives.

7 The United Nations:
The UN was created with the aim of overcoming the weaknesses of the aborted League of Nations, but then it was also incapable of preventing wars, because the US and the USSR would not give up their imperialistic dreams.

9 U.S. Imperialism during the Cold War:
Using the threat of Communism, the US intervened in (for example) the Philippines, Iran, Guatemala, Cuba, Brazil, the Dominican Republic, Greece, Indonesia and the Iran-Iraq war.

10 The Vietnam War:
Shows how Eisenhower deceitfully led America into the war, how Kennedy and especially Johnson enlarged it, and then how Nixon led the war to an ignominious end.

11 False Flag Operations:
Treats ways in which the US used false flag operations to extend its empire, especially Operation Gladio.

12 Some Post-Cold War Interventions:
Attacks on Panama and Iraq (1991), after demise of the Soviet Union, show that US interventions were not defensive.

13 The Drive for Global Dominance:
Whereas the US had long been aiming for global dominance, the goal to create a global empire became manifest.

Conclusion:
Realizing that America is not exceptional could lead to a better country.

“David Ray Griffin has done it again. His new book should be read as a prequel to the seminal Bush and Cheney: How They Ruined America and the World. Supported by extensive research, Griffin thoroughly debunks the myth of an American Empire as a benign, exceptionalist, divinely ordained historical agent. Instead of Manifest Destiny, what reality-based Griffin charters is the ‘malign’ ways of US foreign policy since the 19th century. . . . He unmasks the lies surrounding the true story of the Pearl Harbor attacks. He asks: If the US was really guided by God, how could it ‘choose’ to bomb Hiroshima and Nagasaki, knowing that “the atomic bombs were not necessary to end the war?” . . . This sharp, concise history of the American Empire ultimately demonstrates, in Griffin’s analysis, the ‘fraud’ of endorsing self-praising American Exceptionalism. A must read.”—Pepe Escobar, Asia Times/Hong Kong; author of 2030 and Empire of Chaos