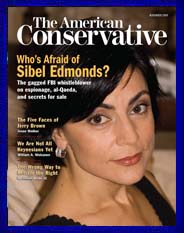 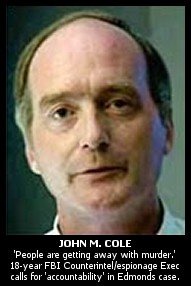 John M. Cole, a former FBI Counterintelligence and Counterespionage Manager, has publicly confirmed the FBI’s decade long investigation of the former State Department Official Marc Grossman. Cole worked for 18 years in the FBI’s Counterintelligence Division. According to Cole, as in over one hundred cases involving Israeli espionage activities directed against the US government, the Grossman case was covered up and buried despite mountains of evidence that was collected.

Here is the public response from John Cole after the publication of The American Conservative magazine’s cover story:

“I read the recent cover story by The American Conservative magazine.
I applaud their courage in publishing this significant interview. I am fully aware of the FBI’s decade-long investigation of the High-level State Department Official named in this article, Marc Grossman, which ultimately was buried and covered up. It is long past time to investigate this case and bring about accountability…”

In November 2006, in an by Jeff Stein published by “Congressional Quarterly” on the cover-up of espionage cases involving Israel, Cole was quoted extensively:

“John M. Cole, an FBI spy catcher who retired in 2004, says that from 1993 to 1995 alone, he had “125 open cases” of Israeli espionage, representing nearly half of all the investigations carried on in his Global Unit, part of the now-defunct National Security division.” Inside the FBI itself, Cole said, tracking suspected Israeli spies was hush-hush.In a sharp break with FBI procedures, he was prohibited from notifying field offices when an investigation crept into their jurisdictions. “No one was supposed to know we were investigating the Israelis,” Cole said.”

“The 125 figure “makes sense,” another former top FBI counterintelligence official said, speaking only on condition that he not be identified because of the issue’s sensitivity. This official called the Israeli embassy’s denials “horse [manure].” In fact, he said, U.S. officials repeatedly warned the Israelis to back off. But the finger-wagging only seemed to energize them. “We would call them in, call them on the carpet, and next week there would be 10 more cases,” he said. The Justice Department never seemed much interested in prosecuting them, he and other counterintelligence veterans said. Agents would get pissed off,” said the former top official. “We knew they were going to walk, that they were going to get a pass. . . . It was frustrating.”