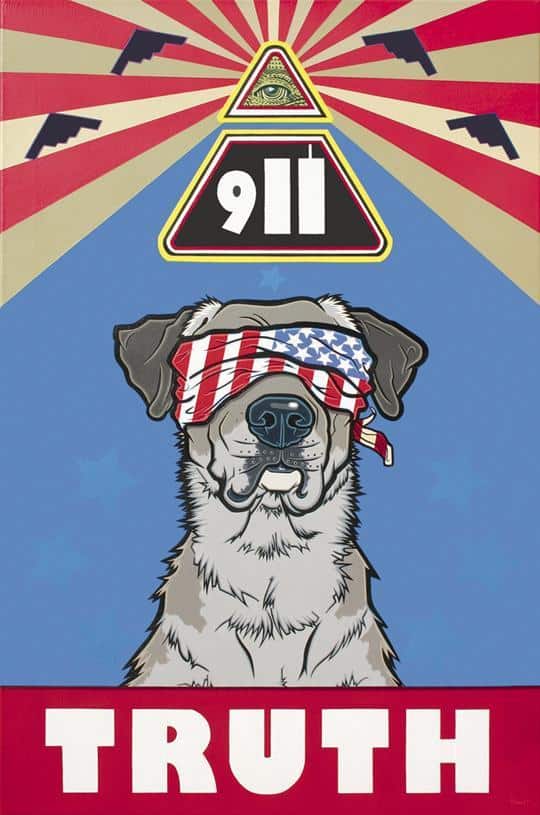 Nathan Janes, a Port Clinton native, painted “With Liberty and Justice for All.” He describes the painting as an expression of America’s unwillingness to question the findings of the 9/11 Commission Report.

Nathan Janes’ painting could create some controversy, but all he wants to do is get to the truth.

Janes, a Port Clinton native, recently completed a painting of a dog wearing a blindfold with “911” and “truth” above and below the dog.

“It’s kind of hard for people to question whether the government lied or had a part in it,” he said. “I’m not say anything’s a hoax. I’m saying there’s information that’s not been released or told.”

Janes started researching conspiracy theories surrounding 9/11 last summer and said he felt he was just getting more questions and not enough answers.

*”I just felt kind of compelled to because the issue needs to be out there,” Janes said. “People might find themselves asking the same questions I’m asking.”

Janes, a 1997 graduate of Port Clinton High School, said the “all-seeing eye” and the silhouettes of three B-2 stealth bombers represent the government’s power over the people in modern times.

“He was an art machine,” Radloff said. “He’s high energy. He has a real passion for art.”

Janes has been painting since he graduated from The Columbus College of Art & Design in 2001. His subject matter has typically focused on dogs and supporting animal welfare.

The “911 Truth” painting is Janes’ first attempt at a controversial issue.

“I felt I was creating something greater than my other works,” he said. “There’s something more significant to it than just a smiling dog.”

Janes said he has not had any buyers for the painting, but instead plans to promote the image and message behind it.

Though many people might disagree with the subject matter, Janes said he painted it to make people think.

“I just want to use it as tool or an image that invokes thought and causes the viewer to think or come up with questions on their own,” he said. “It’s all about getting the information out there.”