On April 12th, 2010 ABC Radio National’s “Counterpoint” host Michael Duffy decided to weigh in on the truth of the 9/11 events. In this clearly biased and ludicrous attack on those who would question the still unexplained events of September 11, 2001, Duffy demonstrated he has done little research into the matter. Seemingly, he has decided research is neither warranted nor required to make wild assumptions about and apply derogatory labels to 9/11 researchers and their questions. 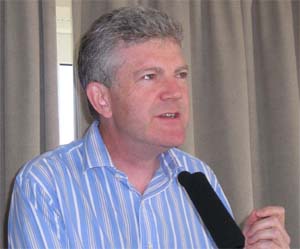 In this short and emotive hit piece Duffy uses an excerpt from a recent lecture given by Clive Williams, Adjunct Professor at the Strategic and Defence Studies Centre at the Australian National University (ANU), to provide the spin. Professor Williams lays out an overview of the 9/11 Conspiracy Theories as part of his lecture called “Terrorism Conspiracy Theories and the 1978 Sydney Hilton bombings, Lockerbie, 9/11 and the London 7/7 bombings”. This lecture will be played in full on Radio National’s “Big Ideas” on Sunday 18th April at 5pm and is available in podcast at the ABC. In this excerpt Williams skims over the evidence of an alternate “conspiracy”, citing the predictable “straw man” arguments and loose journalistic attempts to look at the evidence, using the Discovery Channel’s laughable documentary, “9/11: Science and Conspiracy” as a reference. Ironically, Williams uses these absurdities ignorantly in his attempt to debunk the experts who are actually qualified to comment on such matters, and — surprise, surprise — he also conveniently forgets to mention them. In a desperate attempt to make sense of his “reality”, Williams rolls out the blind academics’ favourite proof that 9/11 was just as we were told — yes, it’s the argument that the government is, without doubt, just too damn incompetent to pull off such a complicated plan! Unfortunately, this so-called educator misses the irony in the stark “official reality” that 19 poorly trained and ill-equipped Arab hijackers did pull it off!

Duffy introduces this crude attempt at journalism as follows:

“Just who was responsible for the 9/11 attacks on New York and Washington? Was it Osama Bin Laden or are there other contenders? Perhaps it was rogue government agents operating with the tacit support of an equally shadowy group of industrialists. Or maybe it was revenge-seeking aliens who escaped from area 51.”

For readers who wish to listen to Duffy’s Counterpoint piece, “Terrorism and Conspiracy Theories”, it can be found here: www.abc.net.au/rn/counterpoint/stories/2010/2870592.htm

The fact that no criminal investigation of this mass murder has ever been carried out and those murdered included ten Australians is apparently of no consequence to the Australian Broadcasting Corporation, as they continue to fail to report on the real 9/11 investigative news. I and many thousands of other Australians continue to wonder why we have not heard from our taxpayer-funded news service about the discovery of nanothermite in the dust by a team of international scientists, or about the demands of more than one thousand Architecture and Engineering Professionals for a new investigation into the building collapses. It is now clearly proven for those who care to look that without added energy from explosives, the three building collapses on 9/11 defy both logic and Newton’s Laws of Motion. To the great shame of “our” ABC, its viewers and listeners are without a clue of this fact based on what their so-called journalists have produced to date.

A case can now be clearly made that the ABC is failing in its fiduciary duty to the Australian public and is actively supporting the cover-up of the events of 9/11. This is amply demonstrated with this simple listing of some of the important events they have failed to report on in Australia:

It is probably most disturbing for us who care, however, that the ABC has never reported to the Australian public that the 9/11 victims’ families are demanding a new investigation and have broad support by the majority of the world’s population in questioning the official 9/11 “conspiracy theory”. Please, Mr Duffy and Mr Williams — please think again and consider that maybe it is you that are in need of a “reality check”?

Now, if one wished to make an excuse for the ABC, that perhaps they have not been made aware of these “realities”, I will list what I personally know they have received from the Australian public to date:

Unfortunately for us, the harsh reality of the ABC’s failure to report the news about 9/11 explosive evidence is that the victims’ families continue to suffer without closure and without justice, while wars in their name continue without any clear justification other than the official myth of 9/11.

Mr. Duffy and Mr. Williams, I will remind you, Sirs, that without truth there can be no justice and without justice there will never be peace on this Earth. Shame on you and the ABC. You are a disgrace to this great nation and to the field of journalism!

Complaints may be made to the ABC here: www.abc.net.au/contact/complain.htm