(See Bill’s suggested action item at end of this article, to get involved.)

Bohannan is a right wing pro-military radio voice, who’s audience has probably NEVER been exposed to 9/11 truth issues. “The Shell Game” author, Steve Alten, came on after an Oil Executive’s interview, at about 39:50 in the 1.5 hour show. At about 54:56 it gets REALLY interesting when a caller calls in to discuss 9/11 as a false flag attack. Which unleashes Alten into a deep discussion of 9/11 truth issues.

All hell brakes loose in the next few minutes, as Alten enters the realms of 9/11 truth, explaining to the stunned Bohanan and and his virgin (9/11 truth issue) audience that there is a mass 9/11 truth movement in America that involves engineers, police, private investigators, and many other experts challenging the official 9/11 story.

Alten gives Bohannan some rope at the beginning, before he yanks it to give Bohannan’s virgin audience some powerful new issues to chew on. Alten takes on the BIG OIL guest (and big energy’s lies) that preceded him on the show, as well as the rational for war in Iraq, BUT spends most of his time TAKING ON THE 9/11 COVER UP, War Games, Evidence Destruction at the WTC, and WTC BUILDING 7’s MYSTERIOUS and UNINVESTIGATED COLLAPSE!

When Alten broaches 9/11 truth issues, Bohannan challenges Alten, with the ‘you’re telling me that you know facts that no one else in America knows about 9/11’ line. Alten responds that “There is a massive 9/11 truth movement of highly competent professionals in America, that involves tens of thousands of activists and researchers.”

Alten explains that false flag terror events often require that simultaneous war games be held to enable such false flag events to happen, and that is what happened on 9/11. Alten discovered this disturbing information while researching for his new historical fiction book, he explains to Bohannan.

Alten then talks about multiple war games mysteriously held to draw our Air Force fighters away from New York and DC on 9/11, that enabled the strikes of that day. Alten says, “Shocking to me, when I did my research for this book, was that there were 5 separate War Games being conducted in the North Eastern quadrant of our country with NORAD, which sent out jet fighters over parts of Alaska and Iceland and over Canada. Which pulled them out of the North Eastern section of the country.

Bohannan, bristles, and then challenges, Alten, head on, “Are you suggesting United States complicity in the attacks of 9/11?”

Alten, “I’m just stating what happened. You can draw your own conclusions from it.”

Bohannan, “Well I, you’d have to draw something a lot more serious than that. I mean it would have to show a, a-a-a series of connections, including of course, knowing that the attack was about to occur. Then you would be getting into, not only the, uh, the spirit of the book, “The Shell Game,” but uh, but uh, serious implications.” The show goes to break.

Bohannan (coming back from break): “We got interrupted by the break, but before that you were saying something interesting Steve, that there were, uh, war games being held at the time of 9/11, under uh, questionable timing. And here you’ll have to go into some of the things you were telling me during the break, because the audience didn’t get to hear those, but just tell me what it is that you say you’ve unearthed here.”

Alten, “Well if I can read a quick paragraph from the book [The Shell Game], which will explain it, um . . .”

Alten (quoting from “The Shell Game”), “Did they, the US government intelligence community, know of a coming Al Qaeda attack before 9/11? YES, in fact, there were at least 5 intelligence services across that country that warned us. Did they try to stop them? YES, but they were prevented from doing so.”

Bohannan cuts in, exasperated, “On that particular date, we knew there was an attack coming!?”

Alten, again quoting facts from his historical novel “The Shell Game”, continues, “Well, FBI field agents in both Minneapolis and Phoenix who were close to exposing the plot, were repeatedly and purposefully bottle necked from taking action by a single supervisor, Dave Frasca, who would later receive a PROMOTION for his actions. On the day of the attacks the Joint Chiefs [of Staff] under President Bush and Dick Cheney’s personal directions, scheduled and conducted 5 separate war game drills that purposely pulled interceptor jets away from the North Eastern aerospace corridor, while DELIBERATELY inserting false blips on air traffic screens, to simulate, of all things, hijacked airliners. Military jets that routinely intercept aircraft within minutes, were delayed an unfathomable 80 MINUTES. Most never even entered the fray, while dedicated pilots and air traffic controllers desperately tried to determine what was real from what was staged. An FAA administrator, quote unquote, “ACCIDENTALLY” destroyed the recordings of the day’s tragic events, and he too was later promoted.”

Alten continues after quoting his book [The Shell Game], “Now, those are the FACTS. ”

Bohannan, “Now again, we’re speaking from your work of fiction, but you say, that, that in this particular case, you are using factual material?”

Alten, “The Shell Game is filled with factual material, and . . .”

Bohannan, “And this was some of that factual material.”

Alten, “Yes, this was some of the factual material.”

Bohannan, “Now, how come, uh, we have not had hearings on this, and this has been blown wide open, and uh, impeachment proceedings against the Vice President has, etc. etc. etc. I mean how come you’re the ONLY person who’s found this and no one else has seen fit to pursue this?”

Alten, “Actually there are tens of thousands of people that have found it, and that make up part of the 9/11 truth movement. I’m not saying that I’m part of the movement.”

Bohannan, “But, the government’s not interested in pursuing this, because we wished, what, to cover up this, is this what we’re talking about here? And not ONE person involved in this is, is, patriotic enough to expose this. There’s a vast conspiracy that was ah, ah, behind the purposeful destruction of, of, uh, I guess Donald Rumsfeld wasn’t behind it since he almost got killed at the Pentagon, but . . .”

Alten, “Rumsfeld wasn’t anywhere near where the Pentagon got hit”

Bohannan, “Rumsfeld was in the Pentagon, what are you talking about? He was in the building, he helped rescue people.”

Alten, “Well, uh, let me just point out a couple more of the things, and you can come to your own conclusions.”

Alten again quotes from his book [The Shell Game], “Intelligence agencies around the world knew how and when the attacks were to occur but there warnings were ignored. Wall Street investors certainly knew a day before the attacks, domestic and foreign investors placed an unprecedented number of “put orders,” a put order being a leveraged bet that a stock would drop on the airlines and companies that would suffer devastating losses [on 9/11]. Now, I can go on and on about these CONVENIENT COINCIDENCES. I’m not a conspiracy theorist . . .”

Bohannan, “OF COURSE YOU ARE! You put this stuff forward here, and say well draw your own conclusions, but why have you not reported this to, uh, the appropriate Congressional oversight, or are they part of the cover up also?”

Alten [had been trying to cut in over the above assertions], “I, I’m just an author of fiction . . .”

Alten, “There are thousands of people out there who have attempted to do these things. You have to realize that the 9/11 . . . let me ask you a question, when we were investigating Monica Lewinski’s stained dress we invested 80 MILLION dollars of our tax payer money to investigate that stained dress. You know how much the 9/11 investigations were budgeted?”

Bohannan, “No, I couldn’t site a figure.”

Bohanna, “Well that may be a misallocation of tax dollars, but that doesn’t mean that . . .”

Bohannan, “Shipped WHAT to China?”

Alten, “All the debris from the World Trade Center.”

Bohannan, “I certainly will. I will absolutely check that. Well, I guess we could stay with that all day, but as you say, draw your own conclusions.”

Alten goes on in the interview to explain to Bohannan’s [virgin listeners as regards 9/11 truth audience] the goals of PNAC, and that elements of the government made 9/11 happen to enact the PNAC goal of a “New Pearl Harbor.” He says the fox is guarding the hen house, and your asking them to investigate it.

Bohannan says, “Well there is a conspiracy, we’ll be right back.”

Listen to this entire historic interview [MUCH MORE 9/11 TRUTH ISSUES TO LISTEN TO] at the below link where you’ll hear, for example:

Alten says that World Trade Center 7 was IMPLODED, and asks “How do you lose a 47 story building with no explanation as to why it collapsed?”

Alten, “The 23rd floor of that building was where the intelligence services had there installations and they were running in and out of there the entire day. 5 hours after the World Trade Centers [towers] collapsed, that building mysteriously collapsed.”

Bohannan, “Welp, I guess you’d just have to . . . what was the name of that building again?”

To have Steve Alten on mainstream national media, at a time when 9/11 Commissioner Bob Kerry is about to announce the need for a permanent 9/11 investigative body to handle new surfacing 9/11 facts, and when the European Parliament held a 9/11 truth event, after the head of the Japanese opposition party on national television made a case of 9/11 as an inside job . . . is a powerful thing to have happen.

SHARE THIS interview WIDELY, POST IT EVERYWHERE. Write articles about it. Blog it! Etc. etc. BECOME THE MEDIA !!

WHY? Because if the 9/11 truth seekers among us do everything we can to drive “The Shell Game” to #1 on the New York Times best seller list, we will insure that explosive interviews like this exposing hard 9/11 questions, get asked aired again, and again, and again. 9/11 truth has a new hero, and his name is Steve Alten. Be apart of making history, and finally awakening America to the fact they’ve been lied to about 9/11. “The Shell Game,” and its author are powerful tools for the 9/11 truth movement to make the most of. 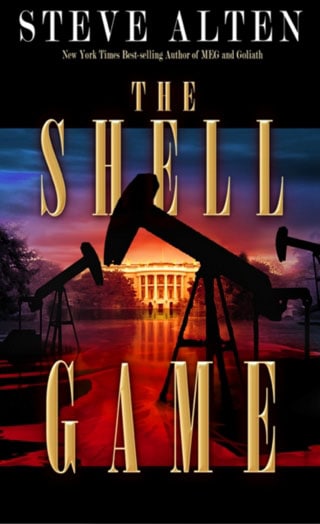