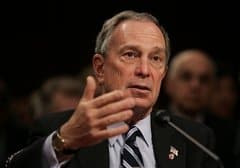 WASHINGTON, March 21 — Testifying at a Senate hearing on Wednesday, Mayor Michael R. Bloomberg pleaded for at least $150 million in annual federal aid to monitor and treat thousands of people who became ill after being exposed to dust and debris at ground zero.

The mayor also called for the creation of a special fund to compensate those who became sick, urging that the city and its contractors be protected from potentially ruinous liability as a result of lawsuits brought by rescue and recovery workers who have argued that they were not adequately protected from the environmental hazards left by the World Trade Center’s collapse.

Senators from both parties expressed sympathy for the mayor’s arguments, which were delivered at the start of a three-hour hearing of the Senate Committee on Health, Education, Labor and Pensions.

A panel appointed by Mr. Bloomberg last month put the total cost of evaluating and treating everyone potentially affected by the trade center attack at $392.6 million a year. The panel called for the federal government to provide, at a minimum, $153 million a year to sustain health programs run by the Mount Sinai Medical Center, the Fire Department and Bellevue Hospital Center.

Mr. Bloomberg told the committee’s chairman, Senator Edward M. Kennedy, Democrat of Massachusetts, and Senator Hillary Rodham Clinton, Democrat of New York, that he supported a bill they introduced that would provide $1.9 billion for 9/11 health monitoring and treatment between 2008 and 2012.

Mr. Bloomberg noted that more than 8,000 workers had joined lawsuits accusing the city and some 150 contractors of neglecting to protect them during rescue and recovery operations at ground zero. “The city came together after 9/11, but this drawn-out and divisive litigation is undermining that unity,” he said.

Congress has capped the city’s potential liability from the 9/11 attacks at $350 million and set up a $1 billion fund to insure the city and its contractors from suits arising out of the ground zero cleanup.

But at a news conference after the hearing, Mr. Bloomberg said of the liability cap that “there are people who question whether that law would stand up” if challenged in court. He also called the $1 billion insufficient.

If Congress created a compensation fund and gave immunity to the city and its contractors from liability, the city would transfer the $1 billion from the insurance fund to the compensation fund, the mayor said.

After the hearing, Mrs. Clinton told reporters that the compensation fund was an important proposal, but she stopped short of endorsing it.

Mr. Bloomberg, a Republican, was surrounded at the hearing mostly by Democratic lawmakers from New York who have sought more aid for 9/11-related health problems. The two Republican senators present asked gentle questions.

Senator Michael B. Enzi of Wyoming, the committee’s ranking Republican, said the mayor’s request “adds up to quite a bit of money.” He told the mayor, “I will be giving you a request to more carefully delineate and more concisely delineate the dollars that you’re talking about.”

Senator Tom Coburn, an Oklahoma Republican and a physician, said he did not doubt that there were “a lot of pulmonary problems associated with large particulate intake” at ground zero, but he asked the mayor, “Is there a point at which this stops in terms of a federal obligation?”

Mr. Coburn then quickly added, “Rather than have a yearly appropriation for this, why don’t we set up an endowed trust?” The mayor later told reporters that he was open to the idea, but said, “The real issue is: Can we get money every year?”

Doctors from all three 9/11 health programs, as well as Dr. James M. Melius, an occupational health expert, and Jeanne Mager Stellman, an authority on the exposure of military personnel to herbicides used in the Vietnam War, also testified.

After his appearance at the hearing, the mayor met privately with Michael O. Leavitt, the secretary of health and human services, and Representatives Carolyn B. Maloney and Vito J. Fossella of New York and Christopher Shays of Connecticut to discuss 9/11 health issues.

He also met with the House speaker, Representative Nancy Pelosi of California, and Representatives Charles B. Rangel and Peter T. King of New York, to discuss the city’s legislative agenda.

Excellent video by Penny Little, 9/11: Dust and Deceit at the World Trade Center