In the spirit of American patriots who on December 16, 1773 rebuked Great Britain’s tyranny by tossing crates of British tea into Boston Harbor, the Boston 9/11 Truth Committee, today enacted their own “9/11 Truth Tea Party,” calling on “all American Sons and Daughters of Liberty to cast-off the tyranny, deceit and lies imposed on the American public by way of the official 9/11 Commission Report.”

Editor’s Note: On this truly historic day, the anniversary of the original Boston Tea Party in 1773, modern day Patriots cast the “9/11 Commission Report” into harbors in Boston and across the US, in reenactments of the original demand for representation.

Similar events inspired by the Boston group sprouted up around the country including dc911truth.org, who “shredded” the 9/11 Commission Report in front of the White House. Sf911truth.org dumped a larger than life replica of the report into the San Francisco Bay while members of pa911visibility.com tossed an actual copy of the report into the Delaware river. Similar actions took place in Milwaukee, St. Louis, and other places around the country, all in an act of protest against the 9/11 Commission Report and in solidarity with the 9/11 activists in Boston.

The events were generally kicked off with a reading of the Boston 9/11 truth resolution (below) or similar document, followed by a symbolic dumping of the report into the water. We’ll continue to add event photos and reports as they come in. Thanks to the websites of each of these groups as well as 911blogger.com for helping to compile the record. 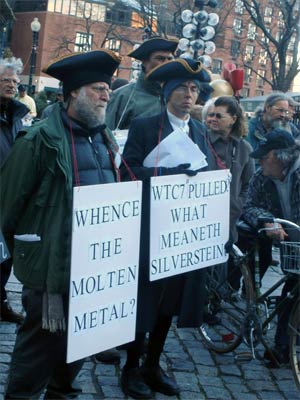 Citizens of the United States of America, sisters and brothers of the six New England States, and all honorable servants of our great Republic … the Day of Reckoning is upon us. The lies and deception of the tyrannical elite within our government, especially regarding the misleading 9/11 Commission investigation and cover-up of the devastating attacks of September 11, 2001, have infected our beloved democratic process and usurped our liberties for far too long. The Executive, Judiciary and US Congress are hereby advised that the citizenry of these United States holds an uncompromising DEMAND for:

An exhaustive reinvestigation of all public testimony, physical evidence and scientific analyses/reports as they relate to the physical destruction of life and property inflicted during the attacks on 9/11;

Whereas, the 9/11 Commission failed to investigate or even mention the collapse of the 47-story World Trade Center Tower 7. It is highly suspicious that WTC7 is the first steel framed high-rise in history to collapse from small fires alone.

Whereas, the 9/11 Commission lied in stating that the center of World Trade Center Towers 1 and 2 contained only air ducting and elevators. In reality the center of the towers each contained 42 massive, vertical steel support columns, which were the core supports for these towers.

Whereas, the 9/11 Commission failed to investigate the fact that the each of the three tower collapses on 9-11-01 exhibited eleven classic characteristics of well-engineered building demolitions.

Whereas, the 9/11 Commission failed to investigate and explain how the Pentagon, the most-guarded airspace on the planet, with its own missile defense system, was penetrated on 9-11-01.

Whereas, the 9/11 Commission failed to investigate members of the Administration who posted their radical military plan in Sept. 2000. This plan stated that their goals would not be met unless a cataclysmic event occurred, “like a new Pearl Harbor,” to get US citizens on-board with their ruthless agenda.

Whereas, the 9/11 Commission failed in its original mandate. Over 100 other questions, omissions, inconsistencies and implausible scenarios constitute gross malfeasance in its obligation to the 9/11 victims’ families to conduct a thorough investigation.

We, the people of the United States of America, today, in Boston, on the sixteenth day of December in the year two thousand and six, do hereby REJECT the findings contained in the Report of the Kean-Hamilton Commission to Investigate Terrorist Attacks Upon the United States, and, therefore, DEMAND an IMMEDIATE, New and Independent 9/11 investigation with subpoena powers, independent 9/11 researchers and oversight by 9/11 families.

Hearken unto us and be not afraid, for the end of the era of lies and deceit is at hand.

March to bridge and into the drink Dr. Bob Bowman Kevin Barrett Additional clips will be posted after the holidays at: www.infinite-prism.com/truth

This Saturday, Dec. 16, 2006, dc911truth held a mock shredding of the 9/11 Commission Report, in Lafayette Park, in front of the White House, from 11:00 am to Noon. This event is one of a series of events sponsored by 9/11 truth groups across the country on the anniversary of the Boston Tea Party. We wanted to show our solidarity and support for the 911truth groups in Boston, San Francisco, Milwaukee, St. Louis, and elsewhere.

The event was kicked off with a reading of the Boston 9/11 truth resolution by Matt Sullivan, followed by a presentation by Webster Tarpley. Then members of dc911truh.org took turns reading from David Ray Griffins list of 115 lies, omissions and distortions of the Kean-Hamilton-Zelikow report. As each lie was read out, another page of the report was ripped out and fed to the shredder. The event lasted about 90 minutes and attracted the interest of dozens of tourists and secret service in addition to the roughly thirty people who came specifically for the Shredding.

Afterward the group went to lunch at a local sandwich shop. All-in-all a successful event.

In solidarity and in spirit with the Boston Tea Party for 9/11 Truth and the courageous American patriots who, on December 16, 1773 said “No!” to lack of representation and tyranny by tossing crates of British tea into Boston harbor, the Northern California 9/11 Truth Alliance will enact a 9/11 Truth Tea Party on December 16, 2006, calling upon those who cherish the ideals of liberty and justice to cast off the tyrannies imposed on the American public and the world that were sold by governmental lies immediately after 9/11, and later through compounded lies and coverups within the official 9/11 Commission Report.

Thank you to the people who coordinated the Boston Tea Party for the idea, and thank you to those that showed up today.

Our tea party for 9/11 truth was a success. We had Channel 12 News (ABC) covering the event. We started off with a march on Wisconsin Ave. in downtown Milwaukee. We passed out 9/11 Truth DVD’s and flyers. We burned four 9/11 Commission Reports and dumped the ashes in Lake Michigan. We had 9/11 truth activists come from Madison, Sheboygan, and Darien, Wisconsin. We also had a number of members from the Lone Lantern Society come up from Chicago. We had some great speakers at our makeshift podium in the park overlooking Lake Michigan. We really enjoyed our dressed up Colonist, Glenn Davis, reading his 9/11 Truth proclamation from a scroll as we watched The 9/11 Commission Report burn in a Weber Grill. We finished our event off with some grilled hot dogs and of course we had ice tea. I want to personally thank all those that showed up, including Channel 12 News. We are making a difference and the 9/11 Truth Movement will continue to grow. We will never go away until the truth is told and justice is served.

Milwaukee’s ABC news station Channel 12 WISN covered the Milwaukee Tea Party, making mention of the coordinated actions happening across the US. Video is available from youtube, posted at http://www.911blogger.com/node/5348 Thank you to this station for reporting real news!!

St. Louis 9/11 activists gathered along the shore of the Mississippi River to join in solidarity with groups across the country in rejecting the lies published the 9/11 Commission Report. Mike Berger kicked off the event by raising some of the more striking omissions not mentioned in the report. Then activists read from the long list of lies and took turns shredding pages of the report. It is our hope that in gathering to speak out against these lies, we show other Americans that they too can publicly voice their dissent and call for a real, independent investigation.