A federal judge issued the Bush administration a sharp setback on Thursday, ruling that five Algerian men have been held unlawfully at the Guantánamo Bay detention camp for nearly seven years and ordering their release.

It was the first hearing on the government’s evidence for holding detainees at Guantánamo. The judge, Richard J. Leon of Federal District Court in Washington, said the government’s secret evidence in the case had been weak: what he described as “a classified document from an unnamed source” for its central claim against the men, with little way to measure credibility.

“To rest on so thin a reed would be inconsistent with this court’s obligation,” Judge Leon said. He urged the government not to appeal and said the men should be released “forthwith.”

The habeas corpus case was an important test of the administration’s detention policies, which critics have long argued swept up innocent men and low-level foot soldiers along with hardened fighters and terrorist commanders.

The judge also ruled that a sixth Algerian man was being lawfully detained because he was a facilitator for Al Qaeda, arranging travel for others to fight the United States, and planned to become a fighter himself. 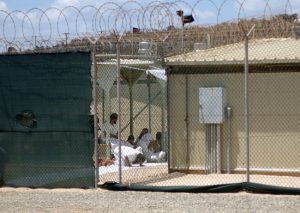 The six men are among a group of Guantánamo inmates who won a 5-to-4 Supreme Court ruling in June that the detainees had a constitutional right to seek their release in federal court. The decision said a 2006 law unconstitutionally stripped them of their right to contest their imprisonment in habeas corpus lawsuits.

A weeklong hearing for the Algerians, in which all of the evidence was heard in proceedings that were closed to the public, was the first in which the Justice Department was required to present its full justification for holding specific detainees since the Supreme Court ruling.

Judge Leon, in a ruling from the bench, said the information gathered on the men had been sufficient for intelligence purposes but not for the court.

He said the government’s case, which contended that the five men planned to travel to Afghanistan and take up arms against the United States, relied exclusively on information obtained from the single unnamed source.

Judge Leon, who was appointed by President Bush, ruled in 2005 that the men had no habeas corpus rights, and he had been expected to be sympathetic to the government in the current case.

As he read his decision in a quiet courtroom, he seemed to bridle at the Supreme Court’s ruling, saying its effect was “to superimpose the habeas corpus process into the world of intelligence gathering.”

He said his decision, which involved men first detained in Bosnia far from the war in Afghanistan, should not be read as a reflection on the strength of the cases against other detainees, more than 200 of whom have filed habeas corpus cases. “This is a unique case,” he said.

Still, there was a buzz in the gallery when he announced that the government had not proved its case against the five men. In urging the government not to continue to fight the case, he noted that an appeal could take as long as two years.

“Seven years of waiting for our legal system to give them an answer to a question so important is, in my judgment, more than plenty,” he said.

The men listened to the proceedings over a phone line from Guantánamo. If the government appeals they could remain there indefinitely. If it does not, one of their lawyers, Stephen H. Oleskey, said he expected that they would return to Bosnia, where they would be freed.

In a statement, the Justice Department did not say whether it would appeal, only that it was reviewing the case. It added that the ruling was “perhaps an understandable consequence of the fact that neither the Supreme Court nor Congress has provided rules on how these habeas corpus cases should proceed in this unprecedented context.”

Robert C. Kirsch, one of the six detainees’ lawyers from the law firm Wilmer Hale, said the case showed “the human cost of what can happen when mistakes are made at the highest levels of our government, and no one has the courage to acknowledge those mistakes.”

Lawyers for other detainees said the decision was a repudiation of the Bush administration’s effort to use the detention center at the American naval base at Guantánamo Bay, Cuba, to avoid scrutiny by American judges. President-elect Barack Obama has promised to close the prison.

“The decision by Judge Leon lays bare the scandalous basis on which Guantánamo has been based — slim evidence of dubious quality,” said Zachary Katznelson, legal director at Reprieve, a British legal group that represents detainees.

But Andrew C. McCarthy, a former federal terrorism prosecutor, said the decision highlighted the difficulties of courts’ reviewing wartime decisions about who qualifies as an enemy combatant. Mr. McCarthy said those were decisions “our system of divided powers consigns to military professionals in the executive branch, not judges.”

The five men who were ordered freed included Lakhdar Boumediene, for whom the landmark Supreme Court ruling in June was named. The one detainee Judge Leon found to be lawfully held, Bensayah Belkacem, has been described by intelligence agencies as the leading Qaeda operative in Bosnia.

Judge Leon said there had been some corroborating evidence that linked Mr. Bensayah to a “senior Al Qaeda facilitator.”

The case against the six men has become an example of the Bush administration’s pattern of changing strategy in its legal defense of Guantánamo.

In 2002, Mr. Bush made the accusations against the six men a showcase. He said in his State of the Union address that they had been planning a bomb attack on the American Embassy in Sarajevo, Bosnia. But last month, Justice Department lawyers said they were no longer relying on those accusations.

The Guantánamo habeas corpus cases have moved slowly despite a directive by the Supreme Court that judges should act quickly after nearly seven years of detention for many of the 250 men still held in Guantánamo.

J. Wells Dixon, a detainees’ lawyer at the Center for Constitutional Rights, said the ruling made clear that Guantánamo had failed. But, he said, “Justice comes too late for these five men.”

This week, the Justice Department filed motions seeking to stop more than 100 of the other Guantánamo habeas corpus cases from proceeding. Department lawyers argued that there were flaws in the ground rules for the Guantánamo cases that would require the government to reveal classified evidence.

Last month, another federal judge in Washington, Ricardo M. Urbina, ordered the release of 17 ethnic Uighur detainees from China. But Judge Urbina did not hold a hearing on the evidence because the government conceded that the men were not enemy combatants, and said it was continuing to hold the Uighurs because it could not find a country willing to accept them.

The Justice Department is appealing Judge Urbina’s ruling. Arguments are scheduled for Monday in the United States Courts of Appeals in Washington.

Americans have watched in horror as President Bush has trampled on the Bill of Rights and the balance of power. The list of abuses that President-elect Barack Obama must address is long: once again require the government to get warrants to eavesdrop on Americans; undo scores of executive orders and bill-signing statements that have undermined the powers of Congress; strip out the unnecessary invasions of privacy embedded in the Patriot Act; block new F.B.I. investigative guidelines straight out of J. Edgar Hoover’s playbook.

Those are not the only disasters Mr. Obama will inherit. He will have to rescue a drowning economy, restore regulatory sanity to the financial markets and extricate the country from an unnecessary war in Iraq so it can focus on a necessary war in Afghanistan.

Even with all those demands, there is one thing Mr. Obama must do quickly to begin to repair this nation’s image and restore its self-respect: announce a plan for closing Mr. Bush’s outlaw prison at Guantánamo Bay.

The prison is the premier example of the disdain shown by Mr. Bush and Vice President Dick Cheney for the Constitution, federal law and international treaties. Most sensible governments cannot see past Guantánamo to even recall America’s long history as a defender of human rights and democratic values.