Home Resources Books Bush and Cheney: How They Ruined America

WAS AMERICA’S RESPONSE TO THE 9/11 ATTACKS AT THE ROOT OF TODAY’S INSTABILITY AND TERROR?

The events of September 11, 2001, set off a chain of global crises and civil perils that have normalized a climate of fear and conflict. Starting with assaults on the U.S. Constitution, Griffin reviews various ways in which the world has been made worse over the past fifteen years by the Bush-Cheney reaction to the attacks and by power plays for global influence enabled by 9/11. These include the disastrous effects of regime-change operations in

Afghanistan, Iraq, and Libya; the war on terror, the rise of ISIS, the Syrian conflict and European refugee crisis; the explosion of Islamophobia and the American acceptance of extrajudicial murder-by-drone; and the growing existential threats of ecological and nuclear holocaust. Looking back, it is clear that the story of 9/11 has been used to legitimize and manufacture support for disastrous policies.

In Bush and Cheney, Griffin analyzes what Noam Chomsky, Paul Craig Roberts, and many others across the political spectrum consider the most serious threat today the threat to global survival. He argues that ripple effects of 9/11 have become so destructive and dangerous that the press, policy elites, and citizens should finally confront what we have allowed to happen. A national reckoning has become essential, in the words of William Rivers Pitt, to stop the dominoes of September from continuing to fall.

“In this devastating critique of the enduring harm done by the Bush-Cheney presidency, David Ray Griffin provocatively links an informed account of American foreign policy failures to a definitive critique of the official version of the 9/11 attacks. All who regard themselves as responsible citizens should expose themselves to Griffin’s arguments set forth lucidly, persuasively, and imaginatively in this indispensable book.”–Richard Falk, Emeritus Professor of International Law, Princeton University

“If you believe that the willful destruction of the American Constitution warrants a serious debate, the new finely-researched book by Griffin is required reading.”–F. William Engdahl, author of The Lost Hegemon: Whom the Gods Would Destroy

“This book lays out our unspeakable history from Bush and Cheney through Obama into the Trump administration, and how we now teeter on the edge of nuclear and ecological holocaust. Is the most critical origin of our terminal plight the transparent lie of 9/11? It is exposed here brilliantly by Griffin, who tells the truth needed for human survival.”–James W. Douglass, author of JFK and the Unspeakable

Bush and Cheney: How They Ruined America and the World

How the Bush-Cheney Administration Ruined America and the World 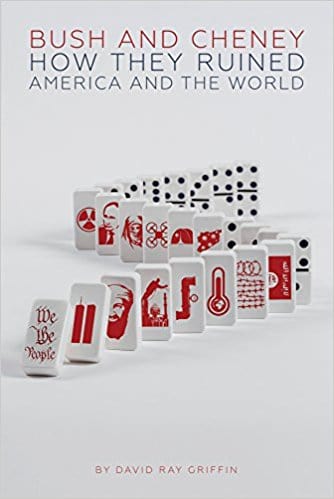 Hitler called himself an artist. George Bush is now a practicing artist. Good God how art can kill. This idea was reinforced when I read David Ray Griffin’s Bush and Cheney. And now that I have, guess I could call it a retelling of Pandora’s Box with the Middle East portraying the evils of that area benevolently contained by the Box while the fulminator of those evils can be titled the greatest lover of freedom in the history of the US. This is a book to wake up Americans, to look at the world with open eyes and have all to know who they represent. It is now time to grow up! Ed Asner

“Contrary to popular opinion, America did not abruptly turn ‘Orwellian’ once Donald Trump set up his business in the White House. Although the nightmarish transformation arguably started on November 22, 1963, it was completed decades later by the Bush-Cheney administration, using 9/11 to make this roughly democratic nation unmistakably like Orwell’s Oceania. . . . Griffin’s brilliant book describes how Bush and Cheney pulled that off and how Barack Obama continued it.”–Mark Crispin Miller, Professor of Media, Culture & Communication at New York University; author of Fooled Again: The Real Case for Electoral Reform.

“The United States and the world have changed in fundamental ways – entirely for the worse – since the events of September 11, 2001. In his new book, Griffin clarifies why this has happened, as well as why the official explanation of 9/11 could not possibly be true. If one is to read only one book to understand the world in which we now live, it should be this immensely important book.”–John V. Whitbeck, International Lawyer; author of The World According to Whitbeck

“In his latest book, Griffin meticulously documents how 9/11 may have provided a pretext to carry out pre-existing plans for the invasion of Afghanistan and Iraq. Griffin takes us back to Bernard Lewis’ framing of ‘Muslim rage’ as the perfect rationale to characterize its hatred of the West as irrational. Griffin discusses Cheneyism as anti-constitutional authoritarianism, a state of permanent war, and aggressiveness toward adversaries, especially Russia. Griffin also documents how Bush-Cheney created the conditions for ISIS. A must read.”–Pepe Escobar, Editor-at-Large, Asia Times, author of Empire of Chaos

“Griffin has cogently explained the events and agendas that shaped the Bush-Cheney years. These events are as relevant today as ever, partly because they derailed the Obama era. Just as Bush-Cheney influence over domestic and foreign policy frustrated Obama supporters, today this influence frustrates Trump supporters who voted for an outsider to ‘take back Washington’ and give us a respite from perpetual warfare. A timely and necessary read.”–Karen Kwiatkowski, PhD, Lt Col USAF (ret), Office of Secretary of Defense 2000-2003

“When I was in the House of Representatives, I introduced Articles of Impeachment against George W. Bush, Dick Cheney, and Condoleezza Rice, because they lied about the events of 9/11 and took our country into what has become an interminable war. In this book, Griffin pulls the covers off the cover-up. As a nominal Catholic, I’m supposed to believe in miracles; but I will never believe in the Bush-Cheney-Rice miracles outlined by Griffin. Those “miracles” were crimes orchestrated by neocons. Will Trump bend to the neocons, as did Obama? For newly-awakened global citizens, this is a must-read primer on why the world has gone so wrong since 11 September 2001.”–Cynthia McKinney, former US Congresswoman, recent Ph.D.

“Bush and Cheney is a study of the successful efforts of ‘Neoconservative’ forces to take over US foreign policy in order to create a global empire, using the 9/11 attacks as a key lever. Griffin demonstrates that this Neocon agenda has shredded the US constitution and produced a foreign policy that is immoral, criminal, and quite literally insane. Griffin also shows how some of its worst policies were continued under Obama. As a result, the United States has become the most serious threat to life on our planet.”–E. Martin Schotz, author of History Will Not Absolve Us: Orwellian Control, Public Denial, & the Murder of President Kennedy

“Given Upton Sinclair’s definition of fascism (‘capitalism plus murder’), Griffin’s extraordinarily well-researched book on the lies and crimes of the Bush-Cheney administration leads to an obvious conclusion: ‘American Interests,’ as promoted by neocons, constitute the obliteration of democratic principles, the rule of law, and hope for the future.”–Robert Shetterly, artist, founder of Americans Who Tell the Truth

“Sadly, this book is necessary, because US press won’t cover the facts. From the first, Griffin contributed his scholarship (and his career!) to unmasking the Bush-Cheney administration for what it was. His latest account nails down a full indictment.”–Josh Mitteldorf, National Institute of Biological Science (Beijing), Senior Editor of OpEdNews, and author of Cracking the Aging Code

“A clear and non-sensationalist presentation of the historical and scientific facts, by one of our generation’s most cogent thinkers. This book should convince any honest and objective person – with a political and scientific I.Q. above room temperature – that we have been systematically lied to about the events of 9/11 and the American invasions in the Middle East.”–Daniel Sheehan, Visiting Professor of Constitutional Law, UC Santa Cruz, and Chief Counsel to the U.S. Jesuit Headquarters’ National Office of Social Ministry

“Drawing upon his authoritative grasp of the big picture, Griffin cuts through the lies, deceptions and propaganda that have paralyzed the minds of so many. From 9/11 and the ensuing regime-change wars, to the terrifying dangers now posed by climate change, this work is an essential wake-up call.”–Piers Robinson, Chair in Politics, Society and Political Journalism, University of Sheffield