According to a story in Friday’s New York Times, Vice-President Cheney advocated in 2002 for the Bush administration to send military troops to Buffalo to arrest the so-called Lackawanna Six as enemy combatants.

This would have violated both Fourth Amendment guarantees against search and seizure without probable cause and the Posse Comitatus Act of 1878, which makes it illegal to use the military for law enforcement. 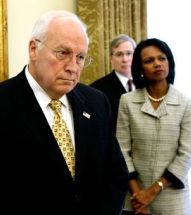 Despite those prohibitions, Cheney argued that the president did have the power to use the military on US soil, citing an October 23, 2001 Justice Department memorandum co-authored by John Yoo which claimed that presidential power extended to the domestic use of the military as long as it served a national security purpose.

The Lackawanna Six were a group of young Yememi-Americans who had attended an al Qaeda training camp in 2001. They were arrested in September 2002, and President Bush bragged of having broken their “cell” in his January 2003 State of the Union address.

However, an investigation by Salon failed to turn up any evidence that they were actually a “sleeper cell” or that they had been planning any kind of violent attack. Most of them were convicted merely of providing material aid to terrorists.

According to Salon, all six were very ordinary young men who had been led to believe they were traveling to Afghanistan for religious studies. The evidence against them was tenuous — which was one reason Cheney pressed for them to be held as enemy combatants instead of being arrested — and many of their Muslim neighbors told Salon they believed the entire case against them was a scam.

The October 2001 Yoo memorandum was declassified last March, but the accounts given to the Times by anonymous Bush administration officials are the first indication that there was serious consideration of actually using it.

The full registration-restricted Times story can be read here.

Law enforcement and intelligence agencies in the United States and abroad are preparing to go on high alert as part of a massive terrorism prevention exercise — the first of its kind here.

Beginning Monday, security officials at all levels in the United States and four other countries will scramble into action in the wake of a fictional terrorist attack somewhere outside the United States.

The scenario envisions the receipt of intelligence that a follow-up attack is planned inside the United States, forcing agencies inside and out of the country to test their coordination, intelligence and terror prevention skills.

The National Level Exercise 2009 “will be the first major exercise conducted by the United States government that will focus exclusively on terrorism prevention and protection, as opposed to incident response and recovery,” the Federal Emergency Management Agency (FEMA) said in a statement.

The US government regularly carries out preparedness exercises, dealing with crises ranging from natural disasters to terrorist attacks.

The 2009 exercise will include agencies in Britain, Mexico, Canada and Australia, as well as federal, regional, state, tribal, local and private sector officials throughout the United States, the Department of Homeland Security said.

“Coordinating with our partners across the United States and around the world is critical to protecting the nation from terrorists attacks,” said Homeland Security Secretary Janet Napolitano.

“The National Level Exercise allows us to test our capabilities in real-time to refine and strengthen our strategies for preventing terrorist attacks.”

The exercise is expected to last for five days and is being designed to test a variety of “capabilities,” including intelligence sharing, counter-terrorism investigation, border security, infrastructure protection, security alerts and international coordination, FEMA said.

“Lessons learned from the exercise will provide valuable insights to guide future planning for securing the nation against terrorist attacks, disasters, and other emergencies,” the emergency response agency said.