Home Consequences For the First Time, New York Links a Death to 9/11 Dust

New York City’s chief medical examiner, Dr. Charles S. Hirsch, has for the first time directly linked a death to exposure to dust from the destruction of the World Trade Center.

In a letter made public yesterday, Dr. Hirsch said that he was certain “beyond a reasonable doubt” that dust from the twin towers contributed to the death of Felicia Dunn-Jones, 42, a civil rights lawyer who was engulfed on Sept. 11 as she ran from her office a block away from the trade center.

She later developed a serious cough and had trouble breathing, and she died five months after the terrorist attack.

Dr. Hirsch said he had decided to amend Mrs. Dunn-Jones’s death certificate to indicate that exposure to trade center dust “was contributory to her death.” The manner of death will be changed from natural causes to homicide.

Her name will be added to the official list of World Trade Center victims, and the official number of people who died as a result of the attack on the twin towers will be increased to 2,750.

By making a formal connection between Mrs. Dunn-Jones’s death and her relatively brief exposure to the dust, the medical examiner’s decision could have a wide impact on how the city deals with the growing number of illnesses and deaths linked in some way to ground zero. 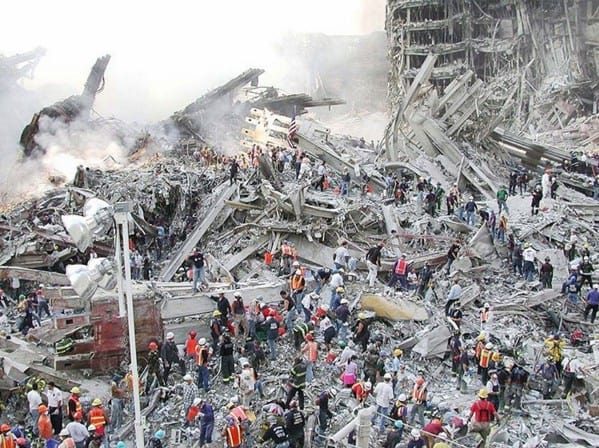 The city is already under pressure to re-examine the deaths of people like James Zadroga, 34, a New York police detective who worked at the debris pile in the months after the towers fell. Although a New Jersey pathologist who conducted an autopsy last year concluded that Detective Zadroga’s death was linked to trade center dust, city officials have not accepted that finding.

“The city medical examiner has now accepted what thousands of people with 9/11-related illnesses and their doctors have long understood: that ground zero dust was harmful and even deadly,” said Representative Carolyn B. Maloney.

She and Representative Vito J. Fossella, both of New York, had appealed to Dr. Hirsch to change his original decision on Mrs. Dunn-Jones. Ms. Maloney urged Dr. Hirsch yesterday to review other cases of people who died after being exposed to the dust. The medical examiner’s office said it had no plans to undertake such a review.

But the New York State Department of Health, with financial assistance from the National Institute for Occupational Safety and Health, has already started to study deaths among rescue and recovery workers and volunteers who responded to the trade center disaster.

The medical examiner’s decision also could be cited as supporting evidence in the federal lawsuits filed against the city by thousands of firefighters, police officers and recovery workers who say they were injured by breathing the dust during the 10-month cleanup.

“This will bring us some closure, but hopefully it will also open doors for others to get the medical compensation they need,” Joseph Jones, Mrs. Dunn-Jones’s husband, said in a telephone interview.

Mrs. Dunn-Jones was covered in ash laced with asbestos and other hazardous material as she ran from her office and made her way home to Staten Island.

After she died on Feb. 10, 2002, an autopsy showed that Mrs. Dunn-Jones had sarcoidosis, which produces microscopic lumps called granulomas on vital organs and is often associated with exposure to environmental hazards.

Her husband later filed a claim with the federal Sept. 11 Victim Compensation Fund, which concluded the disease was linked to the dust and awarded the family $2.6 million.

Mrs. Dunn-Jones’s name was engraved on the Sept. 11 memorial in Staten Island. But when Mr. Jones tried to have her name added to the official list of Sept. 11 victims, Dr. Hirsch’s office rejected the request in 2004, saying there was insufficient proof.

Richard H. Bennett, a lawyer representing the Jones family, continued to collect evidence and press the medical examiner to reconsider. Mr. Bennett said that in March he prepared a file containing more than 400 pages of reports and medical studies showing the effects of exposure to the dust.

Among the reports was one published this month in a medical journal showing a sharp increase in the number of cases of sarcoidosis among New York City firefighters in the first two years after Sept. 11.

In a letter to Mr. Bennett on Friday, Dr. Hirsch said that “accumulating evidence indicates that in some persons exposure to W.T.C. dust has caused sarcoidosis or an inflammatory reaction indistinguishable from sarcoidosis.”

Dr. Hirsch indicated in the letter that he still doubted that Mrs. Dunn-Jones’s sarcoidosis was caused by exposure to the dust.

He cited detailed medical information from the autopsy on Mrs. Dunn-Jones that showed scars on her heart muscle — the kind that would be caused by sarcoidosis — that had probably been there since before Sept. 11.

Despite having reservations about when the disease began, Dr. Hirsch said in the letter that “whether or not she had sarcoidosis prior to 9/11/01, it is likely, with certainty beyond a reasonable doubt, that exposure to W.T.C. dust was harmful to her.”

Experts agree that even brief exposure to dust could aggravate the pre-existing sarcoidosis.

“Sarcoidosis in general is usually a disorder of years, but sometimes it goes undiagnosed,” said Dr. Ronald G. Crystal, chief of the division of pulmonary and critical care medicine at NewYork-Presbyterian/Weill Cornell hospital. “Then the conditions are recognized, and people die in a few months.”

Dr. Crystal said that some people are more genetically predisposed to sarcoidosis than others, but it remains a relatively rare disease and not one that should concern people who were briefly exposed to the dust.

“If there is going to be a significant increase in sarcoidosis connected with this type of exposure, it would have appeared by now,” Dr. Crystal said.

Clinton called on the city’s chief medical examiner to examine the cases of workers and downtown Manhattan residents whose deaths and illnesses could have been caused by exposure to toxins at the site of the Twin Towers collapse and at the landfill where the wreckage was taken.

This week Chief Medical Examiner Charles Hirsch ruled the death of Felicia Dunn-Jones — a lawyer who ran through the thick clouds of dust as she fled the collapsing towers on September 11, 2001 — was linked to her exposure to the dust. He included her death five months later in the official tally of September 11 victims in New York, which is now 2,750.

Victims’ rights groups said Dunn-Jones is the only victim to have received a death benefit from the Victim Compensation Fund for an illness caused by wreckage of the Twin Towers, which fell after they were struck by two hijacked airlines.

“Your recent decision to include Felicia Dunn-Jones in the official list of 9/11 victims is an important step toward acknowledging and coming to terms with the devastating and growing health impact,” Clinton said in a letter to Hirsch.

“If the toxins at Ground Zero could be responsible for the death of Felicia Dunn-Jones, who was trapped in the dust cloud for one day, think about the impact the toxins must have had on rescue and recovery workers who toiled at the site for months,” Maloney said in a statement.

Marianna Pizzitola, the president of an association for retired emergency services workers, said workers who are suffering from leukemia, post-traumatic stress disorder and other illnesses are looking for “an acknowledgment from the city that their illnesses are real.”

She said emergency workers who have had to miss work due to their illnesses are sometimes not compensated because the city has been reluctant to accept claims that their illnesses were caused by their exposure to the toxic dust, rather than a pre-existing condition or something unrelated to the dust.

New York Democrats in Congress said that $50 million had been set aside for September 11 health needs in a congressional appropriations bill, which awaits the approval of President George W. Bush.