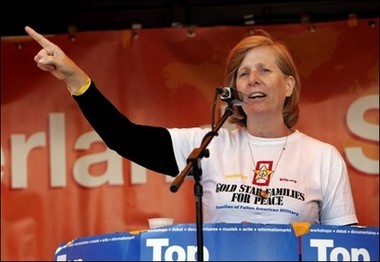 Anti-war icon Cindy Sheehan has gone public on her support for the 9/11 truth movement after she told a radio show that the collapse of the twin towers looked like a controlled demolition and that there should be a new investigation into the terrorist attacks.

Sheehan, who made headlines this week after she distanced herself from the Democratic party and the establishment left, joined Alex Jones to share her views on her skepticism towards the official 9/11 story.

Sheehan said her decision to desert the Democrats was sparked last week when the Iraq war funding bill was passed and it was at this point she realized the Democrats had co-opted her simply to help them regain Congress and that they had no interest in ending the war.

Sheehan attacked Hillary Clinton as a “warhawk and a “warmonger” and said there was very little distinction between her and John McCain or Rudy Giuliani.

On 9/11, Sheehan expressed her support for the Jersey Girl’s petition, which calls for a new independent investigation of the terrorist attacks, slamming the 9/11 Commission Report as a “total travesty and a smokescreen.”

“George Bush and Dick Cheney held hands and testified behind closed doors, not under oath,” said Sheehan, adding, “There are many things that just don’t add up on that day.”

Sheehan questioned why U.S. air defenses were distracted by drills and exercises scheduled for the morning of 9/11 and why standard operating procedure for intercepting errant aircraft was not followed for the first and only time in history.

“When you lose control of an airplane, you intercept it with a military jet and that should only take seconds – from what I understand it’s not even an order to do that it’s mandatory,” said Sheehan.

“I do see some very high profile people saying it was an inside job,” concluded Sheehan.

Click here to listen to Sheehan’s interview on the Alex Jones Show or listen below.