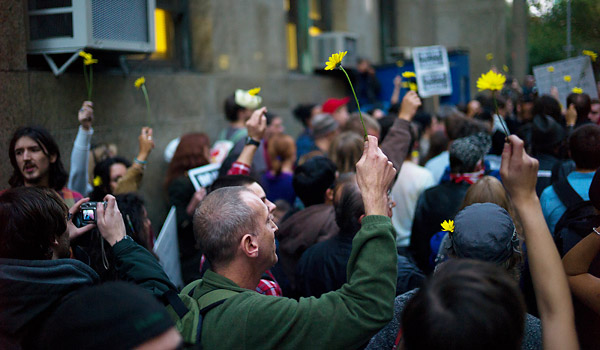 A New York police commander who pepper-sprayed protesters during the opening days of the Occupy Wall Street demonstrations last month faces an internal disciplinary charge that could cost him 10 vacation days, the police said Tuesday.

The commander, Deputy Inspector Anthony Bologna, has been given a so-called command discipline, according to a law enforcement official. Officials said investigators found that the inspector ran afoul of Police Department rules for the use of the spray. The department’s patrol guide, its policy manual, says pepper spray should be used primarily to control a suspect who is resisting arrest, or for protection; it does allow for its use in “disorder control,” but only by officers with special training.

The inspector can accept the charge and plead guilty, or he can opt for a departmental trial. Police Commissioner Raymond W. Kelly is the ultimate arbiter of punishment in such matters and has wide leeway in his decisions.

Inspector Bologna’s actions on Sept. 24, when he sprayed several penned-in women, were captured on video and spread widely on the Internet. It became a defining moment in the protests.

Four days later, Mr. Kelly said the Internal Affairs Bureau would look into the inspector’s actions. At the same time, the Manhattan district attorney’s office opened an investigation. On Monday, one woman who was pepper-sprayed, accompanied by her lawyer, met with prosecutors and urged them to bring criminal charges against the inspector.

Mr. Browne could not immediately say where the commander is now assigned. But Deputy Inspector Roy T. Richter, the head of the Captains Endowment Association, said he was still assigned to the same command.

“Deputy Inspector Bologna is disappointed at the results of the department investigation,” Inspector Richter said. “His actions prevented further injury and escalation of tumultuous conduct. To date, this conduct has not been portrayed in its true context.”

On Tuesday afternoon, a few hundred people marched to the offices of the Manhattan district attorney, Cyrus R. Vance, Jr., calling for him to drop criminal charges against people arrested during the protests.

After leaving the district attorney’s office, about 200 people marched to Skylight Studios on Hudson Street, where Gov. Andrew M. Cuomo received an award from the Huffington Post. The protestors said they wanted the governor to support retention of the so-called millionaire tax.

The feminist author Naomi Wolf, who was among the group, was handcuffed and received a summons for blocking pedestrian traffic, the police said.