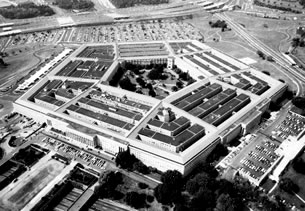 In fiscal 1999, the Department of Defense was “missing” $2.3 trillion dollars. To put that amount of money in perspective, it is approximately 3X what President-elect Obama is proposing to spend to revitalize America.

In fiscal 2000, the Department of Defense was “missing” $1.1 trillion, about 1.5X what President-elect Obama wants to invest in America.

So between October 1998 and September 2000, the Department of Defense was “missing” $3.3 trillion. Because the amount of money disappearing is so enormous, years ago we started a archive of articles on the “missing money” to try to keep up with the trillions sliding out of the federal accounts.

When Mr. Lynn left Defense in 2001, he joined DFI International and then in 2005 became the chief lobbyist for Raytheon.[Original link dead: http://www.raytheon.com/ourcompany/rtnwcm/groups/public/documents/content/bio_lynn.pdf] He was replaced at Defense by Dov Zakheim.

Obama also nominated Robert Hale to Lynn’s former position, Under Secretary of Defense (Comptroller). From 1994 to 2001, Mr. Hale served as the Assistant Secretary of the Air Force (Financial Management and Comptroller). That means that Hale, same as Lynn, was in charge of the money when all the money disappeared.

I guess the guys who got the last $3.3 trillion were pretty happy with Mr. Lynn and Mr. Hale and decided to bring them back.

Which brings me to the question I keep asking, “Where is the money and how do we get it back?“