This is a news item pertaining to the Complete 911 Timeline investigative project, one of several grassroots investigations being hosted on the History Commons website. The data published as part of this investigation has been collected, organized, and published by members of the public who are registered users of this website.

One of the main focuses at the 9/11 Timeline recently has been the destruction of a tape of FAA flight controllers’ recollections. The tape was made at the FAA’s New York Center about an hour and a half after the attacks ended, despite worries about the procedure by a union official and the controllers. However, when New York Center forwarded evidence about the attacks to the FBI the next day, it did not provide the tape , and its existence was not reported to superiors . The controllers then prepared written statements without reviewing the tape , and a union official was concerned whether anyone had heard it. 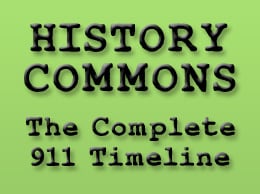 One of the controllers later asked to listen to the taped statement he had made, but his request was denied . When New York Center submitted a formal accident package, the tape was again absent . Although the Center had been told to retain 9/11 evidence , the tape was later destroyed. Following the tape’s destruction, the manager who destroyed it was suspended , but did not face criminal charges. A later Transportation Department report simply attributed the tape’s destruction to “poor judgment.”

There are also a number of new entries about the day of 9/11. The Secret Service learned of additional hijacked aircraft around 9:03 a.m., but the agents protecting Vice President Dick Cheney were apparently not alerted . A National Reconnaissance Office exercise simulating a plane crashing into its building was scheduled to begin around 9:30 a.m., when unidentified planes were flying near the Pentagon. Shortly after 9:40 a.m., the FAA Command Centre updated FAA headquarters about hijacked flight 93 , a National Airborne Operations Center plane launched from Andrews Air Force base, and American Airlines briefly lost contact with a third airliner.

After 9:50 a.m., American Airlines CEO Don Carty questioned Transportation Secretary Mineta about the plane that hit the Pentagon , Northeast Air Defense Sector (NEADS) officers created a battleplan to respond to the attacks, the control tower at Reagan Airport was evacuated due to a report on an approaching aircraft, and numerous international flights began transmitting emergency codes. After 10:00 a.m., NORAD commanders considered a shootdown authorization , but pilots launched from Langley Air Force Base were told they could not shoot down hijacked planes , and NORAD sectors were told peacetime rules of engagement applied .

Finally, alleged lead hijacker Mohamed Atta was supported by a German Foundation with US ties and Robert Fuller, one of the FBI agencies involved in the failed hunt for Khalid Almihdhar, later handled an informer so badly he immolated himself in front of the White House .