Last Wednesday Pepper spoke about all of his projects, including 9/11 truth and prosecuting the Bush administration for war crimes, to a packed celebrity filled house in Los Angeles. Among those in attendance were Ed Asner, Gina Belafonte, Judd Nelson and 9/11 author Professor David Ray Griffin. Videos of his talk follow …

In Part 1 Pepper talks about his background, childhood and motivation. He also speaks about the time he spent in Cuba playing baseball where he got to know Fidel Castro. According to Pepper, Castro foresaw much of what is happening in the United States today:

‘When, in that massive country to the north, the masses of the people ever understand what it is that their ruling class has done to them and is doing to them, there will be such a torrent of opposition. They will rise like never before and then there will be the world’s greatest social revolution, the American second revolution.’

The video concludes with Pepper explaining how he came to work for Robert F. Kennedy and Martin King:

‘Took me ten years to convince myself that [James Earl Ray] was an absolute patsy’ – Dr. William Pepper

In Part 2 Pepper begins with the Martin King assassination and explains how he became involved with James Earl Ray’s defense some nine years later. He also goes into detail about the 30 day civil trial against Loyd Jowers, et al, where a jury found Ray not responsible for King’s assassination after listening to 70 witnesses under oath.

Pepper believes that Ray’s civil trial should serve as a template for getting out the truth in a wide range of cover-ups including the Robert F. Kennedy assassination and 9/11. He thinks using the courts is an effective way to get the truth into the public record despite the efforts by the mainstream media to prevent its dissemination to the public.

‘I found from just a preliminary examination of the record that [the Sirhan Sirhan case] on the law, on the facts of the case, was an easier one than the assassination of Martin King and the innocence of James Earl Ray’ – Dr. William Pepper

In the first half of Part 3 Pepper details the startling evidence that necessitates a second shooter in the assassination of Bobby Kennedy. For starters the medical examiner states that Kennedy was shot four times from the rear including one shot about an inch behind his right ear which conflicts with all the witness testimony that Sirhan was always three to five feet in front of the likely Democratic presidential nominee.

Secondly, the analysis of audio recordings from the assassination with formerly unavailable new technology has led to the determination that 13 shots were fired at the Ambassador Hotel in Los Angeles. Sirhan’s gun only held 8 bullets. In other words:

‘There had to be a second shooter there’ – Dr. William Pepper

In the second half of Part 3 Pepper details the efforts taken by the prison and the Department of Corrections to prevent his legal team from psychoanalyzing Sirhan Sirhan.

In Part 4 Pepper continues the RFK assassination discussion and his efforts to clear Sirhan Sirhan whom he says is innocent:

In addition to the belief in Sirhan’s innocence Pepper believes the case is important because it is representative of a larger problem facing the country:

‘Each of the things I’m talking about are symptomatic of a pervasive sickness in this country. This is not the country we were all led to believe it was or should have been. This is what has emerged because we have had a small group of criminals grab power over a period of time following the orders of the people in the shadows who really do dominate life and justice and the injustices that exist in the society.’ – Dr. William Pepper

‘The 9/11 matter is, in my lifetime, the most traumatic assault on democracy and the safety of this Republic.’ – Dr. William Pepper

Part 5 is dedicated to finding out the truth about 9/11. Pepper supports two different ways for accomplishing this goal. First, he backs an effort to create a new commission to investigate 9/11 by New York state referendum. Volunteers are currently trying to get the necessary 30,000 signatures from registered New York voters to get the measure on the ballot.

The second approach is to once again file a lawsuit in the courts. Pepper is leading this effort on behalf of the Jersey Girls and plans to sue, among others, Ahmed Omar Saeed Sheikh, who is widely believed to have sent $100,000 to lead 9/11 hijacker, Mohammed Atta.

‘I’m determined that what I saw in Vietnam and what is happening in Iraq will not go unpunished. Absolutely determined that that’s the case. What that means is this entire gang of war criminals in Washington are going to have to be prosecuted’ – Dr. William Pepper

Pepper plans to accomplish this monumental task by following the precedent set in the case of Chilean dictator General Augusto Pinochet. In that case, a Spanish judge issued an international arrest warrant for Pinochet whose charges included 94 counts of torture.

Ultimately Pepper hopes for a conviction in absentia of the American war criminals which would prevent the guilty from ever stepping foot outside of the United States.

NOTE: To order a DVD of the night’s entire programming, which includes a lively Q & A session with Dr. William Pepper and a talk by Professor David Ray Griffin on new 9/11 evidence, please contact Kathleen at quantumysticKFR@gmail.com to request a copy. 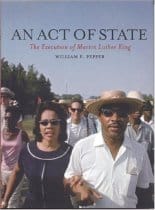 ‘Orders to Kill: The Truth Behind the Murder of Martin Luther King, Jr’ (William F. Pepper)