Syracuse, NY –  On Good Friday, April 14, 2017, nine nonviolent civil resisters of Upstate Drone Action were arrested at the main entrance of Hancock Air National Guard Base witnessing against extrajudicial drone killings perpetrated from the base.

Three people hung on large drone crosses representing victims of US drone strikes in seven majority Muslim countries. Eleven others held smaller drone crosses headed by the phrase, DRONES CRUCIFY, each followed by one of these: Children, Families, Love, Peace, Community, the US Constitution, UN Charter, Rule of Law, US Treaties, Due Process, or Diplomacy.

The Good Friday Hancock Drone Action Statement reads, in part, “Good Friday commemorates the crucifixion of Jesus. Recognizing that 70% of our nation identify as Christian, we come to the gates of the Hancock drone base to make real the crucifixion today. As Jesus and others were crucified by the Roman Empire, drones are used by the U. S. Empire in a similar fashion. In Roman times, crosses loomed over a community to warn people that they could be killed whenever the Empire decided. So, too, our drones fly over many countries threatening extrajudicial killings upon whoever happens to be in the vicinity. On this Good Friday, we recall Jesus’ call to love and nonviolence. We’re asking this Air Force base and this nation to turn away from a policy of modern-day crucifixion.” 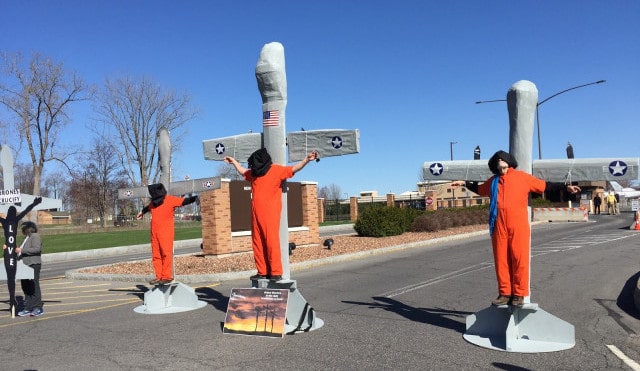 The 14 “Stations of the Drone-Cross” were confiscated by base personnel.

Hancock Air Base is located on the backside of Syracuse International Airport. It hosts the 174th Attack Wing of the NY Air National Guard – the MQ9 Reaper drone hub. It is also the national Reaper maintenance-training center. The MQ9 Reaper is a robotic, satellite-linked, remote assassin drone. Hancock is currently one of 20 U.S. drone-warfare bases across the U.S., Germany, Australia, Italy, the U.K. and elsewhere. The “Drone Papers”—based on a leak by an internal military whistleblower – show that during a five-month period in 2015, 90% of all drone victims were bystanders, including children.

The civil resistance action is the latest chapter in Upstate Drone Action’s seven-year nonviolent campaign to expose the war crimes in which Hancock AFB plays a role. This resistance against drones is linked to the worldwide effort to ground killer drones and end all U.S. wars. Since 2010 there have been over 170 arrests at Hancock of those witnessing against the grim Reapers.

THOSE ARRESTED on April 14:

National Bird follows the dramatic journey of three whistleblowers who are determined to break the silence around one of the most controversial current affairs issues of our time: the secret U.S. drone war. At the center of the film are three U.S. military veterans. Plagued by guilt over participating in the killing of faceless people in foreign countries, they decide to speak out publicly, despite the possible consequences.

Their stories take dramatic turns, leading one of the protagonists to Afghanistan where she learns about a horrendous incident. But her journey also gives hope for peace and redemption. National Bird gives rare insight into the U.S. drone program through the eyes of veterans and survivors, connecting their stories as never seen before in a documentary. Its images haunt the audience and bring a faraway issue close to home.

Get more information about the film and go to an upcoming screening.