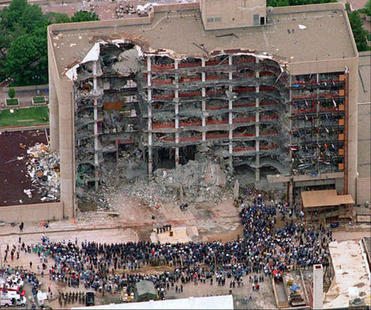 This file photo taken May 5, 1995, shows thousands of search and rescue crews attending a memorial service in front of the Alfred P. Murrah Federal Building in Oklahoma City. A Utah attorney is seeking security tapes from the the bombing scene as part of his unofficial inquiry into the explosion that killed 168 people and injured hundreds more. Jesse Trentadu already received more than two dozen tapes from security cameras on the buildings around the Federal Building, but he claims the FBI edited portions of them.

SALT LAKE CITY — A federal judge on Wednesday continued to question the FBI’s explanation for not producing videotapes associated with the 1995 Oklahoma City bombing that a Salt Lake lawyer has sought for nearly six years.

“It’s quite astounding that documents as important as these went missing and the FBI says, ‘Well, they’re gone,'” U.S. District Judge Clark Waddoups said during a motion hearing.

At issue is whether the FBI adequately responded to Jesse Trentadue’s Freedom of Information Act request for footage of Timothy McVeigh parking a truckload of explosives at the Alfred P. Murrah Federal Building on April 19, 1995. Specifically, the Salt Lake attorney is after a building surveillance tape and dashcam video from the Oklahoma state trooper who stopped McVeigh 90 minutes after the explosion that killed 168 people.

The FBI has submitted several declarations from its top records manager to show the agency has searched electronic databases and evidence warehouses without success. But Waddoups said the declarations lack credibility because they do not include firsthand knowledge or details about who, when, where or how the searches were conducted.

“That’s not good evidence,” he said.

Waddoups delayed ruling on the FBI’s motion to dismiss the case and allowed the agency until June 15 to provide a more complete explanation of the searches.

“This is a matter of significant public interest,” the judge said, adding it’s time for it to be resolved.

U.S. Department of Justice attorney Kathryn Wyer argued the FBI has conducted a search in this case using procedures other courts have recently upheld as reasonable. Trentadue essentially wants to use his FOIA request as a search warrant, which goes beyond the scope of the law, she said.

Trentadue contends the FBI has acted in bad faith by not providing the videotapes he has sought since December 2006.

Wyer said Trentadue has not produced any evidence that the tapes exist. Trentadue counters that the FBI hasn’t shown that they don’t exist.

Trentadue began looking into the bombing after his brother, Kenneth Trentadue, died at the Oklahoma City Federal Transfer Center in August 1995. Kenneth Trentadue was a convicted bank robber who was taken to the federal prison after violating probation in San Diego in June 1995.

Jesse Trentadue alleges guards mistook his brother for a bombing suspect and beat him to death during an interrogation.

He said after all these years he thought public interest in the case would wane. “But that doesn’t appear to be the case. It grows and grows.”