Many details of the case have been known, but newly released FBI documents
paint a fuller portrait of Dr. Bruce Ivins as a troubled scientist whose career
was teetering toward failure at the time the letters were sent. As the U.S.
responded to the mailings, his work was given new importance by the government
and he was even honored for his efforts on anthrax.

The documents also describe what investigators say was Ivins’ bizarre, decades-long
obsession with a sorority. The letters were mailed from a mailbox near the sorority’s
office in Princeton, N.J.

The anthrax letters were sent to lawmakers and news organizations as the nation
reeled in the aftermath of the Sept. 11, 2001, terror attacks. Postal facilities,
Capitol buildings and private offices were shut down for inspection and cleaning
by workers in hazardous materials “space suits” from Florida to Washington
to New York and beyond.

The FBI and Justice Department announced the decision closing the case while
disclosing reams of evidence collected in the case. Officials also released
a nearly 100-page summary of their findings.

The document said Ivins made comments to a former colleague that showed “immediately
prior to the anthrax letter attacks, his life’s work was in jeopardy.”

Ivins killed himself in 2008 as prosecutors prepared to indict him for the
attacks. He had denied involvement, and his family and some friends have continued
to insist he was innocent.

Authorities say Ivins’ death capped a years-long cat-and-mouse game with investigators,
in which he repeatedly offered to help the FBI catch the killer, cast suspicion
on his colleagues and tried numerous forms of subterfuge.

Authorities tried to build a case against biowarfare expert Steven Hatfill,
but ultimately turned away from that and had to pay him a multimillion-dollar
settlement.

After the attacks, the FBI relied heavily on Ivins’ help, according to the
documents, and the scientist offered agents his notebooks, his office, and his
e-mail.

He passed a polygraph in connection with the investigation in 2002, but investigators
learned years later that he had been prescribed psychotropic medications at
the time. Examiners who reassessed the results concluded that Ivins exhibited
classic signs of the use of countermeasures to pass a polygraph. 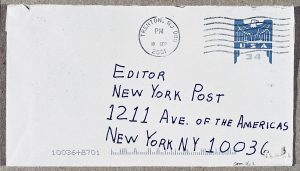 Investigators believe Ivins’ use of the letters was part of a secret code that
had two possible meanings: pointing to a colleague, or stating a specific dislike
of New York. Two of the letters were sent to New York — one to The New
York Post, and another to NBC’s then-anchor Tom Brokaw.

The anthrax case was one of the most vexing and costly investigations in U.S.
history. Officials announced in 2008 that the lone suspect was Ivins. The move
Friday seals that preliminary investigative conclusion.

Laced with anthrax, the letters were sent with childish, blocky handwriting
and chilling scientific expertise.

The spores killed five people: Two postal workers in Washington, D.C., a New
York City hospital worker, a Florida photo editor and a 94-year-old Connecticut
woman who had no known contact with any of the poisoned letters. Seventeen other
people were sickened.

For years, the FBI chased leads but filed no charges.

In 2008, the agency announced that the mystery had been solved but the suspect
was dead.

Authorities said that in the days before the mailings, Ivins had logged unusual
hours alone in his lab at the Army Medical Research Institute of Infectious
Diseases at Fort Detrick, Md. They also said he threw investigators off his
trail by supplying false leads as he ostensibly tried to help them find the
killer.

As the FBI closed in on Ivins, the 62-year-old microbiologist took a fatal
overdose of Tylenol, dying on July 29, 2008. After Ivins’ suicide, FBI Director
Robert Mueller said the investigation found he was the culprit, and prosecutors
said they were confident he acted alone.

Skeptics — including prominent lawmakers — pointed to the bureau’s
long, misguided pursuit of Hatfill, and noted there was no evidence suggesting
Ivins was ever in New Jersey when the letters were mailed there.

At the urging of lawmakers, the National Academy of Sciences has launched a
formal review [Ed. note: Information
on review here] of the FBI’s scientific methods in tracing the particular
strain of anthrax used in the mailings to samples Ivins had at his Fort Detrick
lab.