“During calendar year 2012, the Government made 1,856 applications to the Foreign Intelligence Surveillance Court for authority to conduct electronic surveillance and/or physical searches for foreign intelligence purposes.”

That somewhat opaque statistic was disclosed in the Justice Department’s latest annual report to Congress on the Foreign Intelligence Surveillance Act, filed on Tuesday. As is usually the case, none of the requests for electronic surveillance were denied by the Court.

No matter how it is sliced and diced, the newly disclosed number of applications does not yield much substance. It means that the government submitted an average of 5 requests per day last year for intelligence surveillance or physical search. It is about 5% higher than the number of applications the year before (1,745), but quite a bit lower than the figure from 2007 (2,371).

The number of applications does not correspond directly to the number of targets, since multiple applications may be submitted in the course of an individual investigation. Nor is the outcome of the surveillance or search activity indicated in a way that would tend to validate or invalidate the authorization after the fact. 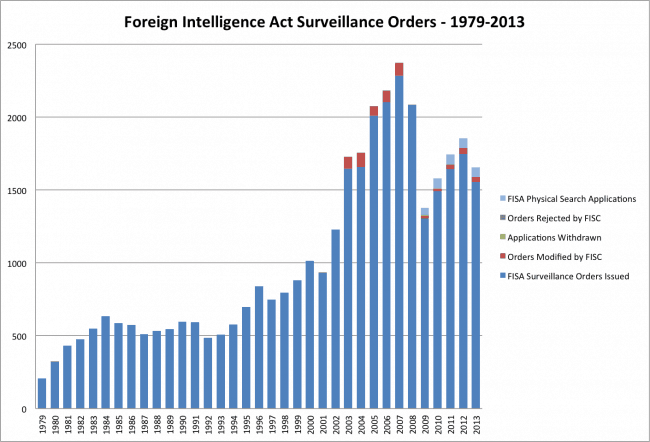 In any case, the FISA Court did not deny any of the government’s requests for authority to conduct electronic surveillance in whole or in part, the report said, although unspecified modifications were made to 40 proposed orders. The report does not say whether or not any requests for physical search were disapproved or modified.

The government also made 212 applications for access to business records and “tangible things” for foreign intelligence purposes, almost the same as the 205 the year before.

As an instrument of public oversight, the annual reports on FISA are only minimally informative. They register gross levels of activity, but they provide no measures of quality, performance or significance. Neither counterintelligence successes nor failures can be discerned from the reports. Nor can one conclude from the data presented that the FISA process is functioning as intended, or that it needs to be curbed or refined.

Congressional leaders blocked efforts to impose new or stronger public reporting requirements when the FISA Amendments Act was reauthorized late last year. However, Sen. Jeff Merkley and several Senate colleagues asked the FISA Court to summarize its opinions in such a way as to facilitate their eventual declassification and disclosure. This request has produced no known results to date.

The FISA itself is a product of a rich period of political ferment in the 1970s when public and private institutions converged to promote increased transparency, improved oversight and meaningful new constraints on government authority. Investigative journalists wrote groundbreaking stories, Congressional committees held historic hearings, political activists and ordinary citizens mobilized to defend their interests, leading to real and lasting changes. On the legislative front, these included passage of an invigorated Freedom of Information Act, along with the Privacy Act, the Government in the Sunshine Act, and the FISA, which subjected intelligence surveillance activities to at least a degree of independent judicial review.

An interesting account of that momentous period can be found in the new book Reining in the State: Civil Society and Congress in the Vietnam and Watergate Eras by Katherine A. Scott, University Press of Kansas, March 2013.

Secrecy News from the FAS Project on Government Secrecy