More than 350 never-before-seen photographs of then-President George W. Bush and then-Vice President Dick Cheney on Sept. 11, 2001, have been released after a Boston-based documentary producer’s Freedom of Information (FOIA) request.

The photos show officials’ grim reactions as the events of 9/11 unfolded, and include meetings in the president’s Emergency Operations Center, as well as Cheney traveling to Camp David.

The photos came as part of a FOIA request from Colette Neirouz Hanna, coordinating producer for Kirk Documentary Group, which makes films for PBS’s “Frontline.”

In an email Friday night, Hanna said it was important for the public to see the photographs.

“From the first moments after the attacks on the World Trade Center, Vice President Cheney has been at the center of much of the government’s response,” she wrote. “We knew he had a photographer assigned to take pictures of almost everything he did and have been trying to obtain those pictures — from inside the secret bunker under the White House to the ‘undisclosed secure locations’ where he spent the weeks after September 11, 2001. Now, 14 years later we finally have those photographs and the American people can see for themselves what took place in those first 24 hours.”

She said the photos have been captioned on the “Frontline” website “so Americans can finally see what happened with the Vice President during those important hours after 9/11.”

Hanna said that the Cheney Vice Presidential records became available to a FOIA request on January 20, 2014.

“I knew of the date of their availability and was literally the second person to have submitted a FOIA request to the Cheney archive for materials,” she wrote.

The first batch of images was released on June 19, 2015. The remaining trove were released July 24, which included the requested images from September 11, 2001.

She said “Frontline” is not doing a specific project with the images for now, “but will use them for future film projects on the topic and may even use them to re-edit past films we’ve produced about the Bush administration (such as, Bush’s War, Cheney’s Law, and The Dark Side) — to make them more vivid with these photographs.”

The full range of photos is available on the US National Archives’ flickr page. 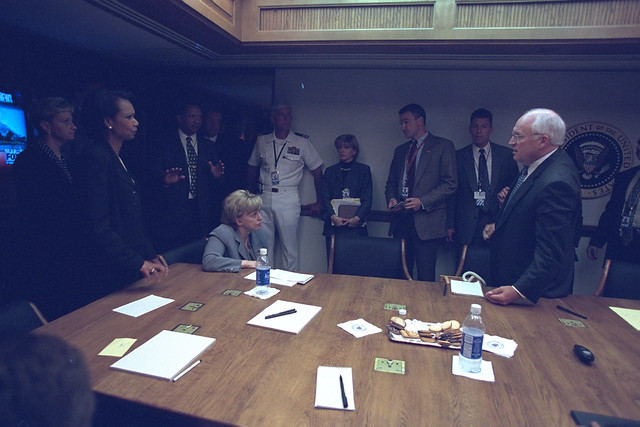 Below is a sampling of the images released: