Courtesy of The Muckraker Report

June 6, 2006 — This past weekend, a thought provoking e-mail circulated through Internet news groups, and was sent to the Muckraker Report by Mr. Paul V. Sheridan (Winner of the 2005 Civil Justice Foundation Award), bringing attention to the FBI’s Most Wanted Terrorist web page for Usama Bin Laden.[1] (See bottom of this web page for Most Wanted page) In the e-mail, the question is asked, “Why doesn’t Usama Bin Laden’s Most Wanted poster make any direct connection with the events of September 11, 2001?” The FBI says on its Bin Laden web page that Usama Bin Laden is wanted in connection with the August 7, 1998 bombings of the United States Embassies in Dar es Salaam, Tanzania, and Nairobi, Kenya. According to the FBI, these attacks killed over 200 people. The FBI concludes its reason for “wanting” Bin Laden by saying, “In addition, Bin Laden is a suspect in other terrorists attacks throughout the world.”

Surprised by the ease in which this FBI spokesman made such an astonishing statement, I asked, “How this was possible?” Tomb continued, “Bin Laden has not been formally charged in connection to 9/11.” I asked, “How does that work?” Tomb continued, “The FBI gathers evidence. Once evidence is gathered, it is turned over to the Department of Justice. The Department of Justice than decides whether it has enough evidence to present to a federal grand jury. In the case of the 1998 United States Embassies being bombed, Bin Laden has been formally indicted and charged by a grand jury. He has not been formally indicted and charged in connection with 9/11 because the FBI has no hard evidence connected Bin Laden to 9/11.” 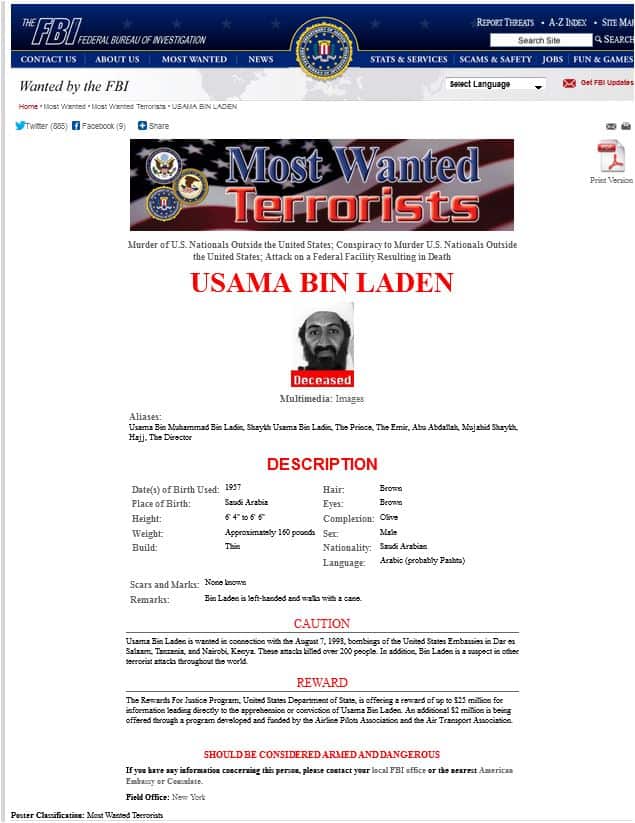 Sibel Edmonds Must be Heard