BLOGGED BY Brad Friedman ON 10/29/2007 5:30AM
EXCLUSIVE: FBI Whistleblower Sibel Edmonds Will Now Tell All – and Face Charges if Necessary – to Any Major Television Network That Will Let Her; She’s Prepared to Name Names, Including Those of Two ‘Well-Known’ Congress Members Involved in Criminal Corruption The ‘Most Gagged Person in U.S. History’ Tells The BRAD BLOG She’s Now Exhausted All Other Channels…

Attention CBS 60 Minutes: we’ve got a huge scoop for you. If you want it.

Remember the exclusive story you aired on Sibel Edmonds, originally on October 27th, 2002, when she was not allowed to tell you everything that she heard while serving as an FBI translator after 9/11 because she was gagged by the rarely-invoked “States Secret Privilege”? Well, she’s still gagged. In fact, as the ACLU first described her, she’s “the most gagged person in the history of the United States of America.”

But if you’ll sit down and talk with her for an unedited interview, she has now told The BRAD BLOG during an exclusive interview, she will now tell you everything she knows. 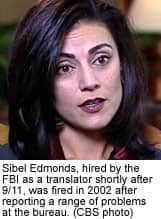 Everything she hasn’t been allowed to tell since 2002, about the criminal penetration of the FBI where she worked, and at the Departments of State and Defense; everything she heard concerning the corruption and illegal activities of several well-known members of Congress; everything she’s aware of concerning information omitted and/or covered up in relation to 9/11. All of the information gleaned from her time listening to and translating wire-taps made prior to 9/11 at the FBI.

Here’s a handy bullet-point list, as we ran it in March of 2006, for reference, of what she’s now willing to tell you about.

“People say, ‘why doesn’t she just come forward and spill the beans?’ I have gone all the way to the Supreme Court and was shut down, I went to Congress and now consider that shut down,” she told The BRAD BLOG last week when we spoke with her for comments in relation to our story on former House Speaker Dennis Hastert’s original attempt to move a resolution through the U.S. House in 2000 declaring the 1915 massacre of 1.5 million ethnic Armenians in Turkey as “genocide.”

“Here’s my promise to the American Public: If anyone of the major networks — ABC, NBC, CBS, CNN, MSNBC, FOX — promise to air the entire segment, without editing, I promise to tell them everything that I know,” about everything mentioned above, she told us.

“I can tell the American public exactly what it is, and what it is that they are covering up,” she continued. “I’m not compromising ongoing investigations,” Edmonds explained, because “they’ve all been shut down since.”

She has, in fact, spent years taking every reasonable step to see that the information she has goes through the proper channels. The Supreme Court refused to hear her whistleblower lawsuit, even in light of the Department of Justice forcing the removal of both her and her own attorneys from the courtroom when they made their arguments concerning why it was that she still had to remain gagged under the “States Secrets Privilege.”

On the morning that the SCOTUS refused to hear her case, the facade cracked on the front of the building. In a ridiculously ironic metaphor which would have been rejected by any credible screen-writer, a chunk of marble — just above an allegorical statue representing “Order” and just below the words “Equal Justice” — came crashing to the ground.

She has met with, and told her story to, U.S. senators including Republican Charles Grassley and Democrat Patrick Leahy, both of the Senate Intelligence Committee, both who found her extremely credible. 60 Minutes producers may remember when Grassley told them, “Absolutely, she’s credible…And the reason I feel she’s very credible is because people within the FBI have corroborated a lot of her story.”

In fact, the FBI itself has done so. Their Inspector General found her allegations, as described in the unclassified version of his report, to be “credible,” “serious,” and “warrant[ing] a thorough and careful review by the FBI.”

As far back as 2002, Grassley and Leahy co-wrote letters on Edmonds’ behalf to Attorney General John Ashcroft, FBI Director Robert Mueller, and DoJ Inspector General Glenn A. Fine, calling on all of them to take action in respect to the allegations she’s made.

“Certain officials in this country are engaged in treason against the United States and its interests and its national security,” she said during an interview an August 2005 interview on Democracy Now. That comment followed 60 Minutes‘ revelation years before alleging that Edmonds had information revealing that a “Turkish intelligence officer” she worked with at
the FBI “had spies working for him inside the US State Department and at the Pentagon.”

She’s briefed many legislative offices — as well as the 9/11 Commission — in regard to her claims, and now, she says, she’s even prepared to tell the media “the names of every single Congressional office who has received the names of the witnesses” to the crimes she’s detailed.

When we spoke last week, Edmonds seemed to reserve most of her frustration for Congressman Henry Waxman’s office. Waxman is the Democratic Chairman of the U.S. House Government Reform and Oversight Committee.

After briefing members of his security-cleared staff “inside the SCIF” — a high-security room in the U.S. Capitol, specially created for discussion of highly sensitive information — Edmonds says she was told on several occasions, prior to the 2006 Election, that her case would be one of the first heard in his committee, once he became Chairman.

“I even gave names of former and current FBI agents who were willing to go to Waxman’s office and give more information on all of this,” she said.

“Before the elections, I had a promise from Congressman Waxman’s office.” She claims they told her, before the election, “the only reason they couldn’t hold hearings, was because the Republicans were blocking it.”

“They said ‘your case will be one of the first ones we will hold investigations on,'” she told us. Now, however, since the Democrats have become the majority in the House, Waxman’s office is “going mum.” They won’t even respond to her calls.

The congressman’s office did not respond to several requests for comment on this story.

Aside from the allegations she’s already made concerning Hastert, as we reported in some detail in early 2006, following up on a Vanity Fair exposé in 2005, Edmonds says there are at least “two other well-known” members of Congress that she’s prepared to name as well.

“There are other Congressional people, whose names have not come out,” she explained. “As [Waxman’s office knows] I’ll be able to give them file numbers and investigations, including investigations by the IRS. I will be giving details one by one, not just allegations.”

“But,” she added, “unfortunately nobody wants to have an investigation like that.”

For the record, she told The BRAD BLOG, the other two “well-known members” are from the House, both Republican, and “one of them is recently no longer there.”

So far, she says, “those names have not been public.”

Since leaving the FBI, and in the wake of her years-long ordeal, which she frequently describes as “Kafka-esque,” Edmonds has founded the National Security Whistleblowers Coalition.

In addition to the support she has received, at various times, from members of Congress, she’s received a great deal of support from members of the national security whistleblower community and government watchdog organizations.

As we reported last Spring, Veteran FBI counterintelligence agent John Cole has said he’s “talked to people who had read her file, who had read the investigative report, and they were telling me a totally different story” than that given publicly by FBI officials. “They were telling me that Sibel Edmonds was 100 percent accurate,” he said, “management knew that she was correct.”

Famed “Pentagon Papers” whistleblower Daniel Ellsberg has described Edmonds as “extremely credible.” In a 2005 interview on KPFA, Ellsberg said, “FBI agents we’ve talked to have, in every respect that was raised, have confirmed her story – that she’s a very credible witness.”

More than 30 groups, from across the political spectrum — including the Project on Government Oversight (POGO), Citizens for Responsibility and Ethics in Washington (CREW), the American Civil Liberties Union (ACLU), the September 11th Advocates, the Liberty Coalition, the Electronic Frontier Foundation (EFF), OMB Watch, Electronic Privacy Information Center (EPIC) and People for the American Way (PFAW) — all signed a letter in March of this year calling on the House Oversight Committee to “hold public hearings into the case of FBI Whistleblower Sibel Edmonds, and the erroneous use of the State Secrets Privilege to shut down all court proceedings in her case.”

That petition was sent almost precisely one year after The BRAD BLOG originally reported on a public petition to Congress, demanding they hold public hearings. More than 30,000 people, Edmonds says, have now signed that petition since it was first announced.

In a speech given over the Summer in D.C. at the American Library Association (ALA, video here), Edmonds detailed the “Kafka-esque” nature of her unprecedented gag-order. Among the information still-regarded as “classified” under the States Secret Privelege: the fact that she was a translator for the FBI, where she was born, what languages she speaks, the date of her birth, the universities she attended, and the degrees she earned.

In fact, the interview that CBS’s 60 Minutes aired with her in 2004, was later retroactively classified by the Department of Justice under the same “privilege”!

But enough is enough. She’s now ready to tell all. To the public. But not (yet) to us. She will speak, however, to any broadcast network that would like to have her.

“I have exhausted every channel. If they want to, they can bring criminal charges against someone who divulges criminal activity, and see how far they’re going to get.”

But will any of the corporate mainstream networks take her up on the offer? It’d certainly be an explosive exclusive.

“I don’t think any of the mainstream media are going to have the guts to do it,” she dared them.

So whaddaya say 60 Minutes? We’ve given you scoops before that you ended up turning down — and likely later regretted. Will you be smart enough to take this one?

“You put me on air live, or unedited. If I’m given the time, I will give the American people the exact reason of what I’ve been gagged from saying because of the States Secrets Privilege, and why it is that I’m the most gagged person in the history of the United States.”

“My feeling is that none of them have the guts to do that,” she dared them, before charging, “they are all manipulated.”

“I keep using the word Kafkaesque…” she paused, during her speech at ALA, clearly showing her exasperation, “because…,” she continued slowly, “…I really can’t come up with a better word.”