NORAD is the US-Canadian military agency responsible for defending North American airspace. Its traditional operating procedures – according to which planes are to be intercepted when they deviate from their courses, turn off their transponders, or permanently lose radio contact – were not followed on 9/11.

As the commander-in-chief of NORAD on 9/11, General Ralph E. “Ed” Eberhart was ultimately responsible for all of NORAD’s failures on 9/11 – most importantly, the failure to intercept hijacked airliners before they could strike the Twin Towers and the Pentagon. The fourth airliner, UA 93, which was reportedly headed towards the nation’s capital, may have been shot down by NORAD, but NORAD has denied this. Accordingly, the official story about 9/11 is that NORAD was four-for-four in failing to intercept hijacked airliners that day.

Nevertheless, in spite of NORAD’s disastrous failures under General Eberhart’s leadership, he was never held accountable or even criticized. Indeed, he was promoted shortly after 9/11 and later called a “9/11 hero.”[1] 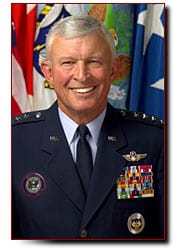 Unlike others, such as Gen. Richard Myers and Gen. Henry Shelton, Eberhart has not written an account of his actions on 9/11. Likewise, he was seldom discussed by the 9/11 Commission. Accordingly, we do not know much about his actions that day. But enough has been said and reported by officials and the media to add up to an official story about his actions.

An examination of the evidence shows that Eberhart, rather than being considered a “9/11 hero,” may well be the opposite. This evidence can be divided into two categories:

2. Eberhart also caused delays by virtue of his actions and omissions

The official story about Eberhart contains the following elements, discussed in the order they appeared in the summary above:

Accordingly, the official account about Eberhart contains inaccuracies, extraordinary claims, and actions and omissions through which the interception of the hijacked airliners would have been delayed.

There were additional irregularities regarding Eberhart’s actions, omissions, and statements:

Eberhart made several statements that were clearly false and others that were at least highly implausible, including:

Eberhart also caused delays through his actions and omissions:

In short, Eberhart did nothing effective in response to the 9/11 hijackings – despite being present in the military’s teleconference as those hijackings were in progress – except to delay responses.

Considerable evidence points to Eberhart as having been derelict in his duty.[36]

A formal investigation should be launched to see if there is any other conclusion that could be reached.

[7] General Myers confirmed that shortly after Eberhart’s call the Pentagon was hit on his way back to it. Source: “Panel I, Day II of the Twelfth Public Hearing of the National Commission on Terrorist Attacks Upon the United States.” Chaired by Thomas Kean, Chairman, June 17, 2004.

[19] “No reason was ever given (or requested) for why Eberhart did not fly directly to CMOC from Peterson, making use of the Cheyenne Mountain helicopter port,” Kevin Ryan, “The Case Against Ralph Eberhart, NORAD’s 9/11 Commander,” January 12, 2013.

[22] Bob Arnot, “What Was Needed to Halt the Attacks? Cockpit Security, Quick Response Not in Evidence Tuesday,” MSNBC, 12 September 2001.

[26] Transcript of Hearing Before the Committee on Armed Services, United States Senate, October 25, 2001.

[36] Dereliction of duty is a specific offense under United States Code Title 10,892, Article 92, and applies to all branches of the US military. A service member who is derelict has willfully refused to perform his duties or has incapacitated himself in such a way that he cannot perform his duties (as when Eberhart took his long drive). Article 92 applies to service members whose acts or omissions rise to the level of criminally negligent behavior (“Dereliction of Duty,” Wikipedia, accessed August 2014).