Is Rudolph Giuliani’s political career over?

The former mayor of New York City has been making his rounds in U.S. media this week, trying to explain away his false claim that there were no domestic terrorist attacks on the United States during the Bush administration.

For a man often mocked as “the mayor of 9/11,” that’s an awfully bold suggestion, and one that could spell the end of his relevance in U.S. politics, according to MSNBC host Rachel Maddow.

“The whole reason anybody ever thought of Rudy Giuliani as a potential national figure for the Republican party is because of his supposed expertise,” Maddow said during a Friday broadcast. “The supposed expertise he had with terrorism and national security because he had been the mayor of New York City when it was attacked on September 11.”

He later explained that he meant say no domestic terrorist attacks since 9/11.

However, in what Maddow called “a strange colique” with CNN host Larry King, Giuliani dug his hole deeper, suggesting that shoe bomber Richard Reid attempted his act of terrorism before Sept. 11, 2001.

It actually took place in Dec. of that year, well after the attacks on New York and Washington, D.C. 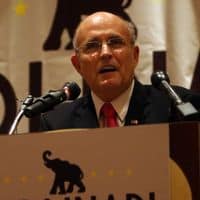 “Rudy Giuliani’s whole brand as a politician is based on 9/11, something he appears to have exploited so much that he’s lost the capacity to deal with it as a factual matter,” Maddow opined.

“Could he have meant that there were no other attacks that were considered by the Bush administration to have been terrorist attacks?” she asked. “Well, he couldn’t have meant that either because the 2001 anthrax attacks were later described by Bush attorney general John Ashcroft as a ‘terrorist act’. Maybe he thought the victims of the anthrax attack were dispersed over too large an area to count as a terrorist attack or something. But then, you know, there was the D.C. sniper case: 10 people gunned down in the Washington, D.C. area in October, 2002 by a pair of snipers, one of whom was later convicted on terrorism charges.”

“There is no possible way in which he is making sense, unless he was seeing if he could get away with a mix of political fantasy and political spin,” she concluded.

Raising the odd spectacle of both former Bush spokeswoman Dana Perino and GOP strategist Mary Matalin conveniently forgetting that 9/11 happened during the prior administration, Maddow theorized aloud about things that happen “in threes.”

“I wonder if the next ambition in political spin is to convince us all that 9/11 didn’t happen while George W. Bush was president and Dick Cheney was vice president,” she said. “Is that the plan?”

Rudolph Giuliani did it again at a Trump rally:

“Under those eight years, before Obama came along, we didn’t have any successful radical Islamic terrorist attack in the United States,” Giuliani told the crowd.