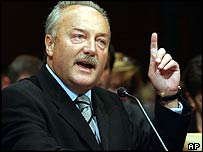 I am writing this open letter to call your attention to the remarks made yesterday, May 17, 2005, to the United States Senate, by British MP George Galloway of the independent Respect Party. I do this because he serves as an example of why your party should be abandoned by the U.S. working class, by U.S. women, by oppressed nationalities in the United States, and by anyone who professes to be a progressive or a leftist.

George Galloway did that for which you have proven incapable; he spoke as an opposition. Since there seems to be a great dark space in the middle of your heads where the notion of opposition should be — a void filled by parliamentary molasses and the pusillanimous inabilty to tell simple truths — I suggest you all review the recordings of Galloway’s confrontation with Republican Senator Norm “Twit” Coleman to see exactly how effortless it is to stand up to these cheap political bullies. While you are at it, you can watch your colleague Carl Levin demonstrate exactly what I mean about most of you and your party, as he alternately hurls petulant cream-puff insults at Galloway and kisses Coleman’s stunned, clueless ass to give that toothy dipshit some comfort in the wake of Galloway’s verbal drubbing.

Galloway didn’t have to walk up to the docket and slap the cowboy shit out of Coleman — though I admit I still struggle with my own secret urges to do just that with most of the air-brushed, combed-over, Stepford meat-puppets who now people the United States Congress. No, all Galloway had to do was tell the unvarnished truth, and it had exactly the same effect. If Democrats had half the spine that Galloway does… if you would stop chasing your creepy little careers through the caviar and chicken-salad circuits of duck-and-cover American political double-speak, then not only would people like me not be calling for all to abandon the Democratic Party and take their fight to the streets like good Bolivians — not only that, but you’d have won the last election.

The reason Galloway was able to break from your mirror party in UK — Blair’s sell-out Labor Party — and still get elected, is that Galloway fights for his convictions and the real needs of his constituents, and doesn’t run for cover every time the bully-boys of the capitalist extablishment attempt to take him down.

People follow those who speak plainly and fight. Aside from Maxine Waters, Barbara Lee, and Cynthia McKinney (not surprisingly Black women who know where it goes if you let rich white men get away with giving you a bunch of shit) and a precious few others, the Democratic Party is not only just another party controlled by big capitalists; it is not even a good *capitalist* opposition party (much less a real opposition).

You don’t deserve anyone’s support, not even as a tactical matter any longer, because you end up doing ritual verbal combat then giving the “cornpone Nazis” of the Republcan Party any goddamn thing they want. That’s why Galloway rhetorically spanking that soap-opera-looking shitbird was the most satisfying thing many of us have seen in months.

That’s exactly why some of us are saying go Bolivian on their asses. Tell the Democratic Leadership Council to eat shit and die. Stop working, stop obeying, block the streets and highways, shut down the capital, and watch them choke on their own sewage. If Americans weren’t so bewildered by television, so addled and soft from junk food and cars and electronic appliances, and so addicted to their own cultural superficiality, they might begin organizing general strikes: women’s strikes, workers strikes (without union bureaucrats to calm them down), Black people strikes, Brown people strikes, info-tech strikes, eco-strikes, all working our way up to One Big Strike.

It’s a ways off, but it’s coming. Of course, there won’t be any Democrats there. They’ll be wringing their hands about their defunct careers, and conducting focus groups to see how they can shift further to the right in the next election.

And the reason this doesn’t happen is that people still hang their thin hopes on you, on electing Democrats who stab them in the back the first chance they get. But Galloway’s appearance before the U.S. Senate moved us an inch closer to the Big Strike and an inch further away from your worthless asses.

Because Galloway didn’t, as some are saying, expose the Republicans.

Someone with a full frontal lobotomy could expose a Republican politician.

He exposed the spinelessness of the Democrats.

(My thanks to James Howard Kunstler for the term “cornpone Nazi.” I’ve known quite a few… even been related to some of them.)

Pseudoscience & the “study” of “conspiracy beliefs” from message board postings

A 9/11 Re-Investigation and the Power of Consensus Statements

An Open Letter To Bill Moyers