Home Activism 9/11 Truth Movement The Hard Evidence Down Under Tour 2009 – An Amazing Success!!

The Hard Evidence Down Under 2009 Tour has nearly wrapped up, following events in Sydney, Melbourne and Brisbane, Australia and in Wellington, New Zealand. Every one of these events met with overwhelming success.

John Bursill, Principle Organizer of the tour, and his ‘backup crew’ made up of scores of dedicated, generous, passionate volunteers planned and executed a very significant series of events that resulted in the presentation of 9/11 truth information, in person, to approximately 1,200  people and along the way, radio interviews and news stories reached at least tens of thousands more. Kudos and much gratitude are in order to John, his wonderful, patient wife and family, to Helen in New Zealand who coordinated the Wellington event, and the many volunteers who gave so much to make this important tour happen. Of course, huge, sincere thanks are in order to the event sponsors whose very generous financial contributions made possible travel from the United States by presenters Richard Gage, AIA, founder of Architects and Engineers for 9/11 Truth, Professor Steven Jones, emeritus professor of physics, founder of Scholars for 9/11 Truth and Justice and co-editor of the Journal
of 9/11 Studies
, Cosmos, founder of TruthAction.org and the massive “Eleventh Day of Every Month Till Justice” campaign, Luke Rudkowski, founder of WeAreChange and Janice Matthews, Director of 911Truth.org  and small business owner, so that we could present in Sydney.

In addition, Ken Jenkins and hummux, of 911TV.org, were brought from the U.S. to record the proceedings and manage our sound production, with the help of an incredible lighting crew and volunteer camera operators who brought it all together. (Video of the Sydney proceedings will be available via TheHardEvidence.com and 911TV.com soon – we will announce that as soon as details are available.) Sunday’s event, which focused on the activism needed to propagate the hard evidence presented to an audience of about 220, including many professional architects and engineers on Saturday, also featured presentations by Ken Jenkins of 911TV.org and the Northern California 9/11 Truth Alliance, Hereward Fenton of 911oz.com and Truth News Radio Australia, and Dr. Frank Legge, Chemist, co-editor of Journal of 9/11 Studies who also manages Scienceof911.com.au. A panel assembled Saturday afternoon also included the participation of James O’Neill, practicing barrister in Queensland, who offered commentary on potential legal proceedings and Dr. David Leifer, Doctor of Architecture and Associated Engineer, Senior Lecturer at Sydney University. 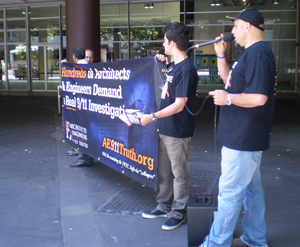 The tour kicked off on Wednesday, the Eleventh of November, with a rousing street action in front of the corporate offices of ABC, Australia’s national television conglomerate, which happens to be across the street from University of Technology, Sydney. We were able to disseminate information to a significant number of  ABC employees, some of whom rather clandestinely asked for our information (although they’d apparently been told to not take our materials, according to one such employee), a few intrepid journalists who showed the courage to stop and talk, and hundreds of passersby. Sydney is a very ‘international’ city, especially there near the university, and we had very engaging conversations with people from around the world, most of whom were well aware of and distressed by the continuing questions surrounding 9/11. In addition, a substantial conversation was held with a very pleasant, intelligent and supportive engineering professor, which we hope will lead to inroads into the faculty and administration there. From ABC’s offices we moved downtown, to a median in the very center of the city, where we again called out to people and shared information with the delightfully happy and often humorous, diverse populace of Sydney. Standing together with people whose ages, professions and personalities run the gamut, with our different interpersonal styles and approaches to conversation and street action, was another encouraging example of how we, the People, continue to be able to discard the false “divides” of ideology and politics that have previously kept us separated, and stand firmly, united with a common message of peace and justice.

The hundreds of 9/11 truth group organizers affiliated with 911truth.org, truthaction.org and wearechange.org continue to hold these actions monthly (and much more often, in many cases) around the world and there is no question that our efforts remain extremely valuable and effective. While all our investigative compiling of information and our internet activism that makes it widely accessible is of course integral to our efforts, there is simply no substitute for dialogue, one human being with another. In fact, John Bursill reminded me the Sydney group was the first international group to become active with the Eleventh Day of Every Month Until Justice campaign. They continue to carry out these actions each month, which have also spread to Perth, Brisbane, Melbourne, Wellington and Christchurch. John was quite inspired by the quote from Dan Wallace, whose father was killed on 9/11 and was one of the first activists in New York : “They took it from the top to the bottom. We’re going to take it from the bottom to the top.” This Down Under Tour is further fulfilling Dan’s hope, carrying the movement back up from the “bottom” of the globe back up to reinvigorate energy within the U.S.

After Sydney’s weekend event, Richard Gage, AIA, continued on his Australasian tour, to Melbourne and Brisbane, then Wellington, New  Zealand, and will be on to Japan in early December. The Melbourne event brought out about 220 people, with 170 in Brisbane. Wellington was a stunning success, with approximately 650 people attending the event in the main theater and an overflow room where live A/V was made accessible, and another 150 or so turned away for lack of seating. Thanks to the generosity of activists, again, everyone turned away was sent home with a copy of AE911Truth.org’s DVD, “9/11: Blueprint for Truth”. This gathering constituted the largest ever audience to date for a 9/11: Blueprint for Truth presentation, and succeeded, again, because of the perseverance of a few good activists like Helen Waddington. Thank you!! Truly, we are being the change we wish to see, and our efforts are getting results.

Although media coverage was essentially nonexistent in Sydney, in spite of a very professional press release having been disseminated to all press in a timely manner prior to the event, WSFM radio in Sydney did host Richard after the event for a brief but lively conversation, followed by the station posting a poll at their site asking whether “Gage makes sense.” WSFM replayed this interview on Saturday morning as part of their weekly highlight show, and reported receiving overwhelmingly positive response from listeners, thanking them for the broadcast. In addition, Kim Hill, mainstream corporate journalist with Radio New Zealand, conducted a rather less than flattering interview with Gage, and the tour was featured in a full-page articlein Wellington’s  The Capital Times. On November 24th, John Bursill joined Hereward Fenton on Truth Radio Australia for a wrap-up report on the tour and discussion of the costs associated with such an undertaking and the generosity of our  movement’s members, as well as a bit about the media: Listen here or download here. Hereward also conducted an interview with Gage, as well as a conversation with Luke Rudkowski and Cosmos before the event.

Photos of the event have been posted at truthaction.org, more at the 911oz forum and a bit of video at WeAreChange.org. A good review of the Wellington event, by Claire Swinney, has been posted here.And more about Gage’s continuing AustralAsian tour is being posted at his tour blog .

Obviously, 9/11 truth activism is indeed alive and thriving Down Under! Pressure on these governments to withdraw their support, and their troops, from the 9/11 wars and to reject U.S. imperial policy in general must continue and grow in intensity as this information becomes more and more widely disseminated and understood. Bravo and thanks to everyone there who continues steadfast in this work, and to the family members of those lost on 9/11 and in the ensuing wars who are finding the courage and now looking for ways to stand with their convictions in demanding investigation and redress for their loved ones’ deaths, perhaps through coronerial inquiries. John Bursill is prepared to hear from you, and to help you as you persevere in the path of grief to closure. (Please contact him at johnbursill [at] gmail (dot) com.) 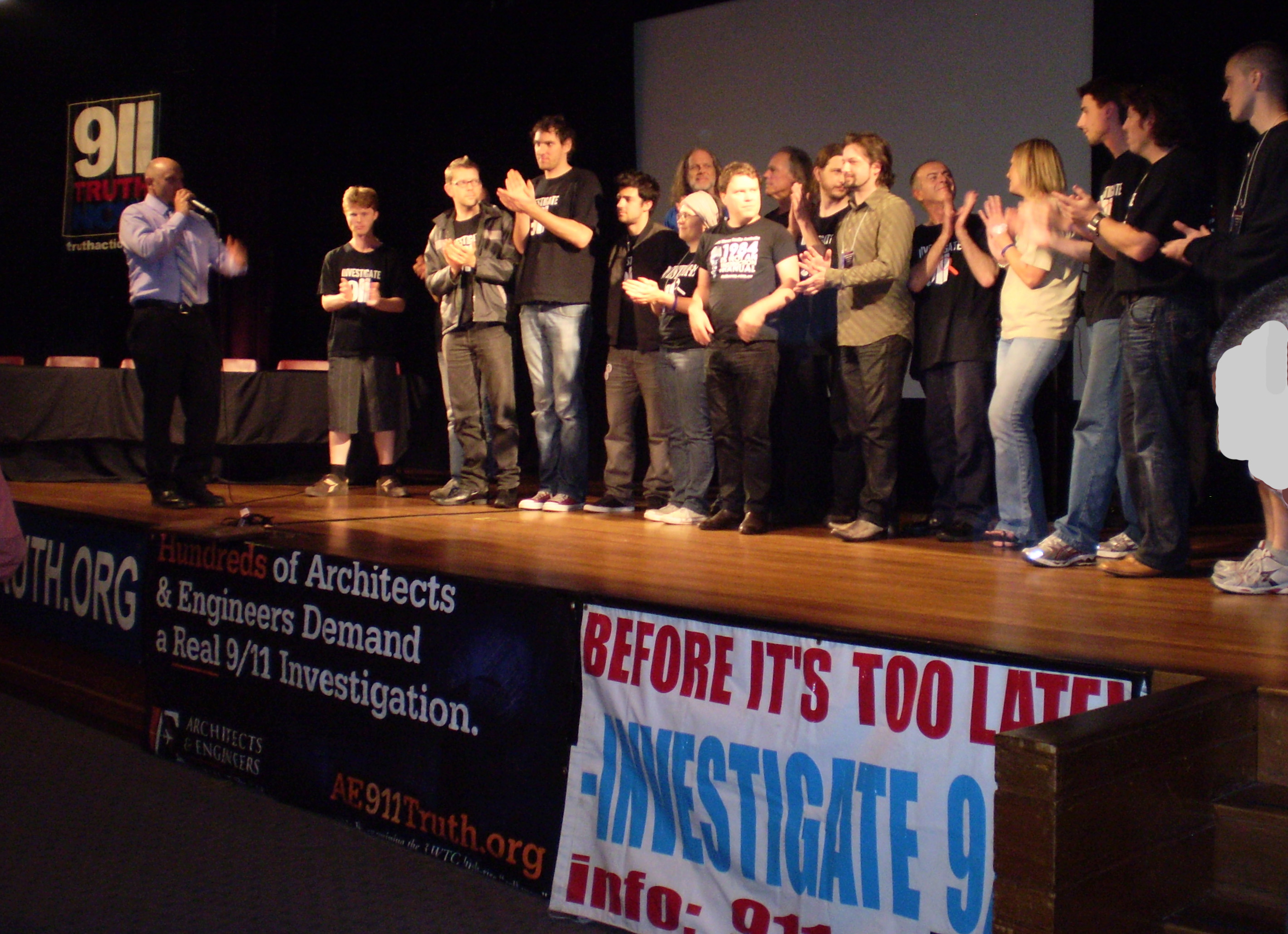 John Bursill is known to often remind us, “Truth is not an idea for people of worth; it’s a standard.” This tour has truly reflected John’s own high truth standard, and that of the many other ‘persons of worth’ who worked alongside him to help bring this about. It reflects well upon us all, and I once again find myself thoroughly impressed with and extremely proud of the passion, dedication, compassion and commitment exhibited by my fellow 9/11 truth advocates around the world. Toward the day when we see that light, indeed, prevails over might!