For all of us who live in the Boston Area,

Our Annual Hi-Way Blogging Event is a powerful means of spreading the Truth of 9/11/01!

For our 10th year in a row we are looking for Volunteers to hold our signs on the Turnpike overpass bridges in Newton on Monday September 12th from 3pm to 6:30pm (during rush hour).

This is our annual commemorative 9/11 Truth outing to inform the public that WTC buildings 1-2-7 were brought down by explosives and that the official 9/11 explanation is false!

We will be presenting our new sign “9/11 Truth for Peace” along with our other signs, “9/11 = Controlled Demolition”, “9/11 Truth Ends Wars of Occupation” “Did you know a 3rd Building Fell on 9/11” and the official Architects and Engineers for 9/11 Truth banner. 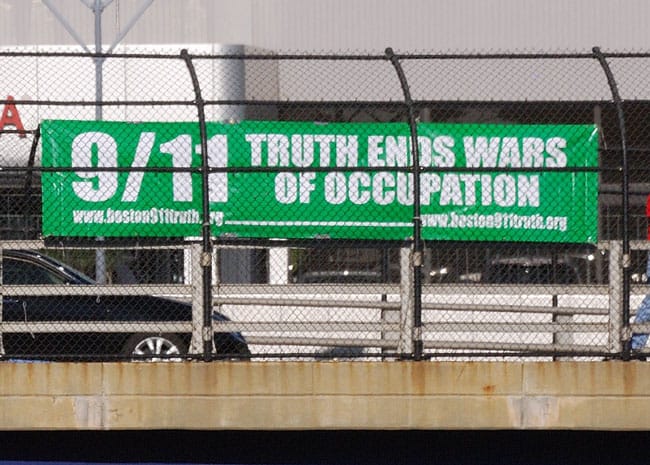 Why we need you

Each banner is either 20′ or 15′ long and has to be held up by poles in order to meet State Police regulations.   We need 12 people to hold up all the signs. And we will need additional volunteers to hand out literature to passersby.

We look forward to seeing everyone.

Our meeting place for our 9/11 hi way blogging will be the parking lot across from Shaw’s Supermarket – overlooking the Turnpike and just west of Walnut Street. Access to the parking lot is down the side street by StarBucks. If you are heading east on Washington St, take a right onto Walnut St. Once you go over the Walnut St. bridge over the Mass Pike, take your immediate right and we will be in the first parking lot on your left. Brings quarters. There are meters. Bring enough for 3 1/2 hours. 1 quarter = 1/2 hour.

Lance DeHaven Smith is emeritus professor at Florida State University, author of Conspiracy Theory in America and a creator of the SCADS concept (State Crimes Against Democracy). The concept explicitly includes the 911 attacks. When the academic journal American Behavioral Scientist published a special edition on SCADS and 911, it was one of the few times that truth activists have broken through the Western establishment’s 911 glass ceiling.

Reinvestigate 911 has arranged for a public meeting (to be confirmed) in London in which Lance Smith and Ian Henshall (911: The New Evidence) will discuss the significance of the official revelations on Saudi involvement in 911, the nature of SCADS and the Deep State, and what we can do about it.

This will be an opportunity for you to pick up leaflets for future use. 9/11 family member Matt plans to come down some time after 3.00

We will have a banner that reads:

5 years and three wars later…
now tell us the truth on 9/11
reinvestigate911.org

ISIS stands for Intelligence, Surveillance, Infiltration, Subversion. This is not only a campaigning tool but a truly professional play which should be in the West End. The key ingredients are all there: drama, acting, tension and even sex. 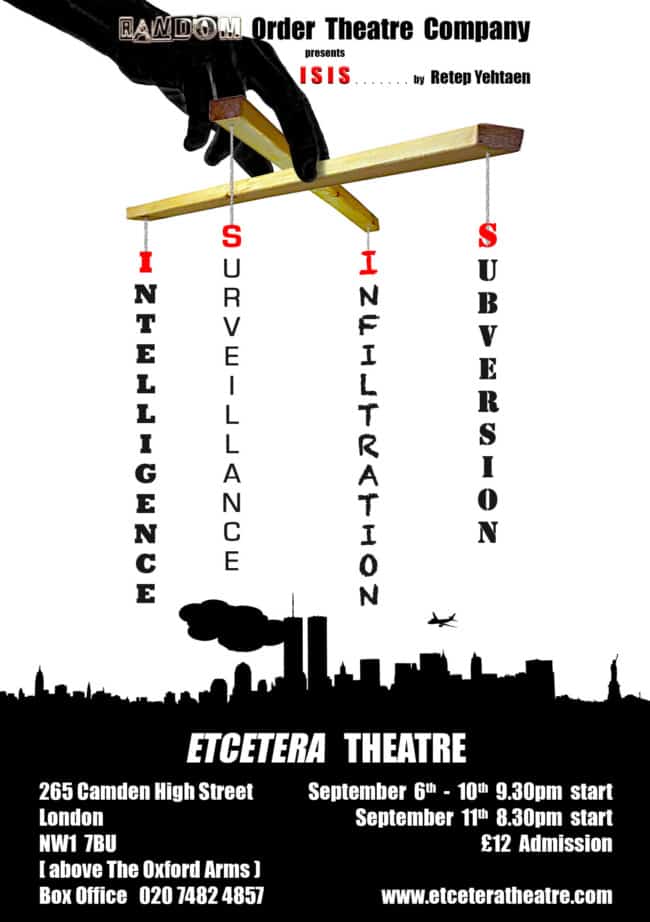 The last year has seen the MSM eat their words and admit there was a 911 conspiracy. The one they are admitting to at present puts only Saudi Arabia in the official frame, but many FBI officers and even Washington’s official watchdogs, the departmental Inspector Generals, confirm: the CIA’s top secret Osama Bin Laden unit was helping the alleged 9/1 hijackers too.

Who might have been behind the CIA/Saudi plot to help and protect the alleged 9/11 hijackers? Disgruntled officers making trouble to get some attention and budgets? Or was the criminal network controlled by the Bush White House and its belligerent neocon allies in the military industrial complex, Israel, NATO, Pakistan etc? Here’s a possible clue: we know that when it came to the great Iraq WMD hoax the CIA’s evidence was in that case fabricated by a neocon network: the Office of Special Plans based in the White House under Dick Cheney.  There are even suggestions from insiders like the FBI’s Ali Soufan that the torture of Al Qaeda suspects was part of the Iraq invasion plan too: to produce false evidence linking 911 with Iraq.