Home In the Media How Old-fashioned: the Fairness Doctrine, WTC7, NIST, and the Media

Once upon a time in America, the media would have presented the public with opposing views expressed by the professionals at Architects and Engineers for 911 Truth ( ae911truth.org ) when an agency such as the National Institute of Standards and Technology (NIST) exclaimed, after years of research, that simple office fires led to the unprecedented collapse of WTC 7

Circa 1949 – 1985, the media followed what was known as the fairness doctrine . Now reduced to nothing more than a propaganda slogan by Fox, there was a time when holders of broadcast licenses were required by the FCC to present fair and balanced coverage on controversial issues of public interest. After all, the airwaves are owned by the public. There once was a time when the media let the public evaluate controversial issues on the merits of the arguments presented. Twenty-one years after President Reagan vetoed Congress’ attempt to codify the Fairness Doctrine, many Americans still assume this doctrine holds sway.

After reviewing some of the more than 400 mainstream media articles written yesterday about the NIST final report on the collapse of WTC 7, it is easy to get 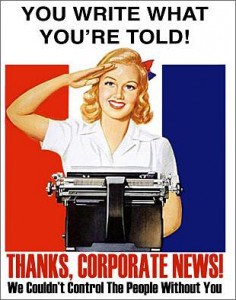 the impression that no credible alternative explanations exist. Why would any American question the NIST report? They have no exposure to opposing views expressed by professional engineers and architects. It is as if none exist if you rely on the mainstream media. Only two outlets quoted members of the professional organization, AE911truth.org. More outlets quoted me rather than reputable scientists. Go figure.

While many of the reports mentioned that NIST dismissed the possibility that explosives were used, not one outlet reported that NIST failed to perform a single scientific test for explosive residue. NIST ruled out the use of explosives because “… the noise associated with such an explosion would have been ten times louder than being in front of the speakers at a rock concert…”. There you have it–government funded science at its best. NIST also claimed that no loud noise was heard by witnesses . I guess they did not have access to the oral histories from the New York Fire Department made public after suit by the New York Times, the source for the quote by NIST that there were no witness reports of loud noises. There goes that liberal media again, always attacking the Bush administration at every possible turn.

Yesterday, while we were listening to the press conference hosted by AE911truth.org, we received many calls from media outlets inquiring about our take on what the NIST presented.

We provided these “journalists” with the number for the conference call and suggested they contact members of AE911truth.org to get the perspective of professional, credentialed engineers and architects. After reviewing the media accounts of how the WTC 7 mystery is now solved, it is apparent that not one of these “journalists” chose to report what these professionals had to say. Based on the misquoted snippet from 911truth.org interviews on the subject, it is clear they neither listened to the press conference nor contacted any of the structural engineers or architects to whom they were referred.

In the two and a half years as media coordinator for 911truth.org, I have learned that the reality created by the media is anything but fair and balanced. The producer of CNN’s Showbiz Tonight demonstrated more intellectual curiosity about why we continue to raise questions than most of the journalists I have encountered.

Earlier in the year, I received a call from a show producer at WOR radio in New York City, asking if I would go on the show to debate the host. I asked how much time we had for the debate. He said, without skipping a beat, 5 minutes. What kind of debate about the complex events of 9/11 can take place in 5 minutes? I accepted the offer on the condition that they play a few short sound bites I would supply in advance so that, at the very least, we would have a few specific issues to discuss. Here are the clips I sent for them to choose from, which include: President Bush at a town hall meeting, Ohio Senator Mark Dayton, Charlie Rose and 9/11 Commission Chairman Thomas Kean, Secretary of Transportation Norman Minetta and Commissioner Hamilton, Commissioner Ben Veniste questioning Condaleeza Rice, Missouri Representative Ike Skelton, Chris Matthews and Representative Dana Rohrabacher, George Tenet.

On the morning of the debate, the producer called to let me know that we were going ahead with the “debate” but the station would not play the sound bites. He told me that I could read the text of the sound bites but station management would not let me “program” the show. So let me get this straight, I can read what President Bush repeated at two publicly televised town hall meetings recounting his experience on the morning of 9/11 but the citizens of New York City could not hear him say it in his own words. When I suggested the possibility of media bias, he then told me the “host of the show did not know how to respond to the sound bites.”

The next day she called to tell me that it would not be possible for CNN to play the video. When I asked her why they would not play the video, she told me it was because “CNN had a policy of not showing collapsing buildings”. When I asked about this ridiculous policy, a policy they violated regularly on and between every anniversary since 9/11/01, I was referred to CNN’s Headline News PR person, Janine Iamunno. After several hours, I received her reply regarding this policy:

> –> > > Hi Mike, > > Thanks for your patience while I did some checking on this. Below is the statement we’re offering: > > “We vet using some images from September 11th on a case-by-case basis, but there is no overall prohibition against showing the towers collapsing.” > > > Regards, > > Janine Iamunno > Headline News PR >

When I called the booking agent for Glenn Beck to let her know there was no such policy and that they could show the clip, she said the producer did not want to show it.

It reminds me of what we were told about the media in Soviet Union–the people knew the media was government controlled, and had to read between the lines to figure out what they weren’t being told to get a sense of what was going on. Paul Craig Roberts recently asked whether we in the US now have “A Free Press or a Ministry of Truth .”

Given our experience, it certainly seems to be a valid question.