Hungry for Truth: One Man’s Struggle to Confront September 11, 2001 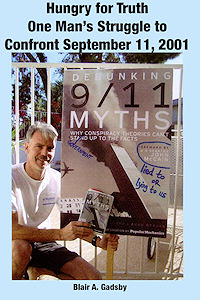 A personal journey into the world of activism for 9/11 Truth. Questioning the official story of the 9/11 attacks has many hazards, not least of which as a motivator to speaking up about “false flag” terror and the manipulation by governments of their populations to go to war. To a college professor of Religious Studies, seeing Islam portrayed as a religion of violence was spiritually and mentally degrading, not to mention socially destructive. This book discusses one person’s awakening to the lies told to us about 9/11 and how they compelled him to activism and a hunger strike against John McCain as he campaigned for President. McCain wrote the Foreword to Popular Mechanics‘ cover-up of 9/11. The author sat for 17 days outside the office of Senator John McCain waiting for an answer about 9/11 issues. He did get them, and the answers may foreshadow how “President McCain” will confront the requests for a new 9/11 investigation, conduct foreign policy, and his handling of the Middle East wars.