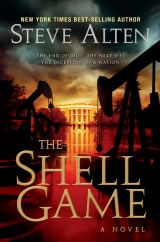 Written in the exciting, cloak-and-dagger style of Tom Clancy, the novel — The Shell Game — has a shot at educating a large segment of the American public who would otherwise remain in the dark about some aspects of 9/11.

Alten is well-aware of media censorship of 9/11 truth (for example, he agrees with this analysis, he also sent me an advance copy of the book), and is trying to break through the media blockade using his resume as bestselling author to spread his message.

I just finished reading The Shell Game, and caught up with Alten by email.

GW: I really like The Shell Game, Steve. It had me on the edge of my seat, and I stayed up later than I should have a couple of nights to finish it.

SA: My books tend to be … page-turners. The Shell Game does that and adds another twist … it’s all real, or it predicts what may really happen unless we stop the insanity. To stop it you must first be aware of it.

GW: If enough people read The Shell Game, it could bypass media censorship regarding 9/11 and reach people who would otherwise not be exposed to the facts. But if it doesn’t sell well, then it will simply be an entertaining read for those already aware of the facts behind 9/11. So how are your efforts to promote The Shell Game going?

SA: We’ve been getting copies into the hands of key 9/11 groups over the last six months. Now it’s up to them to create a buzz … along with my mainstream fans.

GW: The Shell Game reads like a mix of Tom Clancy, Robert Ludlum and Dan Brown. Are those 3 authors all influences on your writing?

GW: Your discussions about 9/11 will be familiar to those who have studied the issue. In addition to Michael Ruppert’s Crossing the Rubicon and David Ray Griffin’s writings, what other 9/11 writings do you like?

GW: My father-in-law says that people predicted Peak Oil decades ago, and were proven wrong. Does the discovery of the massive new oil reserve in Brazil change your conviction that Peak Oil is upon us?

SA: Unless it is as big as Ghawar … no. Oil IS running out. If not, do you seriously believe we’d have invaded Iraq?

GW: I’ve heard before that many of the world’s top microbiologists have been killed under suspicious circumstances, but I’ve never heard anyone link their deaths to an alleged plot to reduce world population through biological warfare. That was the scariest part of the book for me. Do you have any evidence that the elites are really planning a massive depopulation of this kind?

GW: Well, I hope you’re wrong. In any event, thanks, Steve. I hope the book does well.

We, the undersigned, urge everyone seeking truth, peace and justice, to not only purchase this new novel, “The Shell Game,” but also to email out this appeal to all you know who seek truth, peace and justice in the form of 9/11 truth coming out. In turn, please urge them to do the same with all their contacts and urge them to do the same. We can break 9/11 truth open if we work together and focus on this project for the next 30 days.