The call of duty has brought them together again, for one more vital mission.

But when the signal is given shortly before 10 a.m. today at the Constitution Center, 20 members of the Philadelphia chapter of Iraq Veterans Against the War will march once more. 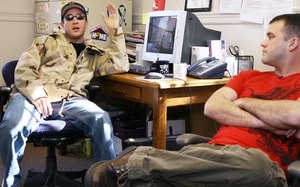 They’ll trek along Kelly Drive, past the Art Museum and Boathouse Row, across the Strawberry Mansion Bridge and continue out west until they meet about 90 other veterans at Valley Forge on Sunday afternoon.

Along the way, they hope to dispel a few myths about the Iraq war and give regular people an idea of the grim reality that their fellow soldiers still face overseas.

“We wanted to do something in solidarity that could send a message to the American people,” said Steve Mortillo, the president of the Philadelphia chapter of IVAW, who served in Iraq with the U.S. Calvary 1st Squadron Infantry Division.

“It’s been five years since the war started, and a lot of us have feelings that Americans only should die in combat if it’s a cause that’s going to save more American lives than it’s going to cost.”

Today’s march also will promote IVAW’s Winter Soldier: Iraq and Afghanistan, a three-day gathering for veterans of both wars that will take place next month in Washington, D.C.

The organization boasts more than 700 members in the U.S., Canada and on military bases overseas.

Mortillo said IVAW’s popularity has grown as soldiers – many of whom eagerly joined the military after the Sept. 11, 2001, terrorist attacks – have become disheartened with the seemingly endless, unnecessary conflict in Iraq, which as of Monday has claimed the lives of 3,973 U.S. soldiers.

“I drank the Cool-Aid for the Iraq war, and I think most people did, especially in the service. We expected that we would go in there, find weapons of mass destruction, oust Saddam and it would all be good,” said a 28-year-old veteran who declined to be named but served two years ago as an imbedded adviser in an Iraqi army platoon.

“We didn’t really listen to people who were experts on the Middle East who said the Sunnis and Shia have been fighting for 800 years, so the chances are that we’re not going to just fix those problems,” the veteran added.

While the war has continued to rage on, Iraqi civilians have grown increasingly tired of the U.S. military presence, said Jason Washburn, who did three tours in Iraq as a Marine squad leader.

“Right after the invasion started . . . I really think they believed in us and believed that we were going to help them. To be honest, so did a lot of us,” said Washburn, 28.

“I thought we’d get an area secure so the contractors could go into town and start building schools and give these people running water, but that never happened.”

Mortillo, 25, said that as the purported goals of the war shifted from finding weapons to spreading freedom, “no one was at the point where they’d stop doing their job, but we all pretty much understood that we weren’t there for the reasons they told us.”

Both veterans said many of their friends who are still serving in Iraq want to come home, but are troubled by a perceived lack of adequate care for soldiers with physical and psychological problems. *