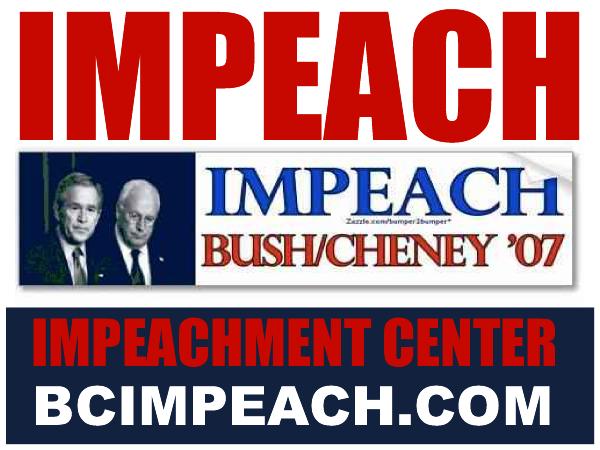 Wednesday, July 4th @ 11 am at Impeachment Center (see below)

Main Event is the follow-on Picnic

with speakers/entertainment at nearby La Cienega Park 12-3
pm

*Why: To Urge Los Angeles City Council , Santa Monica City
Council and CA State Congressional and Assembly Representatives to Pass a Resolution
Calling for the Impeachment of President Bush and Vice-President Cheney

*Where: 8124 W. Third Street (at the “Peace Center”
located by Crescent Heights & 3rd Street) ; 11 am inauguration will be immediately
followed by picnic at nearby La Cienega Park (Olympic & La Cienega) from
12-3 pm.

Leaders of the Westside Greens, the Progressive Democrats of Los Angeles, the
Los Angeles Greens, and the Santa Monica Democratic Club will officially inaugurate
an impeachment center to be followed by speakers who will address strategies
and ideas relating to the impeachment of George W. Bush and Richard B. Cheney.
The Impeachment Center will have phonebanking, letterwriting and other Impeachment
related resources available for distribution. Lawn signs, bumper stickers and
other literature will be made available to all who attend. Volunteers will discuss
tactics relating to both Impeachment and furthering the growing nationwide and
worldwide peace movement.

1. IRAQ: Pre-emptive War under False Pretenses in order to Effect “Regime Change” – Fabricaton of misleading intelligence; Americans Lied to in order to launch an Illegal Iraq to Congress, the Public, and the United Nations.

3. Aiding and encouraging the stealing of the Florida election in 2000 and 2004.

5. Violated Rights of Citizens including Habeas Corpus and other Constitutional rights.