In Saleh v. Bush, plaintiff Sundus Shaker Saleh alleges that the Iraq War was a premeditated war against the Iraqi people, the planning of which started in 1998. The war was not conducted in self-defense, did not have the appropriate authorization by the United Nations, and under international law constituted a “crime of aggression” — a crime first set down at the Nuremberg Trials after World War II.

If all goes well, the announcement of a start date to the Bush Administration trial could be just six weeks away 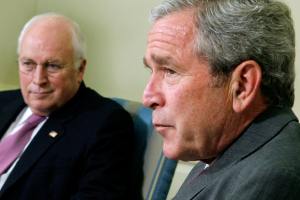 plaintiff Sundus Shaker Saleh. It is a noble attempt to hold the Bush Administration accountable for war crimes and a case that Quiet Mike has been following from the beginning.

Earlier this year, the Department of Justice, who is defending the six Bush Administration officials, responded to the lawsuit by requesting that the case be dismissed. The Bush tribe is claiming that the planning of the war occurred within the scope of their employment and therefore they have immunity.

Rather than dismissing the case, the Judge asked for additional information. So Mr. Comar filed a 2nd amended complaint back in June. The amended complaint provides more details about the planning of the Iraq war and when it started.

Comar’s evidence, shows the Bush/Cheney team started planning the invasion of Iraq as far back as 1997. The amended complaint also explains that the war was motivated by personal enrichment and the war was a “crime of aggression.”

Earlier this week. Inder Comar got his chance in court to respond to the motion to dismiss and explain the 2nd amended complaint further. He essentially made two points to the court.

The first argument he made was something called judicial estoppel. It prevents a party from taking a position in a case which is contrary to a position they have taken in earlier legal proceedings. In this case, Comar used the Nuremburg Trials as an example.

The second point that was made referred to the Augusto Pinochet trial. In 1999, British Lawyers determined that Pinochet did not have immunity for certain acts he committed while in office such as torture and other violations of international law. These Brits held that Pinochet was not immune because Chile had signed the convention against torture.

In light of the treaties and charters that the United States has signed, Comar stated that the defence can’t now claim that acts of aggression are above a leader’s authority. In this case, the Bush Administration.

What does all this mean? On August 15th, the United States will have the opportunity to respond to the second amended complaint. In the meantime, a hearing is scheduled for September 11th, of all dates. If the hearing goes ahead as scheduled, and if all else goes well, the announcement of a start date in the trial to hold the Bush Administration accountable could be just six weeks away.

If you are hearing about this case for the first time, you can follow its progress on Witness Iraq. You can also read up with our past articles. Please spread the word, too few people are even aware of Mr. Comar’s efforts. This case deserves all our support.

The Bush Administration on Trial June 16 2013

US argues Nuremberg “irrelevant” to immunity of Bush officials; hearing set for 11/13/14

Originally published at Witness Iraq on 8/19/14

In the latest round of court papers in Saleh v. Bush, Case No. 3:13-cv-1124 JST (N.D. Cal. Mar. 13, 2013), the United States has argued that the holdings from the Nuremberg Tribunal have “neither estoppel nor preclusive effect” and are “irrelevant” to the question of whether US officials are immune from suit based on allegations of aggression.

The United States continues to maintain that former Bush Administration officials are subject to dismissal based on a domestic law, the Westfall Act, that shields government officials from civil lawsuits for activities undertaken during the scope of an official’s employment.

Saleh argues that defendants Bush, Cheney, Powell, Rice, Rumsfeld and Wolfowitz acted outside the scope of their authority in planning and waging the Iraq War, which she contents was done in violation of US and international law. Specifically, she contends that these individuals committed aggression against Iraq, which was outlawed by the International Military Tribunal at Nuremberg, Germany, over 60 years ago.

The Court has also reset the hearing date from September 11, 2014, to November 13, 2014 in the Northern District of California.

Reply in Support of Motion to Dismiss